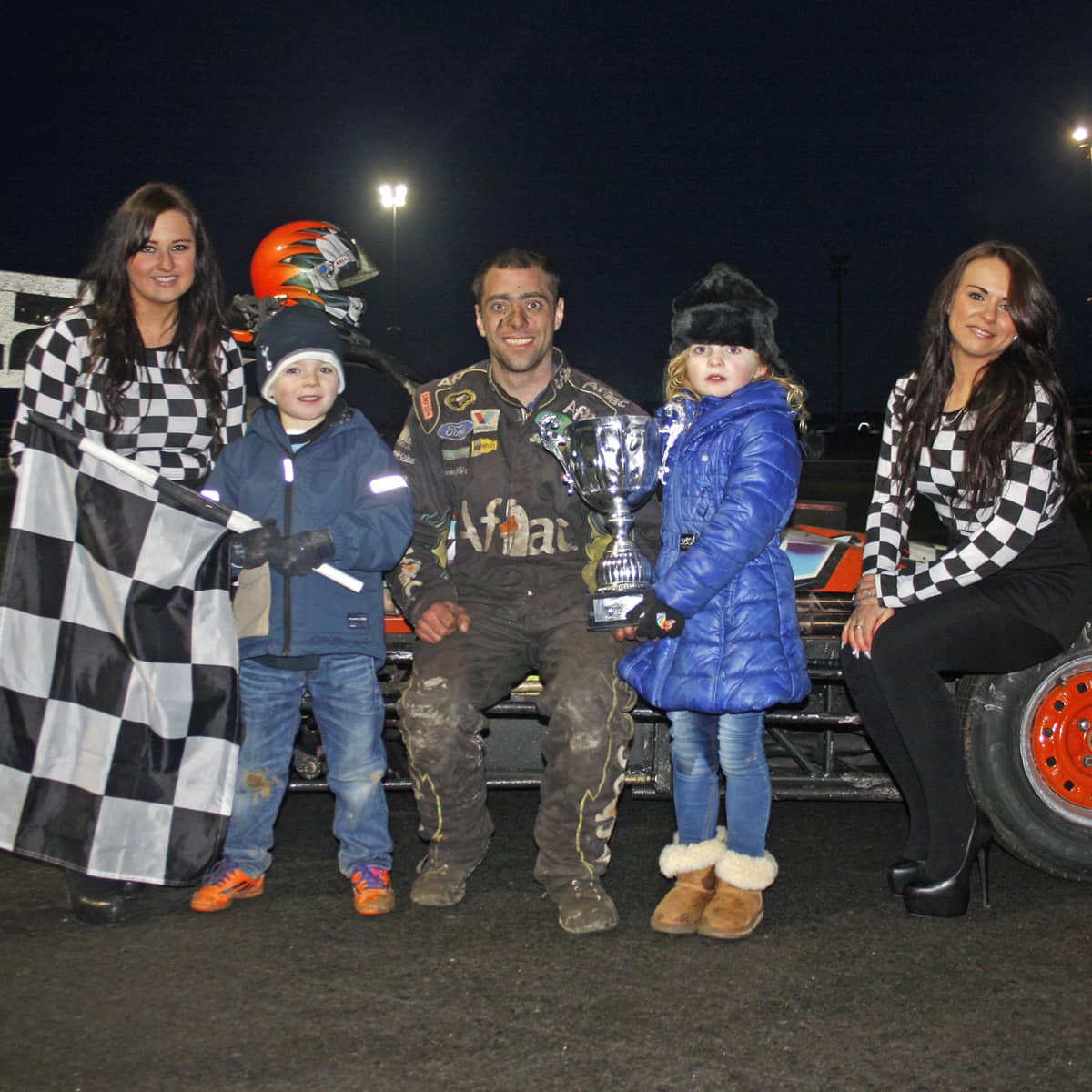 A cold but crisp festive Sunday at Tullyroan Oval brought a large crowd of hardy race fans along, and they enjoyed what turned out to be a very competitive and enjoyable afternoon’s racing. Headlining the Cirrus Plastics sponsored meeting were the Big Van Bangers, and their ‘Van-dalism 2014’ title fell to Dublin’s Steven Reynolds. Other feature race winners during the day were Gary Grattan (Superstox), Shane Murray (2.0 Hot Rods), Curtis Greer (1300 Stock Cars) and Adam McFall (Ninja Karts).

A healthy field of Big Van Bangers took to the track for the ‘Van-dalism 2014’ title, and after a very entertaining race it was Track Points Champion in the Bangers, Steven Reynolds from Dublin, who came through to land the victory. Pete Boyce had looked all set to take the win, only to be eliminated almost within sight of the flag. Behind Reynolds, Lee Johnston and Steven Haugh filled out the podium.

The Allcomers race saw Johnston in a clear lead as all hell broke loose on track, but he then got involved with a heavy shunt with Robbie Wright which ended his race. That opened the door for Paul Compelli to storm through to the win. The Destruction Derby for last van moving was another lively affair, with Johnston taking a huge T-bone for his efforts which was the pick of the hits. It came down to a shoot-out between Dubliners Compelli and Paul Gaffney, and it was Gaffney who took the win after a huge head on between the pair. Dave Haugh was named Entertainer of the Day, with Stevo McGrath taking Best Wreck with his LDV minibus.

The open wheeled Superstox coped admirably with the poor track conditions all day, and put on three hard fought encounters. Scarva’s Jeff Minish looked odds on for the heat one victory only to hit trouble late on, handing the win to Londonderry man Gregg Hyndman. Gary Grattan and Irish Champion Kyle Beattie were the placemen. Minish made no mistake in heat two, this time taking the win in his usual flamboyant style ahead of Grattan and Jack Gilpin. Gary Grattan won the Superstox Final At Tullyroan Oval on Sunday, he is pictured here receiving his trophy from Callum and Jessica Doak on behalf of meeting sponsor Cirrus Plastics

The final saw Grattan zip through to the lead after Neil Davison saw his advantage ruled out by a caution period. Beattie was slowly but surely clawing him in though, but the game looked up as they took the one lap to go marker. Down the back straight for the final time and Beattie was still a number of car lengths behind, but he amazingly threw his car into the bend to make contact with Grattan. He just couldn’t get enough on the leader though, and Grattan came through for the win after what was a great finish indeed. Beattie recovered from his half spin to still grab second, ahead of Hyndman and Gilpin.

Jack Boal took first blood in the 2.0 Hot Rods, as the powerful hatchbacks struggled to adapt to the tricky underfoot conditions. Behind Jack in that first heat came World Champion Shane Murray and Stuart Cochrane, before Gareth Thompson took the second heat in some style and by some distance too. Boal and Cochrane filled the places in this one.

Veteran Davy Potter led the opening laps of the final, and fought off advances from Thompson and Boal early on. Murray soon worked his way through to second, and showed just why he wears the gold roof of World Champion by sweeping right around the outside and into the lead. Allen Cherry also impressed on his run to second, with debutant Derek McMillan a fine third in his immaculate Tigra.

An improved turnout of 1300 Stock Cars produced some lively racing that went down well with the big holiday crowd. There was no quarter given and certainly none expected between the drivers as they traded hits throughout the afternoon. Despite the intense competition, Curtis Greer was the star of the show all afternoon, taking victory in both heats and the final. Chris Hamill and Willie Stewart chased him home in heat one, with Ivan Elliott and Stewart taking the places in the second race of the day.
The opening laps of the final were top drawer stuff, but Greer again raced through to complete the hat-trick in his rapid Nova. Hamill and Elliott filled out the podium. There are big hopes for the 1300 Stock Cars in 2015, and they can hopefully make the impact they are more than capable of.

The young stars in the Ninja Karts again served up some great racing, with Sam Percy the deserved winner in heat one on the debut appearance of his new SLS-built kart. Stuart Hanna and Jack Hazlett were the placemen, before star men Adam McFall, Aaron Ward and Matthew Nicholl took the top three places in heat two.

The final was yet another thrilling encounter, and after a late race stoppage it was McFall who burst through to take his second win of the day. Ward and Nicholl again completed the top three.

The next meeting at Tullyroan Oval is scheduled for Sunday March 1st when the feature race will be the 2L National Bangers Irish Teams Championship as well as Lightning Rods, Superstox and Ninja Karts.