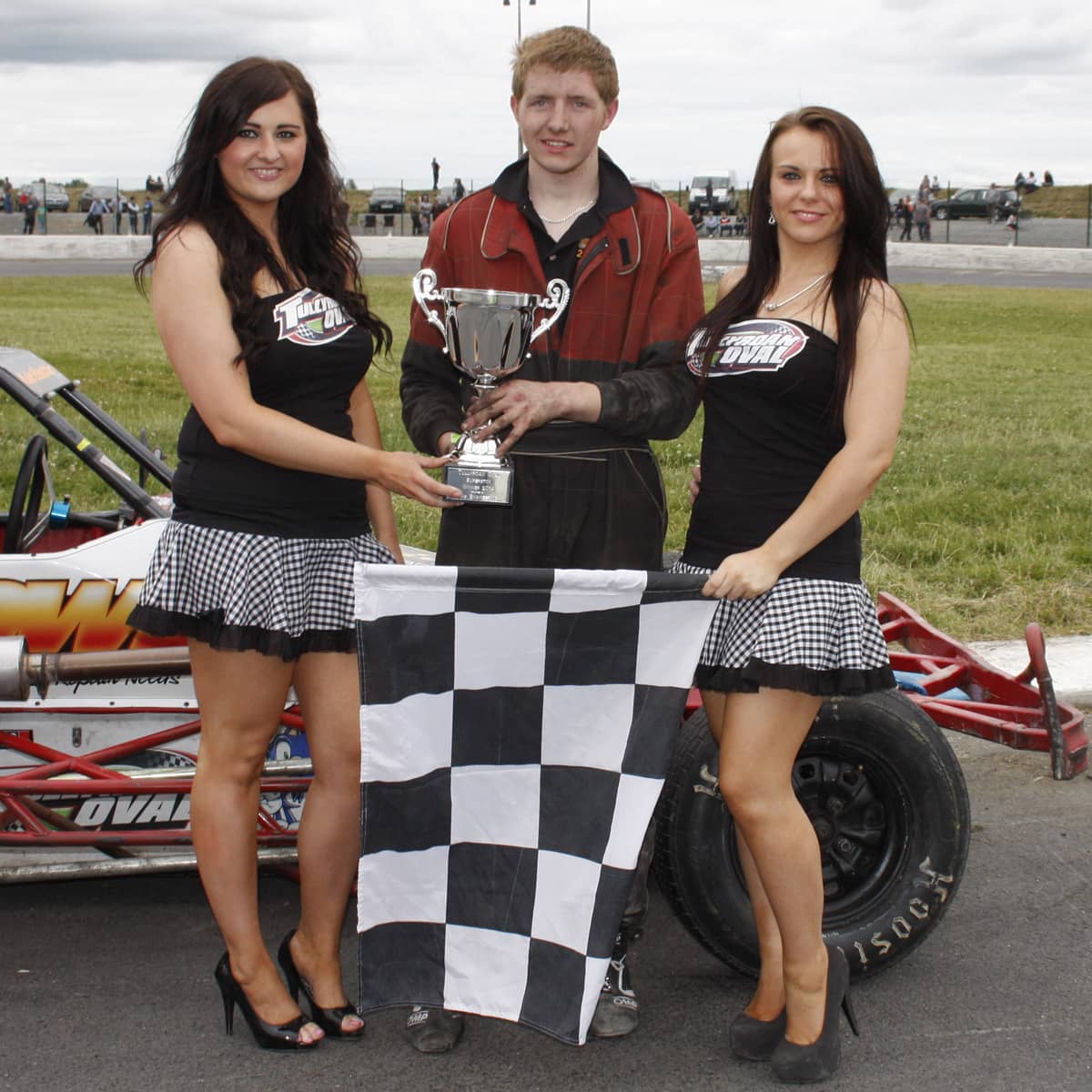 Another pleasing grid of Superstox saw former BriSCA F2 European Champion Graham Fegan join the ranks for the first time, and amongst the action packed racing it was Denver Grattan who raced through to take the opening heat win over Jeff Minish. Minish went one better in heat two, leading Grattan home this time with Stephen Stewart a deserved third.

Ryan McClure was the early leader in the final, but by mid distance Scarva man Minish had charged to the head of the field. A late race caution was called when McClure ended up in the wall on turn 2, but sensationally Minish was forced to concede the lead to Grattan as his clutch cried just too much. Beattie had other ideas though, and he coolly used his bumper to edge Grattan wide and take up the running. Grattan had a huge lunge back on the next turn, but it only succeeded in forcing his own retirement. Beattie took a well deserved win, with Gregg Hyndman and Gavin Fegan the placemen.

The young Ninja Kart drivers were contesting their Tullyroan Challenge Cup, with Ballymena’s Aaron Ward starting in fine style with a controlled victory in heat one over Adam McFall and Matthew Nicholl. McFall improved in heat two to take the win, with Shea Fegan and Sam McNiece the placemen.

The final was raced at breakneck speed by the primary school pupils, a despite a late challenge Ward was able to continue his recent run of good form with a finevictory. A new kart and a confidence boost from his first ever win on a recent trip to Scotland have worked wonders for the young racer. Fegan and McFall chased him home, and all three were kindly presented with their trophies and vouchers for the track shop by sponsor 2ke Engineering.

The King of Krash trophy was first up for the National Bangers, and it fell to Ballymoney’s Steven Bolton after a tremendous race with Dublin’s Steven Reynolds. Reynolds tried his best to remove Bolton by every means possible, but he was able to valiantly hang on to take the win. He then went on to lift the Allcomers race too, before Rodney Herron had a very popular win in the Destruction Derby as last car moving.

A first outing of the year for the Rookie Bangers saw Paul O’Connor from Dublin take a heat and final brace amongst some great, exciting racing from the drivers. Peter McConnell took the opening heat before O’Connor took over, with Paul leading Steven Rountree and Paddy Clerkin across the line in the Irish Masters final.

The Junior Productions rounded off the programme, where Edmund Davis and exciting newcomer Drew McKeown took the heat wins. The final saw tempers fray somewhat, but that was never going to deter Graham Fegan who raced through to the win in his rapid Corsa. Jordan Robinson and Shane McMillan inherited the other podium places after Davis and Irish Champion Bradley McKinstry were both docked positions by the Race Steward for infringements during the race.

All eyes now turn to the big Speedweekend, Saturday 26th and Sunday 27th July. Amongst a whole host of championship racing, the highlight will be the 2014 2.0 Hot Rods Championship of the World.