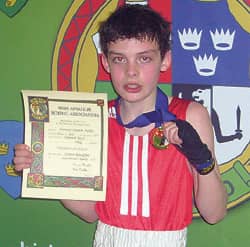 YOUNG Keady boxer Connor Renaghan claimed his first All-Ireland title after a victory over Wexford’s Willy Bolger in the National Stadium on Saturday.

The National Stadium in Dublin is the venue all young boxers dream of competing at but just to qualify for the All-Ireland series takes a serious talent. However, to go on and win is indicative of Connor’s talent and undoubtedly a star of the future.

Skill, determination, quick reflexes, fitness, brain and brawn are some of the things it takes to win an Irish title.

Connor showed he has all of these things plus a lot more. Many nights of hard training, sparring, bag work, pad work, and keeping to a good healthy diet, all played a part in this young man’s success.

Sometimes things were tough, but the tougher it got the harder Connor worked, his willpower and determination were second to none.

All of these attributes helped the young boxer on his All-Ireland journey.

After winning his Ulster final in Derry,  Connor’s name was in the draw with the other provincial champions, plus the Antrim and Dublin Champions. A little luck saw Connor miss the prelims and he was drawn to box the Munster Champion in the semi-finals.

Edward O’Donavon was the opponent. The Keady man started of a little nervously, the occasion had got to him slightly, and he was bit too cautious with his attacks although his defence was sound. At the end of a very cagey first round it was all square at one point each.

Gaining confidence as the bout went on Connor started to get the upper hand over the Limerick man. 3 points to 2 was the score after two rounds with Renaghan just edging it. Third round was another tight one but the Keady lad always looked in control and was getting the better of the exchanges of punches, his right hand over the top proving to be his best weapon. When the final bell rang Renaghan had won on a score of 6 points to 4 to leave him in the final against Willy Bolger from Wexford. Bolger, the Leinster champion had won his semi-final by the identical same scoreline as Connor, 6 – 4.

Saturday morning was the time for the finals. Renaghan was tuned in, switched on and rearing to go. Connor in the red corner, Bolger in the blue. First bell rings and the battle for the Irish title begins. Renaghan uses swift footwork to confuse his opponent, he throws plenty of long jabs but Bolger has a tight defence and is hard to get to. Connor tries to get his opponent to commit by using lots of feints. Its not easy and the first round is tied at one point each. Sticking to same tactics in the second, with lots of movement and feints Renaghan comes through the second round with a slight lead and the score is now 3points to 2. The third round is just as tight and Renaghan keeps his concentration. He starts to throw a few right hands in and they seem to be keeping Bolger away. With Bolger being overly cautious Renaghan starts to look more comfortable and confident. When the third round is over both corners look very tense while waiting for the result to be called out. Everyone knows its close, but the red Keady corner look a little happier than the blue corner. And the winner,and  Champion of Ireland, by 5 points to 4, Renaghan in the red corner. A mighty cheer goes up from all Renaghan’s supporters.

What a fantastic achievement by Connor Renaghan, who now by virtue of his All-Ireland win will begin training with the Irish boxing team and will hopefully soon have a few International bouts to add to his ever growing boxing CV.