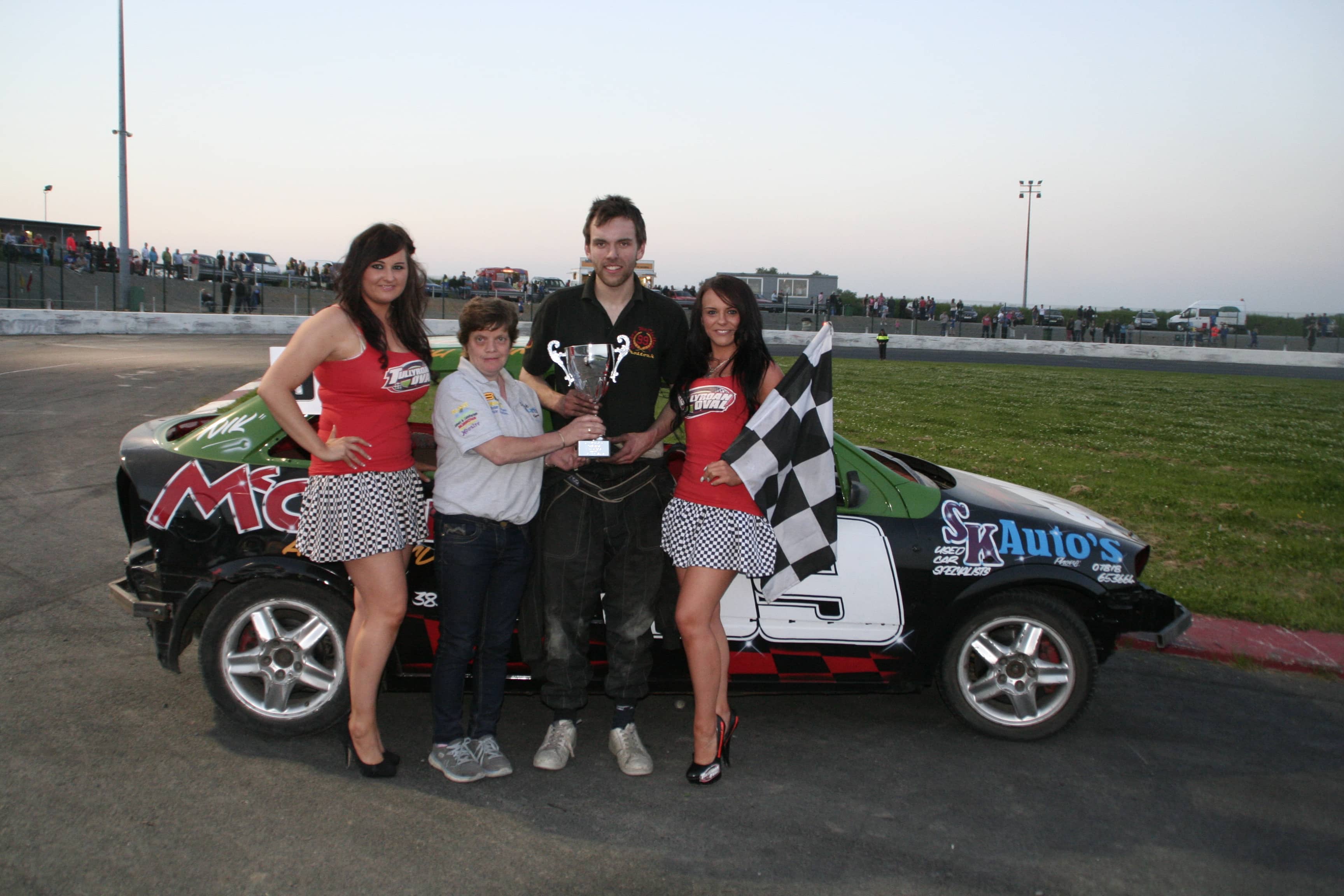 The on track action was every bit as hot as the weather, with other feature race wins going to Jason Cooper (Superstox), Mark Taylor (Lightning Rods), David McMenemy (2.0 Hot Rods) and Mark Crawford (Ninja Karts).

Once again the ProStocks provided a huge grid, with 37 cars in action making it a very packed grid indeed. Steven Haugh avoided all the spins and skirmishes to take the first victory of the day ahead of Ryan Fleming who was showing a welcome return to form, and Chris Hamill in third.

Novice grader Graeme Kinghan took victory in heat two, which will long be remembered for a huge accident on the start/finish line when Cyril Hawe became stranded across the track and got collected by the field, leaving Conor McElmeel and recent form man Allen Cherry to name a few badly damaged. Despite the yellow suspension period Kinghan held on ahead of Mark McLaughlin and Sam McKinstry.

In recent weeks Irish and Irish Open Champion Stefan McClelland has had a torrid time, firstly destroying his number one car in an accident and having to press his new charger into service sooner than he would have wished. The new Vauxhall came good in the final though, as he powered through from the back to land a decisive win and announce that he is most certainly back….and in style too! Fleming again was the runner up ahead of Dungannon’s British Champion Ryan Abernethy.

Another very healthy field of 2.0 Hot Rods were boosted by Darren McAlpine and Shaz Law from Scotland for the second round of the Wash ‘n’ Dash Challenge Series. As always the racing was top rate and sometimes too close for comfort, and after a multiple car accident which took out a number of the star grade in heat one, it was Philip Beatty who picked up where he left off the previous week with victory in the opening heat ahead of McMenemy and Irish Champion Derek Martin.

Mcmenemy improved in heat two to take the flag, but was demoted two places by the race stewards for illegal contact, handing victory on a plate to Gary Wilson. Cookstown’s James Turkington had his best showing to date as he inherited second ahead of McMenemy.

The closed grid for the final with McMenemy on pole as top points scorer was always going to be a classic, and so it turned out. McMenemy got the early jump but Derek Martin and British Champion Shane Murray were on his case right from the off. McMenemy withstood the enormous pressure on his rear bumper, until backmarking returnee Nigel McCauley needlessly got himself involved in the lead scrap. This caused major problems for the leaders, none more so than Martin who got shovelled right out of contention. McMenemy held on from Murray right to the line to take his own sponsored trophy after another great showing from the ‘2 Litres’, although Beatty inherited second and Stuart Cochrane third after Murray was docked for his part in the demise of Martin earlier in the race.

Former Superstox World Champion Jason Cooper from Norfolk paid us a visit on Saturday night, and promptly walked off with a heat and final double in the Superstox after a masterful display. The English ace powered through the field to take the win in the opener ahead of Gary Grattan and Denver Grattan, before Gary Grattan got the better of the Spedeworth Points Champion to take the flag in the second heat with Neil Davison an impressive third.

All was set for an interesting final, and in the opening laps there were some excellent bumper exchanges involving the Grattan’s, Cooper and his fellow welcome English visitor Matt Carberry. Through it all Cooper unsurprisingly came out on tops, and quickly ran down pacesetters Nathan Beattie and Davison to take up the running and record a faultless final win on his first ever track visit. Gary Grattan could take plenty of credit for his second and he will certainly show well on his upcoming mainland trips. Cooper was full of praise for the Tullyroan track and facilities during his post race interview, and promised to be back later in the year for the Irish Open Championship along with a large group of fellow English drivers.

On his return from a recent shoulder injury, Annaghmore’s Mark Taylor took a well deserved heat and final double in the Lightning Rods. ORCi Champion Brendan McConnell inherited the win in the opening heat of the night after Gerry Rogers had taken the flag but failed post race technical checks meaning he was loaded up for the night. Gordy McKee and Irish Champion Jordan Rochford were the place men. Taylor then took over for the next two races, taking the second heat handsomely over Gordy McKee and his brother Ben McKee, before try as he might Ben just couldn’t chase down the flying Taylor in the feature race. His double victory now means a rise to blue grade for next weekend’s racing. Aaron Stewart had one of his best runs in a while to grab third, ahead of Martin O’Flaherty in fourth.

The young 6-11 year old stars of the future entertained in the first Ninja Kart outing for a few weeks, and again a very healthy field took to the track including yet another newcomer in Lily Gallagher. It was another member of the ‘Girl Power’ brigade who was on top form, as young Sophie Willis showed the lads a clean pair of heels to sensationally win both heats! Matthew Nicholl and Stuart Emerson chased her over the line in the first heat, before Nicholl and Adam McFall were the placemen in heat two. Mark Crawford was the star of the final though, bursting through to the lead past early pacesetter Aaron Ward at the half way stage. Young Mark never looked back, and took his first ever final win ahead of Jack Hazlett and Willis.

Racing continues at Tullyroan Oval this Saturday night, June 15th, with The Les Beattie Memorial Meeting. On the racecard will be Lightning Rods, ProStocks, Stock Rods, Junior Productions and Ninja Karts, with the first race leaving the grid at 6.30pm.