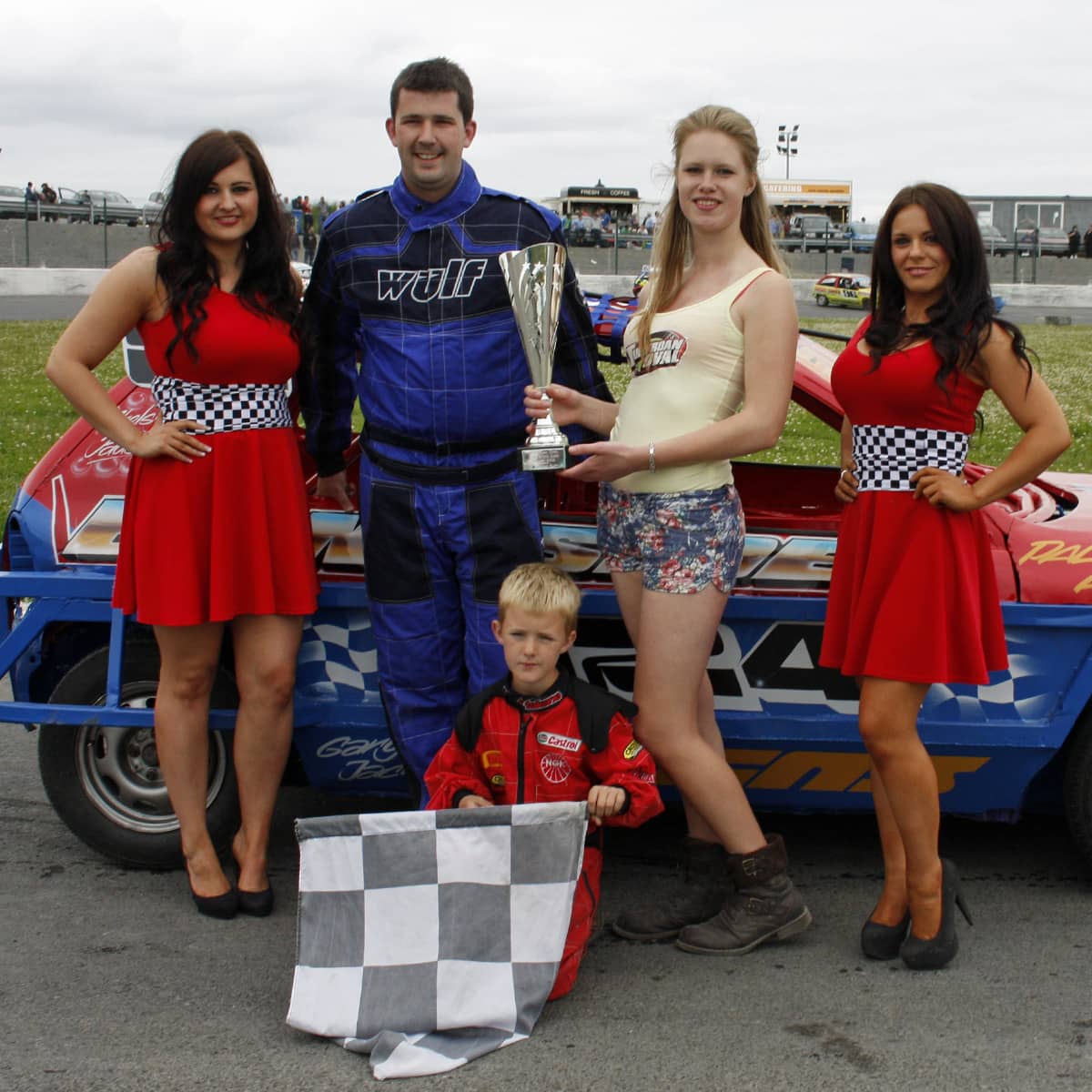 On a warm mid-summer afternoon at Tullyroan Oval, the on track race action was every bit as hot as the weather as the drivers battled through a fifteen race programme. Castledawson teenager Edmund Davis was on top form in the Junior Productions as he reeled off a faultless hat-trick to defend his Tullyroan Challenge Cup title. There was also a hat-trick for newcomer Ivan Elliott in the 1300 Stock Cars, whilst the other final wins fell the way of World Champion Shane Murray (2.0 Hot Rods), Bobbie Johnston (Stock Rods) and Alister Robinson (ProStocks). One of the best grids of the season assembled for the Tullyroan Challenge Cup for the Junior Productions, although disappointingly a couple of the regular faces were missing. Davis made short work of his row two start to scythe into an early lead in qualifying heat one, and he would lead all the way to the flag to get the first points of his afternoon on the board. Ethan Dilly< from the meeting sponsors Dilly Roofing Supplies, chased him home ahead of Co Waterford’s Ian Riordan. A superb opening few laps from Davis in heat two saw him quickly into the premier places behind leader Jordan Robinson. Davis nipped by before the flag to round out his second win and guarantee pole position for the final.

Such was the eagerness of the youngsters to get going in the final, a false start was called at the first time of asking. When they did get underway Davis quickly established a huge lead, whilst major challengers Robinson and Dilly clashed, leaving the latter out with a puncture and Robinson spun and right at the rear of the field. After a torrid time in the heats with two retirements, Shane McMillan worked his way through to land the runner up spot in the final, with Riordan a gallant third. Nothing could detract from Davis’ faultless hat-trick as he continues to underline his star quality.

With just over a month to their World Championship showdown at Tullyroan Oval, the 2.0 Hot Rods fielded an impressive 23 cars for this the second round of the TRM Tullymore Road Motors Challenge Series. Amongst the entry was a return for former double World Champion Wayne Woolsey in the ex-Dilly Citroen Saxo, now sporting the 950 number made so famous by his father Norman. Jeff Riordan, older brother of Junior Productions ace Ian, led the opening exchanges of heat one before losing out to Allen Cherry. Both were unable to hold back the fast moving Adam Hylands though, as the multi-champion surged through to take the win over Cherry and World Champion Shane Murray. There was drama aplenty in heat two, as Murray got turned around in the midst of a raging star grade battle. Joel Richardson was the man to beat in this one, but Hylands chased him all the way to the flag in second ahead of Mark Madill.

The final was lined up in aggregate points order from the heats, with Hylands and Richardson sharing the front row ahead of Cherry and Murray. Hylands set about putting clear air between himself and the rest, with Murray getting the better of Richardson to go second. Richardson then found himself spun on the Tullyroan end, and picked precisely the wrong time to rejoin – right in front of the leader! Murray capitalised on Hylands’ hesitation in an instant, slipping under him to take up the running. All the way to the flag the World Champion then had to fight a rearguard action against Hylands, unbelievably in a very similar situation to the opening round of the series a month previously. It was gripping stuff, but Murray held on to take the win and the new Hoosier tyre courtesy of the series sponsors. Hylands was left ruing what might have been in second, with Madill third ahead of Philip Beatty.

The front wheel drive Stock Rods really were the ‘real deal’ on the glorious Sunday afternoon, producing two excellent heats and culminating in a truly fantastic final. There was a welcome visit for Colm O’Sullivan from Tipperary amongst the entry, as well as a debut for Johnny Downes. Glenarm’s Bobbie Johnston moved past early leader Ryan Murphy after half a dozen laps and the former 2.0 Hot Rodder opened his account for the day with a pleasing win. Derek McMillan took second after edging out Frankie Lynn and Micky McFall. Former British and National Champion Lynn was the man to beat in heat two, with a splendid drive seeing him breeze past Johnston to pick up the honours. McMillan was again the runner up ahead of Johnston.

Murphy once again set the early pace in the final before Johnston eased ahead, and when the pack arrived on his tail so began an absolutely fantastic battle. After a few laps sizing up his prey, McMillan bravely hit the outside of Johnston, but Bobbie was resolute in his defence and held him at bay. Lap after lap they traversed side by side, with McFall and Lynn soon joining in too for good measure! On occasion Derek edged slightly ahead, but despite his best efforts Johnston just held on for his second win of the day after a truly superb race. McMillan took his third runner up slot of the afternoon ahead of McFall.

The ProStocks once again fielded a huge grid which just failed to break the 30 barrier, and once again included European Champion Jazz Moore from Scotland. The action came thick and fast, with Mark McLaughlin from Coleraine taking the opener on his first appearance of the season. Davy Wright and Steven Haugh chased him home, before Ashley Hawe broke free to take a welcome victory in the second heat over Jonny Winter and Neil Hyndman.

Alister Robinson had shown some good pace during the heats, and in the feature final he got the breaks he needed to hit the front and pull clear. The others just couldn’t get on terms and he came home for a well deserved win over Haugh and Greg McMullan. The recently introduced 1300 Stock Cars rounded off the programme, and it was great to see some more newcomers including Ivan Elliott and former Saloon Stock Cars Irish Champion Richard Forsythe. Elliott was to be the star of the show, as he scorched to the win in both heats from the novice grade to earn a rise to yellow for the final. Curtis Greer and Tam Agnew chased him home in the opener, with Agnew and Ben Armstrong the placemen in heat two.

An early caution period in the final brought the field on Elliott’s tail, and the writing looked on the wall for the debutant. The bumpers were flying in amongst the placemen, and this allowed Elliott to break free once again and race home to complete his dream day with a treble. Agnew and Armstrong once again chased him over the line.

Racing continues at Tullyroan Oval this Saturday evening, June 28th (6.30pm) when the Superstox return for the second round of the lucrative NIOval TV Series. Also in action will be the Reliant Robins, Lightning Rods, ProStocks and Ninja Karts.