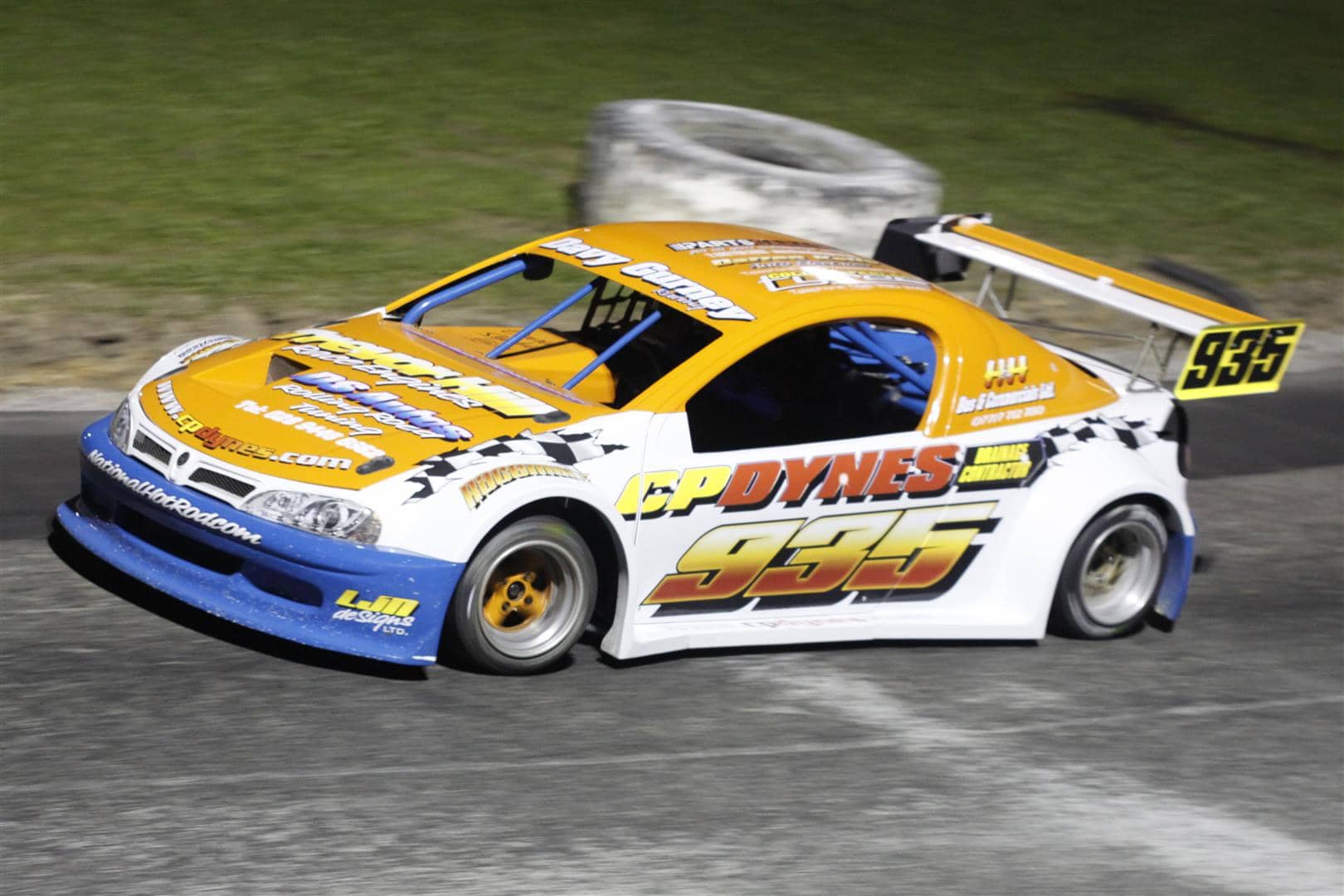 From a pleasing 17 car entry, Andrew Murray beat Gurney into second place in the other race of the evening, thwarting his hat-trick bid. It was an evening of close and frenetic racing, with other feature race final victories in the Bell Building of Portadown sponsored meeting falling to Mark Kinghan in the ProStocks, Adam McFall (Ninja Karts), long distance traveller Ian Riordan (Junior Productions) and Irish Champion Ian Bolton (Reliant Robins).

It was the eighth of fourteen World Championship qualifying rounds for the National Hot Rods, with the drivers aiming for a slot in the biggest race of the year at Ipswich in July. Gurney shared the front of the pack with Stephen McGonigle, and quickly stamped his authority to pull well clear in the night’s opening event. As Gurney swept home to a clear win, Portadown’s Andy Stewart took a pleasing second ahead of Simon Kennedy.

Recent form man Andrew Murray set off like a demon in heat two, and was quickly slicing through the field from his star grade start. Gurney was again the early pacesetter, but had no answer to Murray’s lightning pace as the Bangor man grabbed an impressive victory. Gurney held on for second this time ahead of former British Champion Stewart Doak.
Gurney again held sway at the front in the final, but his healthy lead disappeared under a caution period for the stranded car of Rab Forsythe. The resumption of battle saw Gurney hold his nerve despite pressure from behind, taking the flag in fine style ahead of former World Champion Keith Martin and Mark Heatrick.

The opening meeting of the season for the budget ProStocks formula fielded upwards of thirty cars, with a whole host of newcomers amongst the ranks.

As usual there was drama aplenty, with the experienced Conor McElmeel storming through to take the opener ahead of Strabane brothers Ryan and Dean Fleming from the star grade. Another north west driver, Jason Kee, raced to victory in heat two ahead of another newcomer in Nikki McClelland, behind the wheel of his brother Stefan’s championship winning car.

World Cup holder Ryan Abernethy showed his credentials with third spot.
The final was a blinding race, with local Tullyroan driver Mark Kinghan nipping ahead early on after relieving McClelland of the lead. Lee Wylie chased hard but just couldn’t get close enough to mount a challenge, with Abernethy again impressive in third.

The tiny terrors in the Ninja Karts again kept the fans happy with three great races which produced three different winners. The star graders shared those wins between them, with Matthew Nicholl the winner of the first heat ahead of Adam McFall and Niall Cregan.Cregan was the one to watch in heat two, sweeping through to a fine win ahead of Adam Weir and the ever improving Molly Heatrick. Joel McPeake set the early pace in the final, before losing out to Callum Magill. He looked set to land that victory which has looked very likely for a few meeting now, but just overcooked things out onto the back straight and spun out of contention. Belfast’s Shea Fegan moved ahead but got outfoxed on a late restart by McFall, who took the win by less than half a kart length at the chequers.

Edmund Davis was the star turn during the Junior Productions heats, as he took the flag in both as the teenagers raced around the oval at top speed. Ian Riordan, all the way up from County Cork, was runner up on both occasions, and it was he who led the way in the feature race final. Davis was tracking his every move until they all tripped over each other, sparking a huge crash which saw Graham Fegan up on his side before crashing heavily on turn four. Graham emerged unscathed, and with the result declared on the previous lap it was Riordan who made his long trip north worthwhile by collecting the winner’s trophy.

Jamie White was the winner on the road in the opening Reliant Robins heat, but he was later excluded from the meeting when his car was deemed to be running outside the rules. That elevated Irish Champion Ian Bolton to the win, and he then went on to add wins in both heat two and the final for good measure. Heat two saw a massive rollover for Sammy Graham, before Bolton took the final silverware ahead of Clint Murray and John Stewart.

Racing continues at Tullyroan Oval on Easter Saturday, with the headline event the Irish Open Championship for the Stock Rods. World and National Champion Chris Lattka from Scotland heads the list of visitors, alongside John McAllister and Derek Conner. Also in action will be the 2L National Bangers, 2.0 Hot Rods, ProStocks and the debut meeting for the new 1300 Stock Cars. The action then moves to the new Aghadowey Oval in Co Londonderry on Easter Monday, where the National Hot Rods top the afternoon bill.