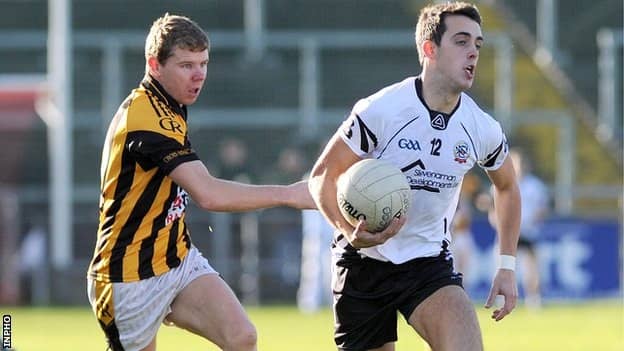 Holders Crossmaglen and Down champions Kilcoo will have to replay their Ulster Club Championship quarter-final after a thrilling draw at Pairc Esler.

After trailing for most of the match, Cross looked to have snatched victory when they went two up in extra-time.

But two long-range frees by wing half-back Darragh O’Hanlon meant the sides finished level on 1-12 to 2-9.

The replay will be at Armagh on 10 November with the winners facing Derry side Ballinderry in the semi-finals.

Crossmaglen, who have won the Ulster on a record 10 occasions, were hot favourites going into Sunday’s match but they made a sluggish start and were a goal and three points down before getting their opening score

Ryan Johnston got the Kilcoo goal, flicking the ball past Paul Hearty.

Two Tony Kernan frees and a score from play by his brother Stephen meant the Armagh side trailed by just 1-3 to 0-3 at half-time.

Tony Kernan tagged on another two frees early in the second half to reduce the deficit to a single point with Kilcoo not scoring for 27 minutes.

Paul Devlin landed three points for Kilcoo who were 1-7 to 0-6 up with just five minutes left.

Cross, though, were suddenly thrown a lifeline when Kilcoo lost possession and Kyle Carragher put Stephen Kernan in for a crucial goal.

Martin Aherne brought Cross level at 1-7 each when he pointed from a difficult angle and that was the last score in normal time.

Kilcoo slipped behind for the first time early in extra-time but big midfielder Paul Greenan beat keeper Hearty to a high ball to fist in the Down club’s second goal.

Greenan had a chance to score another goal but put the ball wide with just keeper Hearty to beat.

Kilcoo, though, did salvage a draw thanks to O’Hanlon’s late frees.

Meanwhile, Cross will be without Aaron Kernan for three months because of an Achilles injury but boss Joe Kernan expects Aaron Cunningham to be fit for the replay.