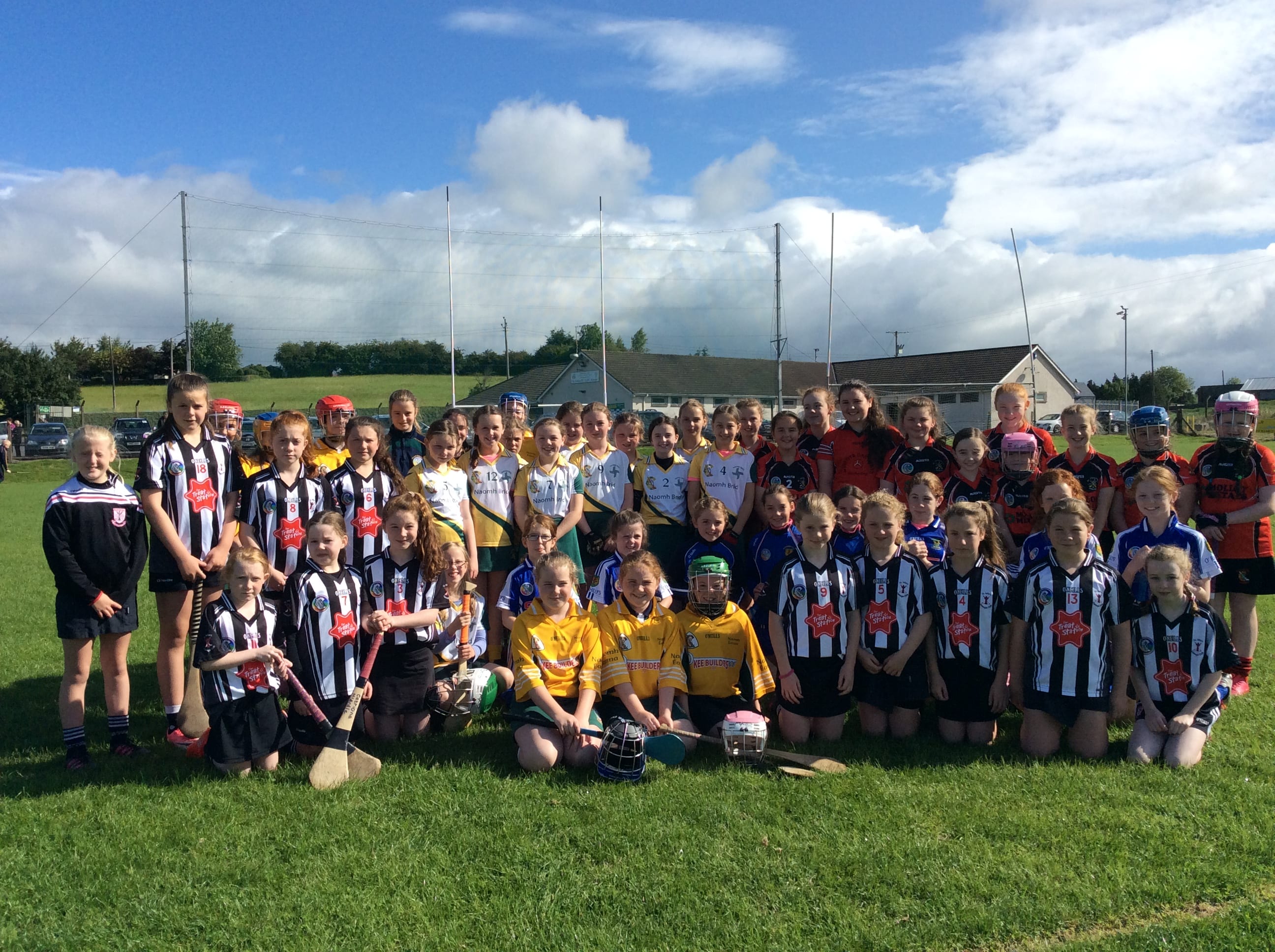 The teams who competed in the 2017 Yellow Ford Challenge.

Naomh Colmcille, An Ghráinseach GFC were once again the hosts for a keenly contested Yellow Ford Challenge Camogie Tournament which took place last Saturday in the townland of Tullygoonigan outside Armagh City.

This highly regarded tournament has now been running for seven years and it is held annually to preserve the memory of the historically significant events which took place in this part of the Armagh countryside almost 420 years ago during the Battle of the Yellow Ford.

In previous years, Naomh Bríd from Armagh and Ó Raghallaighs from Collegeland have been the sole contenders for the prestigious Yellow Ford Trophy. However, this year, due a keen interest among other clubs in the area, the organisers opened up the tournament and a number of junior teams competed on the day.

U12 teams from Middletown, Madden, Collegeland, Derrymacash and St Brigids exhibited a virtuoso display of skill, talent and gritty determination for a large crowd of spectators. Every team was given an opportunity to play each other, with the top two eventually playing off in the grand final.

The competition itself was of a very high standard, as one would expect from teams in the camogie heartland of County Armagh. There was very little to separate the competing teams with fantastic scores being taken at both ends of the pitch.

Every girl played their hearts out on the day and pride in their club jerseys was clear to be seen, with a few star performances from Caoimhe Hart and Jessica Donnelly from St Brigids, Rosie Gallagher and Cara Mulholland from Derrymacash, Kerrie Morgan and Alana O Donnell from Madden, and Natasha Mc Clatchey and Niamh Mc Kenna from Middletown.

The final was contested by Middletown and Madden and while Middletown’s strength in depth proved too much for the Madden girls in the end, some fine pieces of play kept the spectators engrossed throughout.

After much rejoicing among the winning team, the much sought after ‘Corn an Átha Bhuí’ was presented to the Middletown captain by Armagh County representative Alana McCreesh before the presentation of medals to the winning players and runners up.

The final presentation of the day was to the Player of the Tournament and with such great skill on show from so many players there was considerable debate among the judges about the most worthy recipient. In the end, however, the well-deserved ‘Laoch na hImeartha’ was awarded to Mary Loughran from Middletown.

Addressing the large numbers in attendance for the presentation, Gearóid Ó Machail, Director of Cultúrlann Aonach Mhacha, thanked all the players who took part in the increasingly popular Yellow Ford Challenge and to Ulster Council representative and tournament organiser Julie O Neill for her excellent work in coordinating the entire tournament. He also paid thanks to the hosts CLG Naomh Colmcille An Ghráinseach and to CAIRDE Teo for sponsoring the refreshments and medals after the tournament.

Alana McCreesh and Julie O Neill also addressed the young players who had done their clubs so proud on a very significant day, before thanking everyone who had helped out, especially Emer Rooney and Lilly Clifford from St Brigids for their refereeing expertise.

So a new name will be engraved on the Corn an Átha Bhuí for 2017, but for how long? Don’t miss this great opportunity next year, and remember to register your team’s interest early with the Tournament organisers.