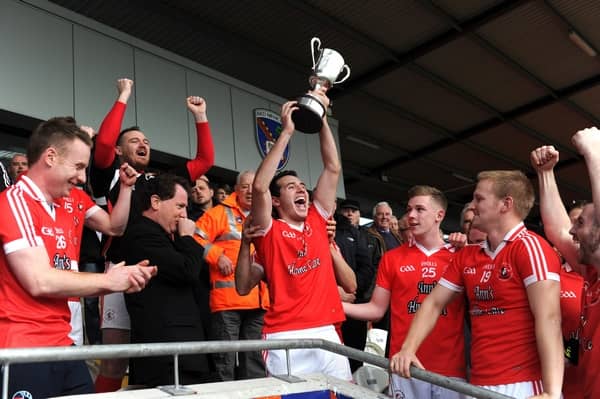 The Junior Football Championship got underway earlier in the week when Crossmaglen II defeated Killeavy II by nine points in the preliminary round tie.  Each of the first round games will be taking place this week, and ArmaghI have been looking into the upcoming fixtures and each team’s chance of carrying the Sean Quinn Perpetual Cup back home this year.

Clann Eireann have been fairly inconsistent this year, they showed glimpses of their potential in the early stages of their League campaign but their form dropped dramatically the further the season went on.  Keady on the other hand have found form just at the right time, they made a stuttering start to their season but hit a fine spell of form since the beginning of June.  They defeated Dorsey by seven, had two storming victories over Pearse Og II and just last week they give Corrinshego their heaviest defeat of the season when the game finished 4-19 to 0-02 in Keady’s favour.  Keady should ease their way into the Quarter Finals, and many believe they could progress a lot further with some tipping them to win the tournament.

These two teams last met a number of weeks ago in Armagh and Corrinshego came out on top, but they had to fight hard for that victory because Pearse Og II had been leading by 12 points at half time.  Corrinshego’s fitness proved to be a pivotal factor in that match but the city side will surely be training a lot harder for this one. While many people will be writing them off because of their league position, all you have to do is compare their early season results with those of the past few weeks and you’ll see just how much this team has improved.  Corrinshego can be a fairly unpredictable team but on their day they will fear no side in this championship.  This is a fairly young and energetic side who were still competing for promotion to the intermediate league just over a week ago, but they will need to be at their very best to defeat the Ogs.

Collegeland are the bookies second favourites to lift the cup this year due to their ruthless form in Division 3A.  They have won twelve out of their fifteen games and are the league’s highest scorers averaging almost 16 points per game.  Newtown are at the opposite end of the table, sitting third from bottom with three games to go.  Most will expect Collegeland to win on Friday but Newtown could cause problems if Collegeland go into this one half heartedly, although that’s fairly unlikely to happen as this Collegeland side have had an admirable attitude all season and will be hard to stop.

Belleek will take on their local rivals Dorsey in Carrickcruppen and you can expect this one to be a heated encounter.  Dorsey will be the favourites because they have been playing at a higher level all year in Division 3A but Belleek have gained promotion from the Junior B League, and have done so in an impressive manner, they’re currently matching table toppers Tullysaran on points with one game to play and they managed to score 29 goals in 13 games.  The pace of Belleek’s forwards really does give them hope in this one, but it’s obvious they haven’t faced a defence to the same quality of Dorsey’s.  This game will give us a great idea of how good Belleek actually are and whether they could be dark horses in this year’s championship.

Dorsey are a side who have been making huge progressive steps in recent years, they have transformed from a team who were struggling at the bottom of the old Division 4 to a team that has almost secured promotion to the Intermediate League.  Dorsey players and locals are craving what would be their second Junior Championship success, with the last coming in 1964.  Dorsey feel they finally have a side with a realistic chance, and with the form they have shown this year not many can doubt that this could be their year.

This game has caused quite a stir between these communities with both hoping to get the local bragging rights after the final whistle blows.  Cullyhanna will feel fairly confident going into this match due to their recent form, they defeated their local rivals St. Michael’s by one point in Newtown earlier in July and in their previous game they really caused quite a shock by beating Crossmaglen II by six points.

After taking a quick glance at both teams League positions it would be excusable to think Cullyhanna would have too much quality for Clady, but the latter’s league position is an unfair reflection of their actual ability.  They made a poor start to the season earning just three points in their opening eight games, but after a few managerial changes and new found hunger from the players Clady have shown a great improvement in the second half of the season.  They were impressive in their victory against Killeavy II who were still competing for the title at the time, and their only two blips came against the promoted sides.  Cullyhanna may be the deserved favourites in this contest but Clady certainly won’t go down without a fight.

This shouldn’t be much of a contest.  Killean have certainly seen better times in recent years, they have finished this season at the foot of Division 3B, although in their defence they have been hit hard with injuries and players travelling this year.  It’s never nice to see a club struggle, but the only real goal for Killean in this fixture would be to compete with Tullysaran as closely as they possibly can and use this match as an opportunity to give some of their younger players some much needed experience.  Killean have got a lot of talented young footballers, and these players may develop into a strong side in the future, this game could be used as a stepping stone towards that goal.

This will be another tough one to call as there isn’t too much separating these two in the league, in both of their meetings the home side has come out on top. Dromintee defeated O’Hanlons by three points at home and O’Hanlons came out on top by two in Poyntzpass just a fortnight ago.  There are certainly no strong favourites, both teams should be entering the game with a positive and hopeful attitude, but it’s hard to see either of these teams progress much further after this round.

Cross’ II are eager to get the Sean Quinn Cup back into their hands, it has now been 12 years since Cross last lifted the Junior Championship and they feel this is simply too long to be waiting for a second success.  Ballyhegan have had a tough year and are fighting it out to avoid relegation to the Junior B league with two games to go.  But if they secure a win in one of these two games there is a strong chance they could stay up, and if they were to cause a surprise against Cross they might just end this year on a high note.  It would be a mistake to overlook Ballyhegan before they take to the field because they caused Crossmaglen bother this year already when they managed to get a draw at home and they were brilliant against Corrinshego last week, beating them by six points.  Crossmaglen may be the stronger side and may be extremely determined, but out of all the first round ties this one has the biggest chance of producing a shock result.

This year’s Junior Championship certainly is a hard one to call, and that’s due to the number of talented teams challenging for it.  Just five years ago, two teams that are playing in this year’s Junior were competing in the Intermediate final, there are only five points separating Keady who are sitting third place of the Junior A League table and Ballyhegan who are sitting second from bottom.  It’s these facts and statistics that have got a lot of people talking about Junior football in Armagh.  Paddy Savage, who is a commentator for Armagh TV and a man with a great knowledge of football in the county, agrees that Junior football is currently being played at an impressive level. “When you consider that the 2013 Junior final took place between a side which had already secured senior football for the following year in Annaghmore and their neighbours Clonmore who had finished midway up Division 2, then the current structure provides a much more level playing field for the teams in the Junior League to compete”.

“The cliche that league form goes out the window in the championship will no doubt prove to be true on one or two occasions and I hope to see a lot of close and hard fought matches”.

Paddy will be covering a number of matches in the latter stages of the competition for Armagh TV and he has tipped Dorsey to take the cup back to south Armagh this year.

“Dorsey would be my picks for the Junior Championship. They endured a difficult time in the Intermediate League in 2013 but have recovered very well and are in flying form this year”.

“Dorsey have benefitted from the addition of one or two important players this season and with promotion looking likely, no doubt they will be very focused on trying to win their club’s first championship”.

“League form suggests that Collegeland will also be strong contenders while Keady have a huge reputation in Armagh football and will be hoping to win the Junior Championship at the first attempt”.

Boylesports have also been speaking to ArmaghI and they have got quite a different view on this year’s favourites, they have placed Keady at the top of their list with Collegeland sitting marginally behind them, and have interestingly given Dorsey an 11/2 chance.  You can see Boylesports full list of odds below.