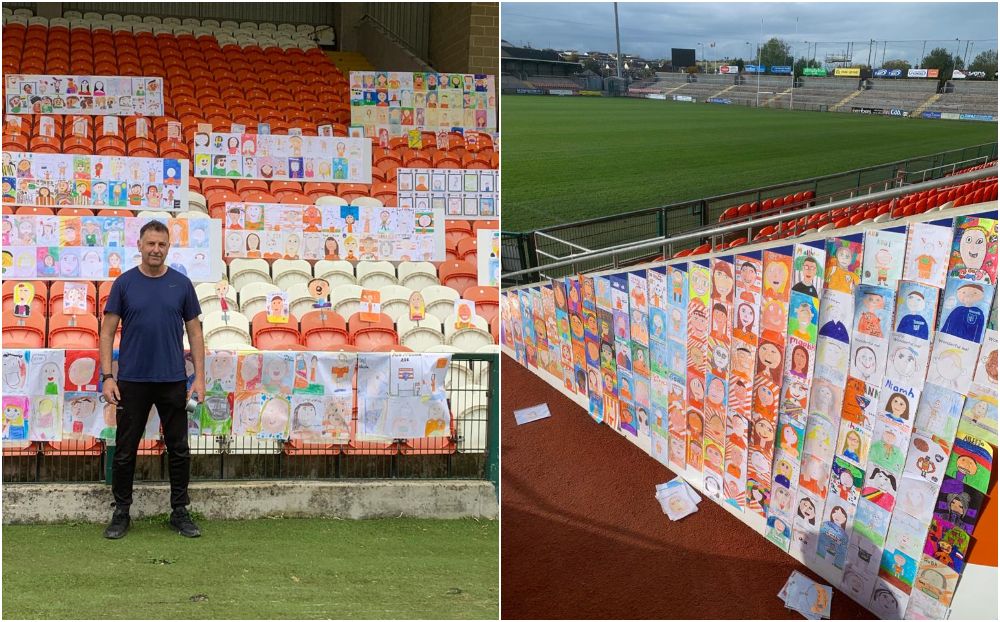 It’s been a waiting game and a frustrating year for sport with yet again almost everything put on hold.

The Orchard County Senior Footballers had been chomping at the bit to resume their Allianz National League.

The fans couldn’t wait either for the last two games against Roscommon and Clare – the former at home – with a win almost guaranteeing promotion to Division 1.

It was a disappointing defeat for Armagh on Saturday but while it could have been even more bleak, as there were no supporters allowed – there was a feeling of hope and optimism at the Athletic Grounds.

Every sound echoed around the empty stadium with only essential staff and media present and socially distanced. The air was chilly, but the seats were warmed by over 3,000 Armagh school children’s smiling faces.

Those faces took the form of self-portraits by primary school children throughout Armagh, in support of their team, their county and most of all as a message of hope for everyone watching on the national airwaves.

The initiative was instigated by Armagh Performance Coach Hugh Campbell and for this episode of The I on the Ball, proudly sponsored by Blackhill Energy, we spoke to Hugh about the idea behind the campaign, how it came about and the message it sends.

They’ve been left in limbo, awaiting the outcome of relegation appeals from other clubs after last year’s truncated season.

The NIFL Premier Intermediate League finally got the go-ahead with the fixture schedule imminent when the latest restrictions were announced last week and as Intermediate football is not considered ‘Elite,’ all activity has stopped again.

There has been plenty of activity at the club however, and we caught up with Armagh City FC Chairman Aidan Murray, who spoke about their new signings, their perfect record in their cup fixtures thus far, and the focus of the club, as they comply with the latest instructions from the powers that be.