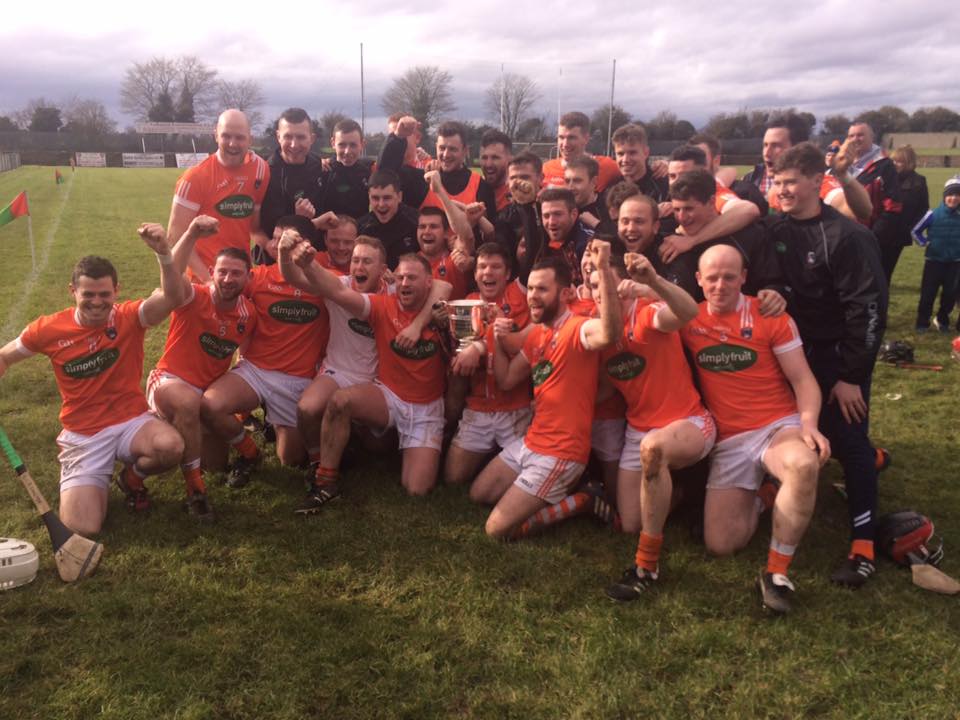 Armagh hurlers claimed an historic national league title on Saturday afternoon, which earned them promotion to the Allianz Hurling League Division 2A for 2017, after a deserved victory over fierce rivals, Down. The game, which was played in Dowdallshill in Dundalk, a venue which was a very surprising choice for such a significant national GAA final, proved to be a tight and exciting affair in spite of the very heavy underfoot conditions.

Down went into an early lead with four scores coming from full forward Danny Toner, but scores from Declan Coulter and Ryan Gaffney with two pulled it back to a one point game. Points were traded with Ryan Gaffney from play after David Carvill won well in the middle of the field and Scott Nicholson on the Down side. Gaffney then converted from a tight angle and drew the sides level after great work from Kieran McKernan won the ball back for the Orchardmen. Armagh hit the front for the first time with a further free from Gaffney but Down’s James McGrath hit two quick consecutive scores to edge the Down men ahead. Armagh then pushed on for the remainder of the half with scores from Conor Corvan, two long-range efforts from Stephen Renaghan, two converted frees from Ryan Gaffney and a fantastic effort from Nathan Curry. The second half was barely underway when Armagh had a chance to pull further ahead, but a penalty from Declan Coulter was well saved by Stephen Keith in the Down goal and Cahal Carvill kicked wide. Spurred on by the penalty save, Down added two scores from Danny Toner and Rian Branagan, but Gaffney kept the five point margin with two further scores from the dead ball. Ten minutes into the half, Down raised the game’s only green flag with Chris Egan finishing a scrappy-looking goal, after Artie McGuinness had managed to stop a shot on the line. Armagh responded well to the setback and with Cahal Carvill charging through on goal, he was upended and the accurate Ryan Gaffney added to his impressive tally. Down went on the attack again and Scott Nicholson’s effort finished over the bar following a spectacular save from Simon Doherty, but Declan Coulter quickly regained the three point margin. The sides traded scores with Toner and Coulter and then Conor O’Prey and John Corvan and Armagh led by three with less than ten minutes to go. Coulter went on to add another brilliant score, his third in ten minutes, and O’Prey tagged one back for Down from a free. Ryan Gaffney added Armagh’s twentieth point on the 70 minutes to put Armagh four ahead and as seconds ticked away in time added on, Danny Toner and Conor O’Prey scores left the Ardsmen two points short at the final whistle.

The final whistle saw scenes of jubilation as Armagh celebrated a rare and historic league title. Players and management were joined on the field by the boisterous Armagh support as Cahal Carvill accepted the Division 2B trophy from Ulster GAA president, Michael Hasson. Armagh hurlers will now turn their attention to the Nicky Rackard championship, which begins for them with a home game against Donegal in the Athletic Grounds on Saturday 23 April.