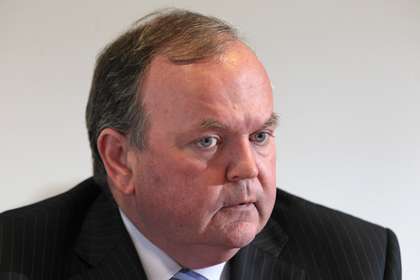 GAA President Liam O’Neill has reacted strongly to Paul Grimley’s suggestion that he and Director General Paraic Duffy played a part in the decision to suspend three Armagh players.

Armagh trio Kieran Toner, Andy Mallon and Brendan Donaghy  were all suspended for one match following a pre-game brawl against Cavan in the first round of the Ulster Championship at the Athletic Grounds.

Cavan duo Martin Dunne and Feargal Flanagan were also suspended and both County Boards were fined €5000.

Armagh were unsuccessful in their appeals which Grimley was less than happy about. He claimed that both O’Neill and Duffy had influenced disciplinary chiefs before impose a media ban on his players.

O’Neill, as reported by Setanta Sports, said : “He made an accusation, I’m not sure why he did. You’d need to ask him why he said that, but I certainly had no influence whatsoever. I wasn’t happy with what he said.

“Paraic and I have no hand, act or part in discipline, the appointment of referees or match officiating of any sort. I don’t mind putting on record that I have never spoken to the CCCC on any discipline matter since I became president.

“I made the decision when I became president that we appoint people to do those jobs – I do my job and they do theirs. It would be wrong of either Paraic of I to do that and it just doesn’t arise. There is no mechanism by which we can talk to them,” he is quoted as saying in the Irish Independent.”