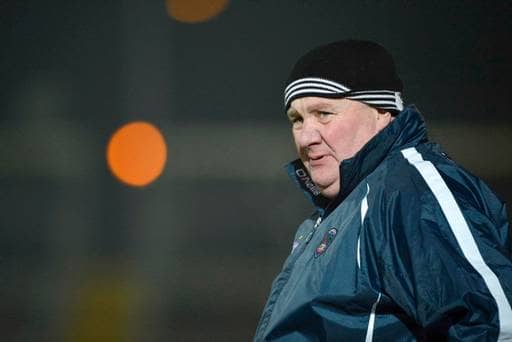 Armagh 2-15 Down 1-17: New beginnings, new rules. New men on the sideline, such as Kieran McGeeney. New Armagh jerseys with the sponsor on the back as well as on the front.

But no black card.

In the 60th minute as Armagh made their way to goal, Brian Mallon was carrying strongly and Niall McConville was making a wide run in support. His marker, Down corner-back Owen Costello, obstructed his path or else got into a tangle.

Either way, it was a moment when we thought we might see the first black card. Referee Martin Higgins spotted the infringement and gave a free, but kept the cards in his pocket.

“We were coming here tonight with the hope that it would be produced,” said Down manager James McCartan after the game.

“We are still trying to learn and see what exactly is involved and what is a black card and what isn’t. It was one of the reasons we entered into this competition.”

He continued, “If the referee deemed there were no black cards here tonight then that’s fine. But if he wasn’t giving them out because it is December … It’s one of the reasons we are involved in this tournament to see how it goes so I suppose they might send out an SOS to the referees to encourage them.

“If it’s deemed a black card then let’s see them surely. Let’s just not surprise us on the first week in February, everybody going out that day and taken aback by what is going on. I am not in any way criticising the referee by the way. I am just trying to encourage them that going forward, if they deem something a black card let’s see them.”

Down might be disappointed if they are looking too many case studies of the black card in the O’Fiaich Cup. Jumbled team line-ups and a lack of real bite to these games mean that black cards could be thin on the ground.

Armagh manager Paul Grimley largely avoided any debate on the black card, but enthused, “I think that we have been back training for three weeks and the attitude of the boys has been fantastic. There was some nice play and we are delighted with both the team performance and individual performances.”

Given the experimental nature of the teams, it was noticeable how each side could put together runs of four and five points without replay, Down and Armagh swaying all the way with one team grabbing the momentum, only for the other to suddenly rear up and produce a scoring spurt.

fter strengthening their attack with the introduction of Niall Madine at half-time, Down rattled off five points in the opening five minutes of the second half to go four points clear.

Armagh steadied themselves with points from Oisín McÍomhair and the lively Ciaran Rafferty, before a ball from Phelim O’Neill was collected by Kyle Carragher, before rapidly switched to the oncoming MacÍomhair who slotted to the net with a neat finish to take the lead.

Each team would run the maximum permitted changes thereafter and get a run of scores each, but in the end it was to be Armagh that closed the game out by a point against their oldest foes.