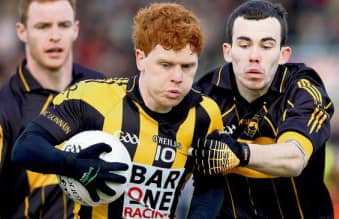 THE spark that Oisín McConville felt was missing from Crossmaglen’s challenge this autumn was ignited in the Athletic Grounds yesterday.

The All-Ireland club champions were not always convincing during the defence of their Armagh title, but November is the month they peak for and they were utterly impressive beating 14-man St Eunan’s in this Ulster club quarter-final tie. For once, Jamie Clarke was not the scorer-in-chief.

In fact, the club’s star forward didn’t score at all and it was Kyle Carragher, Aaron Kernan and late substitute Paul Grant who provided the goals.

Joint-manager Tony McEntee still wasn’t totally happy with the performance, with their old nemesis Errigal Ciaran – a team they have never beaten – waiting in the Ulster semi-final this Sunday. “We still haven’t played great football but we’re getting there,” he said. The game was a bit closer than the scoreline suggests, with the Letterkenny side giving Cross as good as they got.

Cross seized the initiative early on with a sixth minute goal from Carragher, but Eunan’s responded with three unanswered points to draw level at 1-1 to 0-4 after 13 minutes.

The Donegal side came into the game with great momentum having won six games in six weeks. Conal Dunne, Rory Kavanagh and Ross Wherrity were impressive compared to Cross, who seemed a little rusty having waited four weeks since their county final.

St Eunan’s got a goal five minutes into the second-half when a long ball was won in the air by John Haran who buried it into the net. It was an underused tactic by the visitors, and Cross’ superior strength, eagerness to press the ball further up the field and sweeping passages of play were way too much for St Eunan’s. Paul Grant’s last minute goal, after a defence-splitting pass from Carragher, put the gloss on an encouraging afternoon for the champions.