Clady GFC hoping to dance their way to success 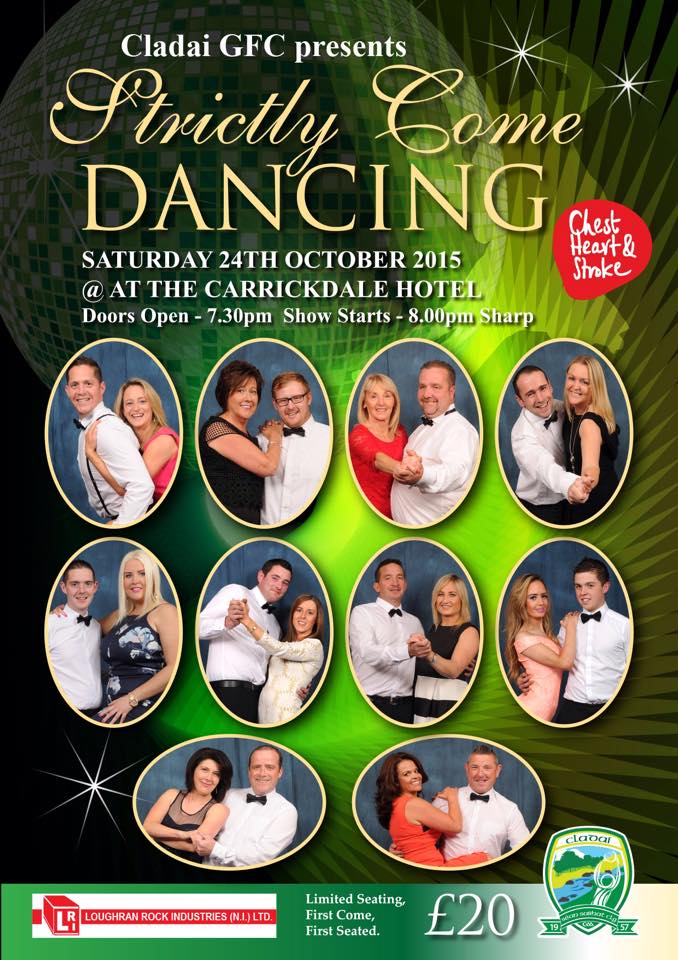 Clady GFC will be staging a Strictly Come Dancing event in the Carrickdale Hotel on Friday 13 November with doors opening at 8:00pm.

This has been a very positive year for the Junior side who gained promotion from the bottom division and they will be hoping to build on that by holding the biggest fundraising event their 58 year history.

Many local favourites will be taking to the stage and each performance will be judged by a very strict panel. We can’t disclose their identities just yet, but we can reveal there will be two politicians, a former Donegal GAA assistant manager and an Armagh Ladies GAA star dishing out the score cards.

Club Chairman Michael Savage explained that all the monies raised on Saturday will be going towards the development of the clubs playing facilities and the Northern Ireland Chest, Heart and Stroke Foundation.

“An important part of the development of any player and team, is having the right facilities to promote and nurture that development. This is something that we, as any club in the County, strive to provide for our underage and senior teams in an effort to ensure their safe and successful development.

“That’s why we’re currently embarking on a new development programme, work on which we aim to begin towards the end of next year. Our existing football pitch is currently in a poor state of repair, and not suffice to adequately cater for the ever increasing number of teams and games that the club supports.

“Of course all development comes at a cost and in this instance we estimate this to be over £400,000 but the final figure will depend obviously on estimates received at tender stage. We have already passed all stages of the SIF (Social Investment Fund) grant process and are awaiting approval from the Office of the First Minister and Deputy First Minister.

“A lot of effort has went into this event, the commitment of each member of the Strictly committee, the dancers and all other helpers has been quite surreal. These people really do deserve a successful night for the effort they have put in.”

Not since the club redeveloped of their playing facilities in 1988, has such an ambitious project been undertaken by Clady.

The redevelopment in 1988 heralded a period of prolonged success for the club winning a Junior Championship in 1992 and successive promotions Leagues. We certainly hope this fun-filled event helps trigger a similar period for Sheáin Sabhat’s.