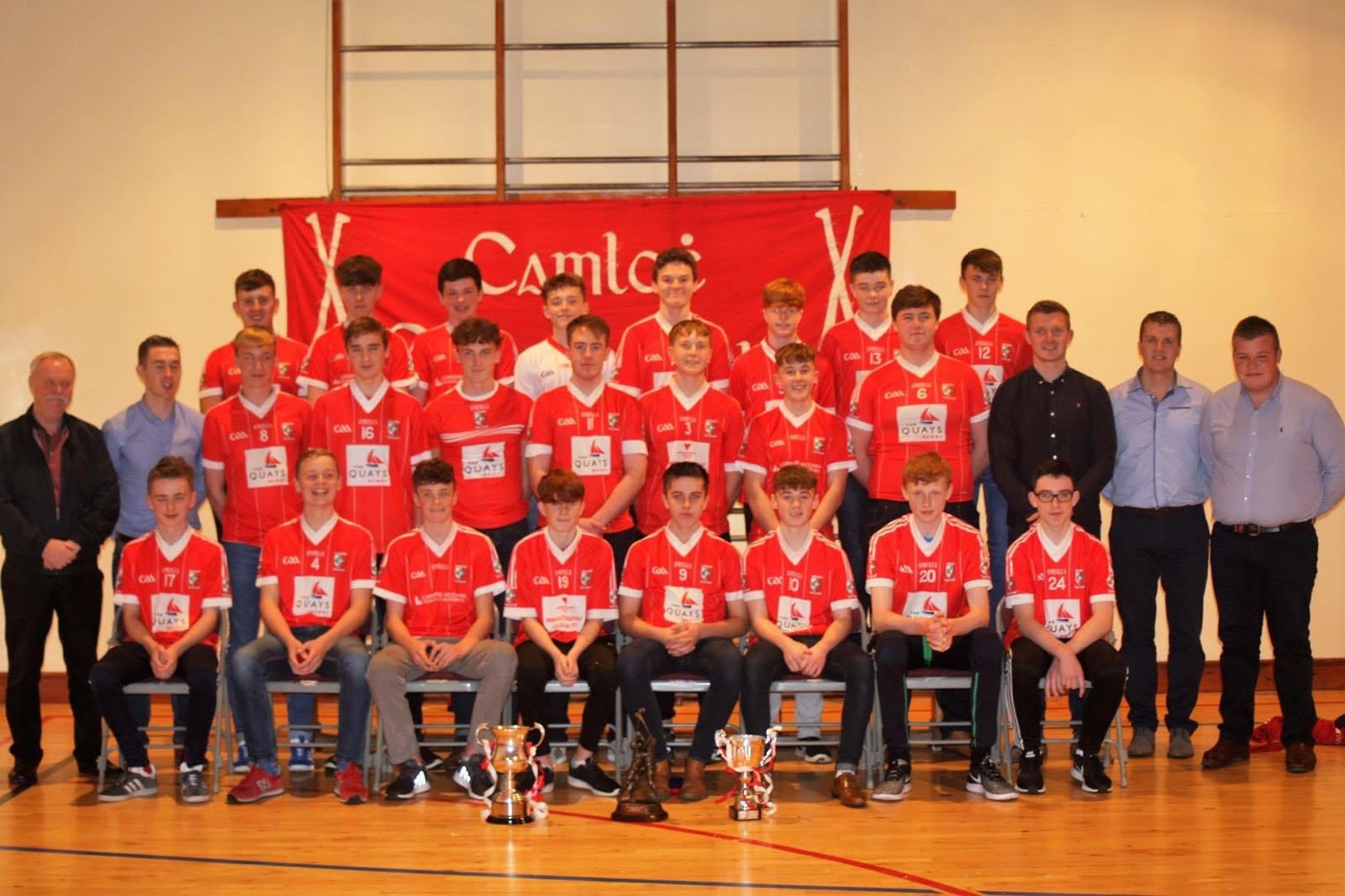 Members of Craobh Rua Camlocha Hurling Club came together recently at St Paul’s High School, Bessbrook, to celebrate what was an historic year for the club.

Joining them as guests on the night were Seán McAlinden, Armagh County Board representative and none other than Joe Canning, the Captain of the 2017 All Ireland Winning Galway Hurling team.

Joe was present at the request of the Quinn family to offer support to all in the club after the passing of their son Patrick, who was a keen hurler and member of the club’s Under 16 squad.

Craobh Rua committee member Pat Mc Ginn acted as host on the night and he began by inviting Club Chairperson Raymond Watters to say a few words of welcome to the players, parents and the schools.

The Craobh Rua secretary Labhrás Bradley then provided a quick summary of this year’s coaching section of the club’s Annual Report and in so doing acknowledged the contribution of club coaches and local schools to the continued success of the club.

He outlined how the club has developed in relation to the increased numbers now participating at each age group, its strengthened delivery structures and the improved knowledge of hurling at all levels within the club.

The presentation of medals was next on the agenda as each age group from U8s to U14s were invited up to the stage to receive their medals, which were presented by County Board representative Seán McAlinden.

The Richard Hughes Memorial shield was presented by Club Chairman Raymond Watters to Under 10 player Ben O’Hare for the hard work and dedication he has demonstrated throughout the year.

Seán McAlinden congratulated all involved in underage development in the club and said that it was impressive to look down the hall and see it filled with young people, their parents and their coaches. He spoke of the sheer delight he had witnessed in the Athletic Grounds on the night the U16s won the Championship after what was a highly competitive and skilful game of hurling.

The Club’s Pat Mc Ginn then reflected on the contributions of previous generations of hurling people from this area and said that the efforts of this year’s Under 16s had added another colourful chapter to that illustrious history.

He then invited Club Chairperson Raymond Watters to introduce Joe Canning, surprise guest for the night. Joe Canning said he was honoured and privileged to be invited to Craobh Rua’s presentation. He told the young players to play as many sports as they wanted, to enjoy learning new skills while they continued to improve on their existing skills.

He reflected on the level of commitment and dedication all on the team had demonstrated over the past year. A presentation was then made by U16 players Tiarnach Lewis and Tiarnán O’Hare on behalf of the club to Joe Canning of a lovely picture painted by local artist Shona Malone.

A new cup called the Patrick Quinn cup was then awarded to Fearghal Cooney, for his dedication and his commitment to the U16 team throughout the entire year. This was the first year of the Patrick Quinn Cup which was kindly donated by Patrick’s parents Mary and Gerard Quinn.

Pat Mc Ginn then drew proceedings to a close by thanking all those who attended, especially guests Joe Canning and Seán McAlinden. All teams were then invited into the gymnasium for team photographs while refreshments were served in the main hall.

This was one of the most enjoyable nights in recent club history, and a big thank you goes to everyone who helped in any way, especially Principal Jarlath Burns and the staff of St Paul’s High School for their help and for the use of the school facilities.