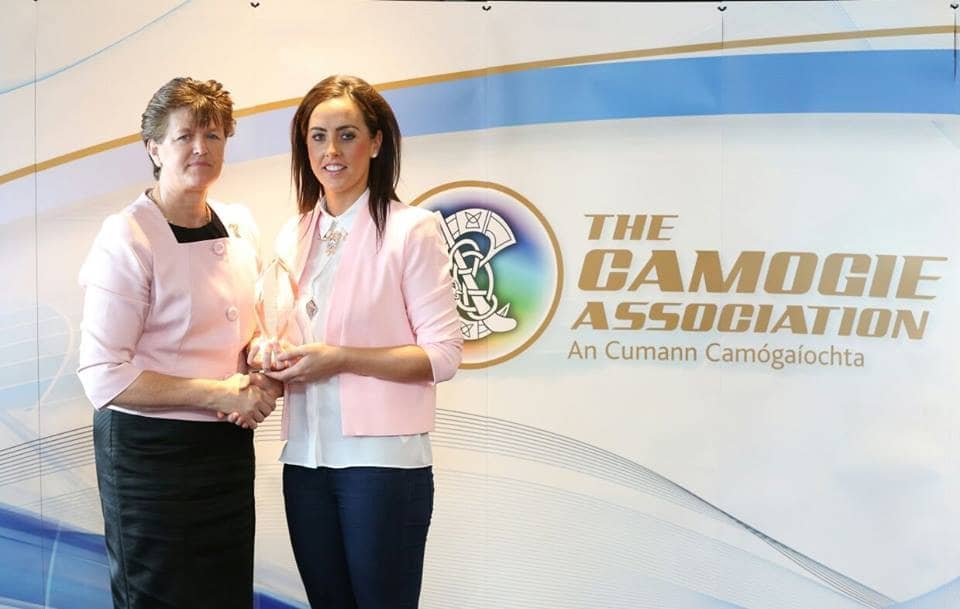 Winter evenings in the world of Gaelic games are generally accompanied by a circuit of end of season award ceremonies, each inevitably culminating in the coveted prize of player of the season.

It is seldom that achievements across a span of many years recognised however in 2013, the Camogie Association of Ireland set out to rectify this by launching its “County Players of the Decade” initiative.

This scheme represented a key part of the Association’s 110th anniversary celebrations. With the greatest players of the decade honoured as part of the centenary celebrations in 2004, this quest sought to identify the one player in each county who had demonstrated the most exceptional levels of skill, dedication, sportsmanship and commitment to camogie in the last decade.

It is a source of great pride for Cullyhanna Camogie club, and indeed the entire village and community, that when this honour was allocated within the Orchard County, it was our very own Bernie Murray who was honoured as Armagh’s Player of the Decade.

There can be little doubt such recognition is merely a fitting tribute to Bernie’s remarkable career for club and county. From her very earliest years on the camogie pitch, Bernie’s star has shone most brightly. Her commitment to camogie in Cullyhanna and Armagh has unparalleled over the years and her long list of achievements bear testament to both her ability and character.

It would be an impossible task to do justice to all her honours in a single article but to give a brief flavour of Bernie’s many achievements, it is worth noting that she has won two All Ireland Nancy Murray Cups, an Ulster senior championship and two Ulster intermediate championships with her county, as well three intermediate championships and a junior championship with her club. Amongst a host of personal awards, she received a Soaring Star award in 2010, a Purcell Cup All Star in 2006 and was player of the match in the 2010 All Ireland final.

Bernie was the captain of Armagh on that occasion and although Kildare were victors that day, Bernie was captain again in 2011 and lifted the Nancy Murray Cup after an eight point defeat of Westmeath. Nor is it only Cullyhanna and Armagh who have benefited from Bernie’s many talents over the years as she has also served Ulster and Ireland with distinction.

Croke Park during the recent All Ireland camogie finals was a most appropriate venue for Bernie to receive this award which very much places her in the pantheon of camogie greats. President of the Camogie Association Aileen Lawlor commented on the fantastic occasion stating that;

“The County Players of the Decade is one of the initiatives to mark the 110th year of the Camogie Association. We are delighted to acknowledge at a national level the achievements of these players, 24 in total, who have made an enormous contribution to camogie both at local and national level. Their skill, dedication, commitment and passion for the sport are to be commended and it is fitting that their exceptional skills were recognised and celebrated on All Ireland Camogie Finals day.”

We in Cullyhanna can only agree wholeheartedly with those sentiments and sincerely thank Bernie for the positive contribution she has made to our club. We are well aware that she acts as a tremendous role model for the youth of our locality and we wish her every success for the rest of her fabulous sporting career.