Armagh ladies battle through to final 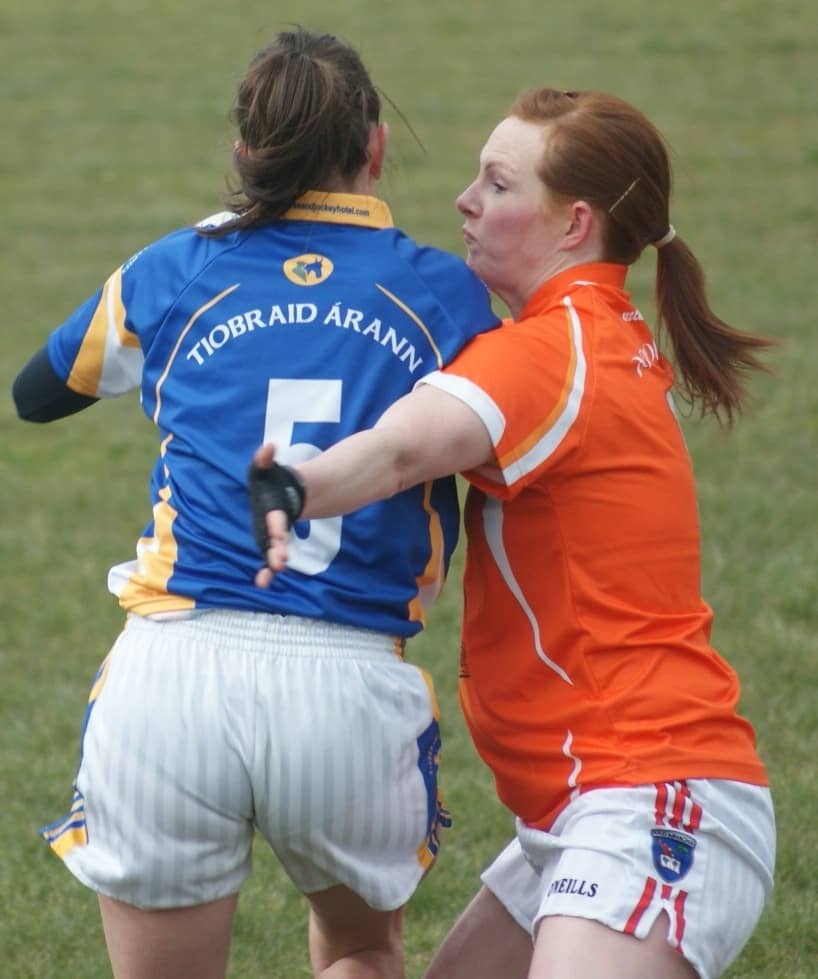 Armagh ladies are the only remaining unbeaten county team in Ireland this season after a monumental effort secured the Orchard outfit’s place in the Tesco HomeGrown National League Division Three final.

They will face nearest neighbours Down in Saturday week’s Dublin decider after the Mourne women squeezed past Longford in Clones thanks to a goal and a point in injury-time.

The All Ireland Intermediate champions showed they have hearts like lions in the course of a magnificent fightback in Mullingar against a determined Tipperary team who had been handed a three-goal head-start.

It was a performance of special character considering Armagh were without manager James Daly and his daughter Katie, the regular goal-keeper, on the day due to a close family bereavement.

Although the game went ahead at the family’s request, favourites Armagh unsurprisingly took time to find their rhythm in spite of a dream start when captain Caroline O’Hanlon hit the net in only the fifth minute.

Tipp had already kicked a wide into the wind and also struck the crossbar but O’Hanlon didn’t lack conviction at the other end as she steamed in to get on the end of a ball across goal after good approach play involving Fionnuala McKenna, Mairead Tennyson and Sinead McCleary.

However within the next seven minutes, Tipperary had netted three times themselves to bring back bad memories of Armagh’s last defeat – at the same stage of this competition a year ago when a Westmeath goal blitz settled the semi-final.

But Armagh’s maturing team showed why they are unbeaten in 16 matches with a resolute, purposeful performance against abrasive opponents in a bruising battle that at times threatened to turn nasty.

Having been tormented by her dominant display in the league game in Silverbridge a few weeks ago, Tipp knew they must stop O’Hanlon – who still top-scored – by any means available and the All Star was constantly checked, held and illegally impeded.

As well as failing to be sufficiently strict on niggling infringements, the referee didn’t take decisive action against several crude challenges on other players – which encouraged reckless conduct and led to understandably frayed tempers.

Teak-tough youngster Niamh Marley in particular shipped a few heavy hits but the man with the whistle, Joe Murray from Dublin, didn’t make use of the sin-bin at any stage and a frustrated Tennyson even picked up a tick for backchat.

Armagh had gone for a fairly conservative selection with the six most experienced players getting the nod at the back, Ballyhegan’s Danielle Morgan accommodated as an additional defender and All Ireland Intermediate wing back Niamh Henderson named at corner forward.

That meant no starting spot for Tennyson but the seasoned campaigner was reprieved when Kelly Mallon was deemed unfit to take the field and she made the most of a deserved opportunity with a goal and a point.

Precocious schoolgirl Henderson scored a hat-trick of first half points, the third calmly planted over the bar in injury-time after a superb solo run by McCleary, who was making a welcome return to the team.

Top scorer in three of Armagh’s first four fixtures this season, including from the unfamiliar role of full forward on her last outing against Wexford, McCleary was again given the No 14 jersey here though she did predictably drop deeper at times.

Carrickcruppen’s Caitlin Malone continued alongside clubmate O’Hanlon in midfield and although guilty of some ponderous play and poor option-taking in the first half, really stood up to be counted after the interval.

Likewise the increasingly assured defence were elevated from villains to heroes, with no more goals going in after the 13th minute and Tipperary restricted to a meagre return of three points in the entire second half in spite of having a very strong wind behind them.

Sisters Sarah Marley and Caoimhe Morgan along with Laura Brown snuffed out almost every threatening attack, with Sharon Reel and Niamh Marley willing carriers out of defence in support of O’Hanlon and Malone.

McKenna, particularly prominent early on, appeared restricted by a slight leg injury later in the game but the combined breaking threat of O’Hanlon, Henderson, McCleary, Tennyson and sub Shauna Grey ensured Tipp couldn’t dominate territory totally in that second half.

When the third Tipp goal, from the penalty spot, went in it already looked a long way back for the table toppers and lesser sides might have folded but, as the captain noted afterwards, there was so much time to go that Armagh didn’t need to panic – particularly as they were creating regular points-scoring opportunities and only trailed by four.

Crucially, there were no more goals against, thanks to a brilliant block at point-blank range from goalkeeper Catherine McAlinden – who had agreed to return in Katie Daly’s absence – on 21 minutes which felt like a potentially significant turning point.

At that stage the score was 1-4 to the three Tipp goals, with points from McCleary and Tennyson sandwiching a double from Henderson in the Armagh account.  But within two minutes of McAlinden’s super save her side were back in front thanks to an O’Hanlon point quickly followed by a Tennyson maximum.

Then it was Tipp’s turn to rattle off three unanswered points and although Henderson raised the white flag to level things up at the break, Armagh had the wind to face when they came out again.

But O’Hanlon drew first blood with a confident free seven minutes in shortly after McCleary had rattled the cross-bar with a fierce volley and then young Grey struck clinically with a great goal from a narrow angle on the left.

It was a goal worthy of winning a National League semi-final but Armagh were far from home and hosed yet as Tipp clawed the three points back one at a time.  But McCleary’s only free of the afternoon gave her team a crucial cushion which forced the underdogs to go for a last-gasp goal from an injury-time free rather than simply knocking it over to force extra-time.

In such a tight game, assistant manager Aiden Lennon was justified in making only one change, with the introduction of Grey – something of a supersub for Daly – looking like an inspired decision.

There was great relief when the final whistle went but, by overcoming adversity and exorcising the ghosts of last season’s semi-final loss, Armagh can take enormous encouragement from Sunday’s success.

Having to travel half the length of the country to face the team which effectively finished third was scant reward for Armagh topping the table but this stern test should stand to them not only in the promotion shoot-out with Down but for the summer’s Senior Championship campaign.