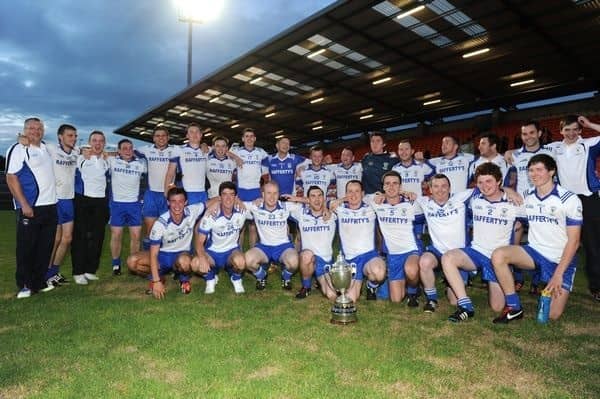 Congratulations to Harps Senior B team who last week defeated a gallant Maghery side by 1-10 to 0-06 in the T-Met Senior B Championship All County final.

The match, played in excellent conditions and sporting throughout, attracted a good local support for the encounter at the Athletic Grounds.

Harps got off to a good start bossing the game and took a two point lead through Pudesy Rafferty.

However, on the eight minute mark we were indebted to a brilliant point blank save by Philly Richards to deny Maghery a certain goal and immediately counter attacked with Liam McKenna adding a superb point to go three up.

Harps had numerous chances to extend the lead and were unlucky to see a James Willis goal bound effort come back off the post.

However Maghery came more into the game in the second quarter and soon added scores of their own to pull level.

The remainder of the half was nip and tuck, with neither side able to open up a commanding lead, although Harps managed to show their superiority and creep ahead just before the interval with a Rafferty free kick that left them leading by the bare minimum: 0-05 to 0-04.

The first ten minutes of the second half was very tight. Harps played down the hill and had the advantage of whatever breeze there was.

With scores now at a premium, it was Maghery who equalised and then took the lead.

However Harps came out of their shell and the last quarter belonged to Harps as they opened up a three point lead with some excellent scores from Taff Toal and Rafferty before Toal added to his three point tally and sprinted clear to hammer home the only goal of the game on 25 minutes and assure Harps of the title.

Particular praise must go to manager Gerard ‘Butler’ Agnew and to team captain Neil McArdle on a great victory in what was a very good overall team performance.

Hard luck also to Maghery and I’m delighted to report that their player who took unwell at the end of the match and needed medical treatment has made a full recovery.