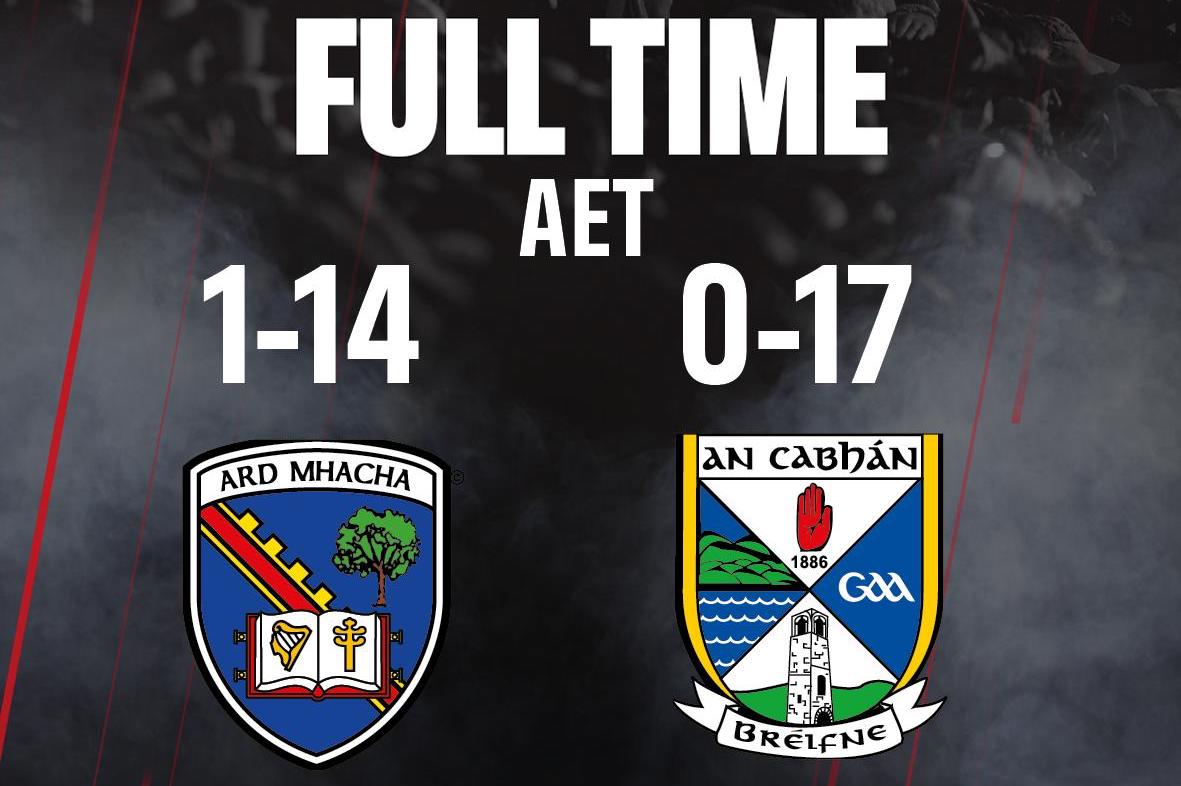 Armagh and Cavan will have it all to do next weekend after an epic Ulster semi-final encounter finished level after extra-time in Clones this afternoon (Sunday).

Armagh were on the verge of booking their place in the showpiece final later this month but once again blew a healthy four-point second-half lead.

And a risky game of keep-ball deep in extra-time backfired when Cavan tipped over an eleventh equalising score with 120 seconds left on the clock – and were unfortunate not to add another at the death.

The first half began with a clear definitive Armagh tactic – a long high ball in Rian O’Neill into the full-forward line, however, it was Cavan that opened the scoring through Gearoid McKiernan.

This titanic tussle, was tit-for-tat throughout the first half with the Orchardmen playing with a strong breeze in front of 16,716 at St Tiernach’s Park.

Five times Armagh levelled the scoring in the first half and it was all-square at the break with the sides sharing seven points apiece.

Paul Hughes gave Armagh the advantage just after the break but, as per the game to this stage, Cavan responded within a minute.

Jemar Hall added his first of the game with a jink inside from the left, but lo and behold, Cavan levelled immediately through Niall Murray’s third of the contest.

But it was the impressive Jarly Og Burns who put the cat among the pigeons with a huge Armagh goal.

Just as in the first half, he burst through from midfield and latched onto Jamie Clarke’s assist before rolling in low past the ‘keeper.

Rian O’Neill stretched that lead to four points and it was looking like a second successive Ulster win for Armagh, and a place in the final for the first time since 2008, but true to form, Armagh let that four point lead slip over the next 19 minutes.

But it looked like Clarke had won it for Armagh late on with a well-taken, if somewhat straightforward free off the ground, but Cian Mackey, the star of the show for Cavan, levelled at the death before Brendan Donaghy was shown a second yellow. Both sides were down to 14 men but given extra time rules, both teams had their full compliment returned.

With the rain pelting down in Clones, the game became ragged and loose; both sides guilty of missing a hatful of chances. Neither side were able to register a single score in the first 10 minutes of extra time.

Charlie Vernon did well to hold off Cian Mackey before finding Jamie Clarke inside who fed the marauding Campbell. And for all the world it looked like the decisive score in this gripping, thrilling Ulster tie.

Armagh opted to keep hold of the ball for the final five minutes but nerves crept – the conditions not helping matters either – and having retreated 70 metres to use Blaine Hughes, it all went a little awry.

Eventually, and almost inevitably, that tactic backfired as an error gifted Cian Mackey an opportunity from distance with two minutes to play. He made no mistake as the sides tied the game for the eleventh time.

He should have had another with seconds to play but it wasn’t to be. His three points on the day – all equalisers – were enough to give Cavan another bite at the apple in Clones next Sunday.