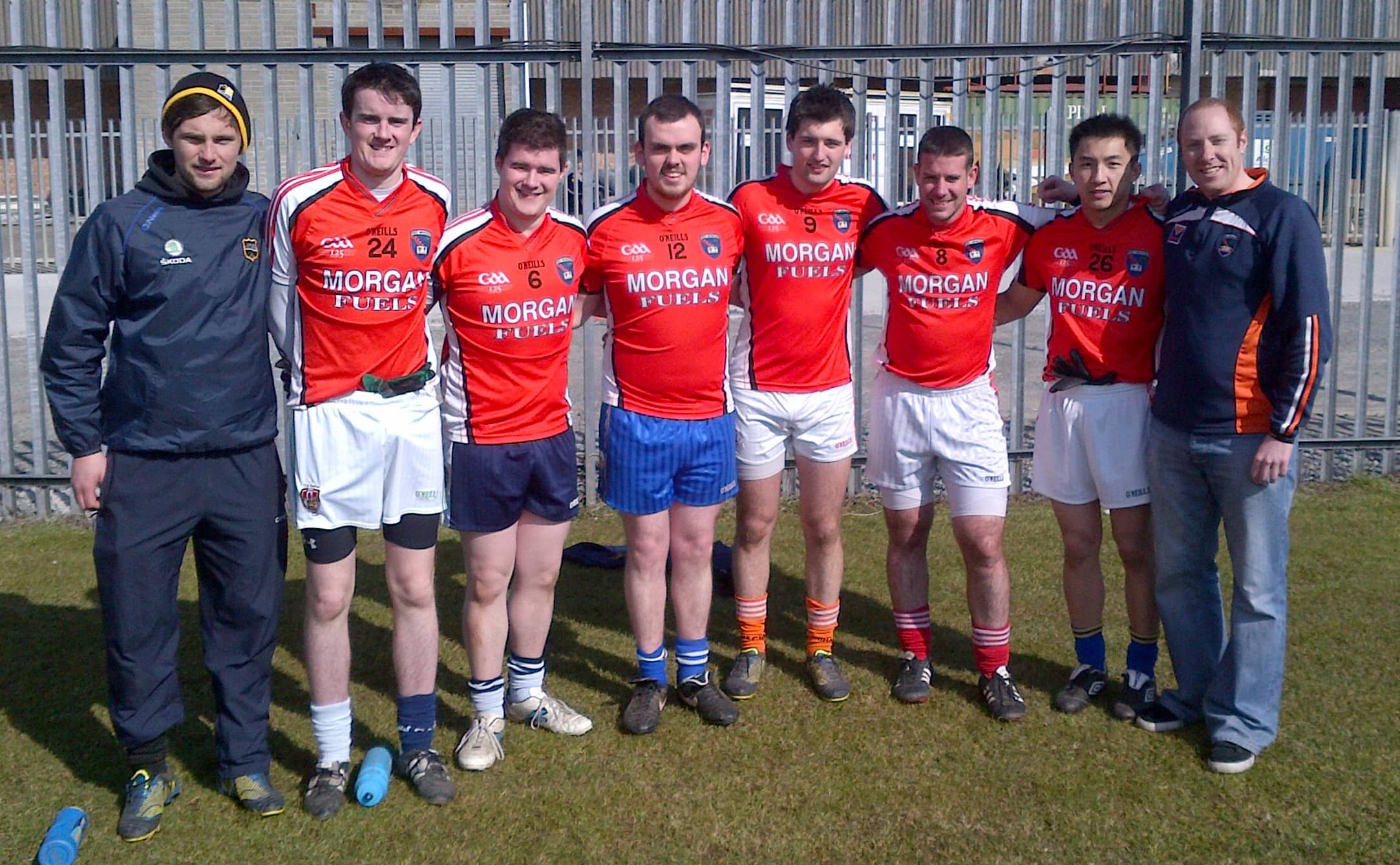 A GROUP of Irish speakers took to the football field at Páirc Esler in Newry last weekend to represent Armagh in a seven aside football competition for Gaeilgeoirí.

The players came from across the county to strengthen the link between the Irish language and the Gaelic Athletic Association. The competition was held as part of Conradh na Gaeilge’s Annual General Meeting, which was held in Newry over Friday, Saturday and Sunday. Armagh Gaels were represented by players from Annaghmore, Tullysaran, Dromintee, Newry, Silverbridge, Portadown and Lurgan. They played Na Gaeil Óga from Dublin, University of Ulster Coleraine and Laochra Loch Lao from Belfast. Na Gaeil óga is the Irish language GAA club, which was set up in the capital a couple of years ago to allow GAA players to use Irish, their first language and the first language of our country, and they have been blossoming ever since.

The same weekend, over 60 Irish speakers represented the club on the two football teams, the hurling team and the ladies’ football team in the club. Irish speakers from various clubs across Belfast play for Laochra Loch Lao and they take part in the annual Gaeltacht Football Competition alongside Na Gaeil Óga and teams from the Gaeltacht. Irish speaking students from Counties Antrim, Tyrone and Armagh played for University of Ulster and the Armagh contingent played for both teams.

As well as the male competition, an enjoyable and competitive game of ladies’ football between Dublin’s Na Gaeil Óga and Belfast’s Laochra Loch Lao was also played. Gaeil Ard Mhacha defeated Na Gaeil Óga and University of Ulster but were unable to challenge Laochra Loch Lao. Armagh was also represented in the ladies’ football with Niamh Nic Ruairí from Lurgan lining out for the Belfast side. In the end, Laochra Loch Lao proved too strong in the two codes and brought the trophies back to Béal Feirste, but the main winner on the day was undoubtedly the Irish language as not a word of English was spoke on the field.

Seán Ó Maoilsté, Irish language development officer with CAIRDE Teo in Armagh and member of Wolfe Tone and St Enda’s GAC in Derrymacash, said that everyone who took part really enjoyed the occasion.

“This was a fantastic opportunity for the players to use their Irish and I can only praise the organisers of the ArdFheis for including the competition. There are a lot of Irish speakers playing football, hurling and camogie, but it is not very often that they get to use the language, particularly on the playing field. The GAA should be a lot more proactive in providing opportunities such as this for Irish speakers.

“There is plenty of good work being carried out by individuals within the GAA, by county boards and by Croke Park’s Irish Language Committee, but it is high time that GAA authorities started to fully recognise the principles stated in the GAA constitution in relation to the preservation of our language.”

“Armagh GAA is doing a lot of work to promote our national language with articles in programmes, bilingual player profiles, signs and advertising, Irish used in Scór, money collections, awarding scholarships, Irish classes and workshops for club representatives. Many of the inter-county players have some degree of Irish, whether that be a cúpla focal or a fluent speaker, but they are extremely supportive of the language and are happy to do their bit to promote the Irish language in Armagh.”