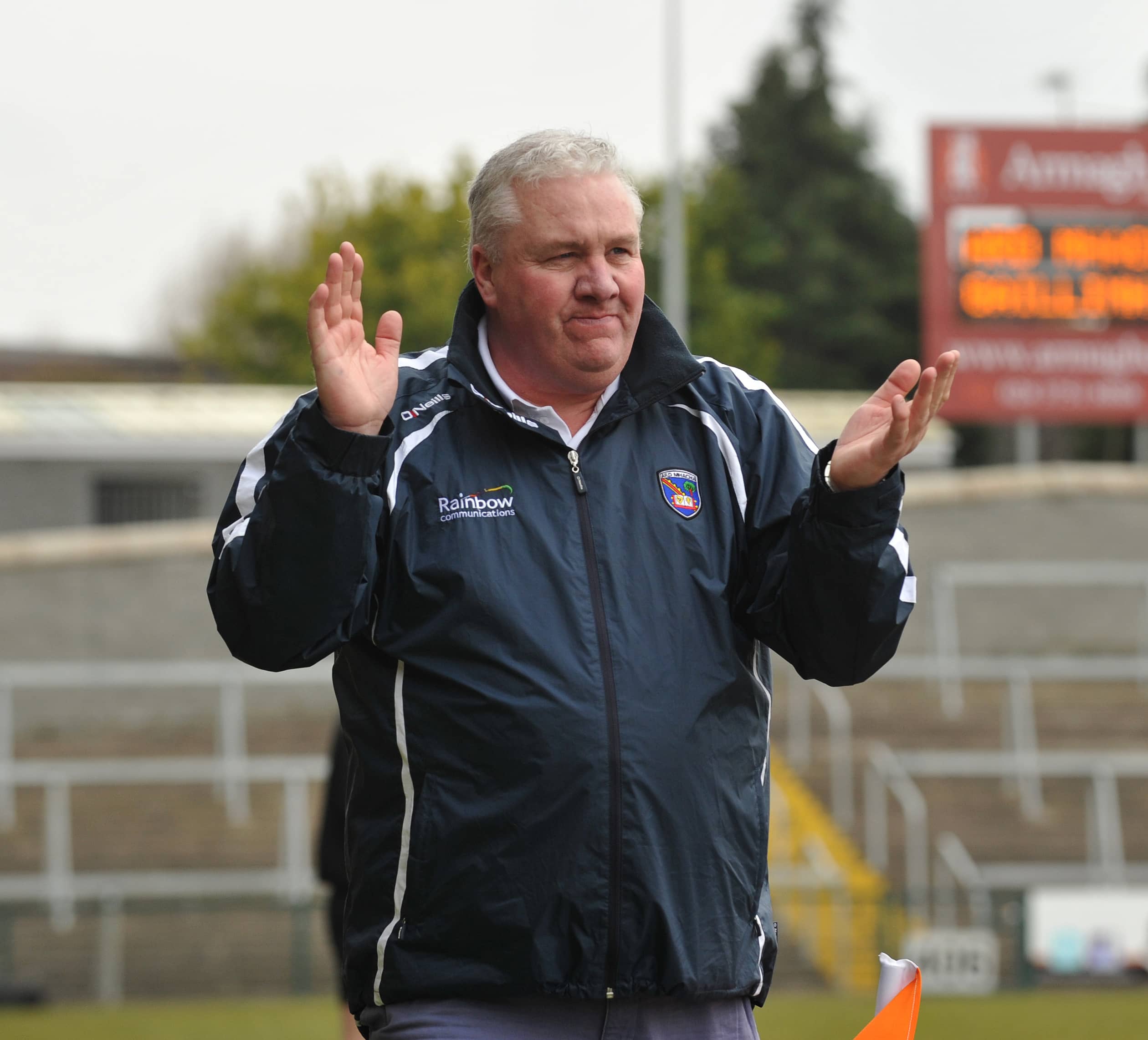 “If there was a performance I would have dreamt about last night it would have been the one we produced on the field today.” That was the emphatic summary from Armagh manager Paul Grimley of a fantastic  performance against Galway in the Athletic Grounds on Sunday afternoon.

The six-point win, coupled with Wexford’s failure to win at home to Laois, meant that Armagh preserved their Division Two status for another year.

It was looking rosy for Armagh early on as they raced into a five point lead. Kevin Dyas got the Orchrdmen off the mark thanks to some good build up play from Tony Kernan before Kernan himself added the second.

Brother Aaron then connected a third to that tally with a sweetly hit left-footed effort – Dyas this time the provider.

Stephen Harold then added another straight from the kick-out as he bombed through unopposed to fist the ball between the posts. At this stage Galway looked to have no forward options and it only got worse for the visitors as Aaron Kernan scored his second of the game thanks to a simple tap-over from close range.

However the Tribesmen did finally respond to the Armagh onslaught. A 14-metre free from the boot of Michael Meehan on 17 minutes gave Galway some hope of a fightback.

That did not last long as the impressive Dyas scored an easy point to increase the gap once again. Sean Armstrong pointed for Galway before Aaron Kernan (free) and another fisted point from Harold put six between the teams.

The game took what looked like a game-changer and certainly a sucker punch for the hosts as Galway half-forward Conor Doherty was allowed to run at the Armagh defence before a cracking left-footed shot rattled past Phillip McAvoy. This point three between them.

Stefan Forker responded with a well executed point after a dummy left his marker floored. Sean Armstrong added another for Galway but Aaron Kernan had the last say of the half as he pointed after picking up a kick-out and advancing completely uncontested to leave four in it at the break.

If Armagh has struggled this year, it’s keeping a lead. They threw away a five point lead against Westmeath within minutes of the restart and that’s exactly what happened today as Galway hit four unanswered points to level the tie and leave Armagh looking to other results.

Nontheless, Grimley’s men dug deep and Aaron Kernan soon restored that lead before Kevin Dyas scored twice in quick succession to give his side a three point advantage. Two further points from Forker (one free) widened the gap before Armstrong and substitute Danny Cummins hit back for the visitors. With 54 minutes on the clock, three points separating the sides and a strong wind in favour of Galway, this tie was certainly in the melting pot.

Once again an excellent Dyas point was followed up almost instantly by a Harold score which gave Armagh some breathing space.

Cummins, for his second of the game and Garreth Bradshaw then added another score but these would prove to be Galway’s last of the game as Stefan Forker, Caolan Rafferty, Sean Clarke and Brian Mallon sealed what was a hugely grossing and breathtaking  victory for the home side.

Not a Grim day: Armagh manager, Paul Grimley greets the final whistle with a sense of relief after retaining their NFL Division Two status with a six point win over Galway in the Athletic Grounds, Armagh on Sunday afternoon. Picture: Conor Greenan

Speaking after the game Paul Grimley knew Armagh had that sort of performance somewhere in reserve.

“It was always coming to be fair, I thought over the last number of games we have been racking up some high scores and thankfully today we burst that bubble,” said Grimley.

With Championship only around the corner in May Armagh won’t have too much time to rest on their laurels.

“We’re lucky enough I suppose in one way that we don’t have that long to wait. The boys will get a week off with club football starting next week. We then have five weeks to prepare for the Cavan game and that will be a mighty mighty challenge because they are going well at the moment.

“I watched them in the under 21s the other night and they were impressive but we will concentrate on our own game first and worry about the opposition second. If we get our game right first then it will be the other teams who will have the problems.”

STARMAN: This could have went to a number of players including midfielder Stephen Harold who got three points, or one of a Crossmaglen duo in Paul McKeown or Aaron Kernan, however it was Kevin Dyas who really set the standard with five points from play and a number of assists. One of his best performances ever in an Armagh jersey and a man that is really coming of age this season.