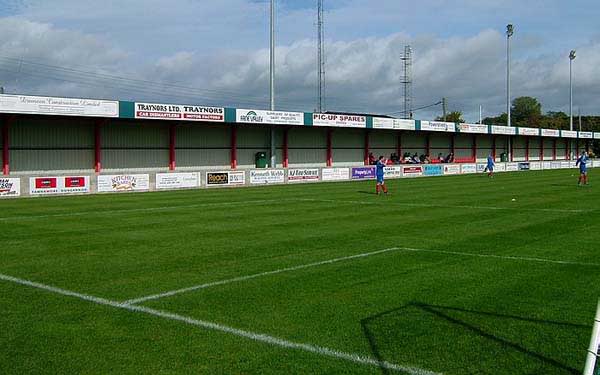 The Villagers incredibly netted three goals within the first 7 minutes with Daniel Ryan converting Mark Carson’s cross for his first goal since rejoining from Ards. Captain Steven Ferguson scored with a delightful chipped effort from 30 yards that nestled in the top corner before Carson scored at the second attempt to make it 3 – 0.

Rangers grabbed a goal back in the 37th minute as Mark Harkness controlled the ball before firing past ‘keeper William McKinstry however Loughgall quickly replied with two further goals before the break. Firstly Aaron Haire ran onto Adam Rodgers’ floated ball and slotted home for his 5th goal of the season, and then Ferguson’s perfect free-kick delivery was headed home by substitute Gerard Rooney at the back post.

Haire grabbed a second goal shortly after the interval before Rooney’s effort was cruelly deflected in past ‘keeper Michael Brown to make the scoreline 7 – 1. On 65 minutes forward Ryan set-up Carson to finish from close range for his brace.

Richard Donaghy scored another consolation goal for Killymoon with a smart finish from inside the area with 15 minutes remaining.

However there was still time for Loughgall to score two further goals as Daniel Ryan netted a fantastic individual goal as he came in from the left flank before rifling the ball inside the front post from the edge of the penalty area.  Substitute Justin Bradley rounded off the scoring with a great finish after Rooney played him in, and the day got even worse for the visitors as John Scott was dismissed for kicking out at Jude Bullard with three minutes remaining.