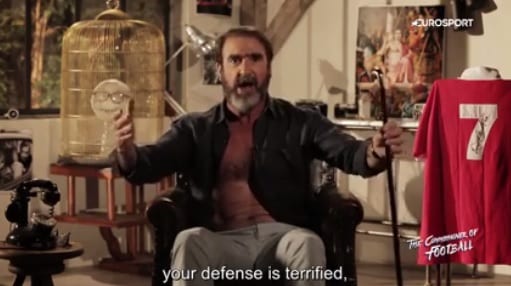 Manchester United legend Eric Cantona has praised the Irish fans and sang the now cult anthem ‘Will Grigg’s on fire’ in a promo video shot for Eurosport.

Northern Ireland play Wales in Paris today at 5pm – the first time both sides have ever made the knockout stages of the tournament.

Michael O’Neill will have to prepare his men to face the in-form Real Madrid forward Gareth Bale.

“We’ll be ready to deal with Gareth Bale,” said O’Neill. “We know his running power, his pace and his goal threat but we know how to deal with those things.

“When you get to this stage of the tournament you have to deal with special players. We need Gareth Bale to have a quiet night and it’s up to us to make sure that’s the case. We played here against the world champions and we don’t expect a tougher game than that.”

Despite not playing a single minute, Will Grigg remains on fire.

Meanwhile, the Republic of Ireland prepare for hosts France in Lyon at 2pm tomorrow afternoon and assistant manager Roy Keane has hit out at his country’s ticket allocation.

“There is genuine disappointment – not just for a silly quote – that there’s not more Irish fans getting to the game,” Keane said. “That is a genuine feeling among the whole group. It does seem unfair, for the supporters. Someone said we have three-and-a-half, four-and-a-half thousand; the capacity is 58,000 – it does seem a bit lopsided.

“You’d expect the home nation to have got an extra few, but that’s a lot more. It’s unfair, particularly the way the Irish fans have travelled and what they’ve brought to the tournament. I was thinking we’d have maybe 15,000 or 20,000 in the stadium, but we can’t change it.”