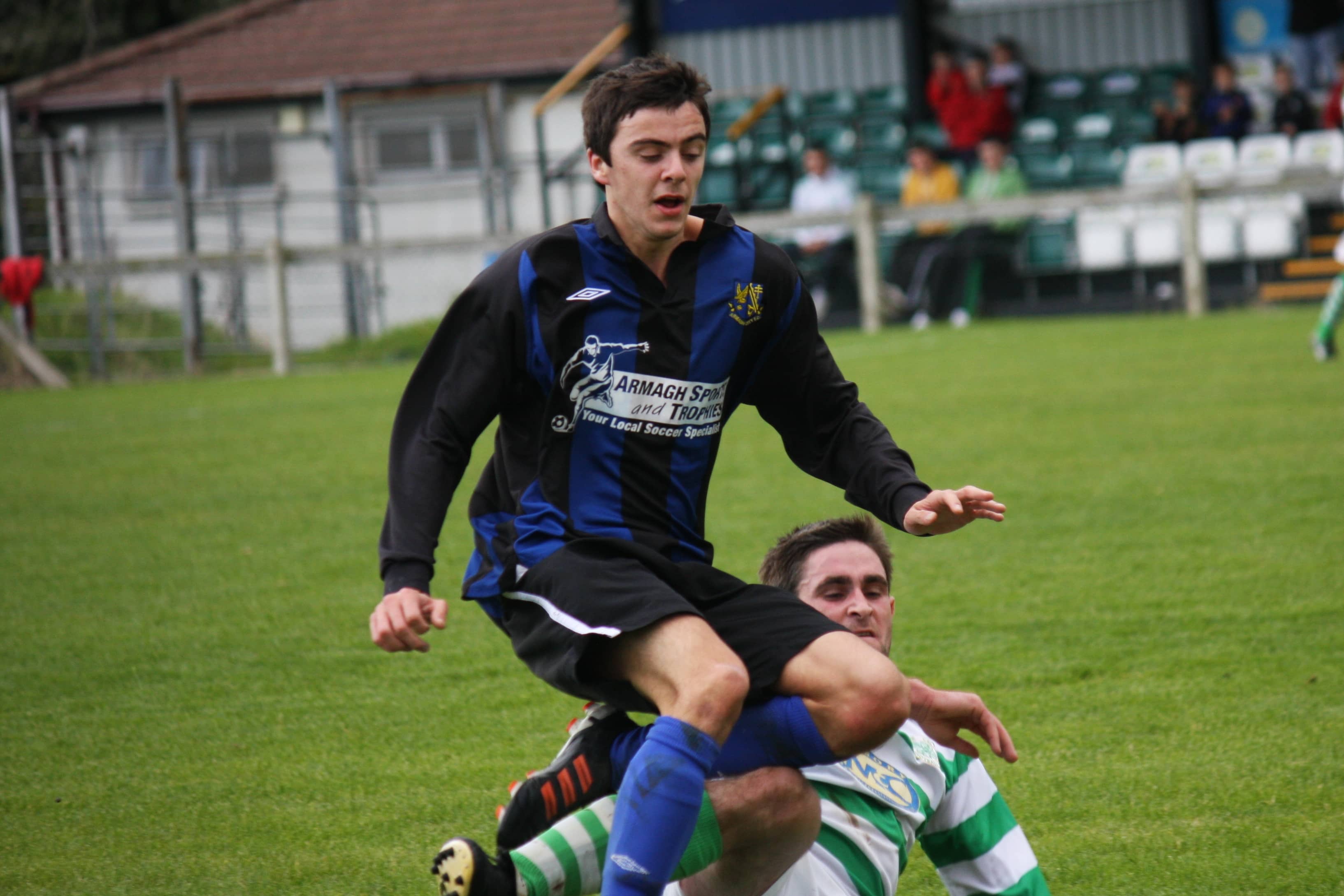 SATURDAY saw Armagh City’s winning streak come to an end when they played Lurgan Celtic in the Bob Radcliff cup, however, Armagh still remain undefeated in the Championship 2 League.

Armagh lead the attack from the start with Shea McGerrigan making a run down the left to win a corner only to be cleared by Lurgan Celtic’s defence.

Lurgan with the return break made their own early attack only to have their striker No.11 taken down in the box by keeper Paul Carville in action for City during his side’s defeat to Lurgan Celtic at the weekend.

Sean Daley as he came out to meet the attack. Lurgan Celtic was awarded a penalty for Daley’s mistake.

The Armagh supporters watched as Lurgan Celtic set up the penalty and must have been thinking that they were to go one down early in this Cup game.

The ball was struck and whether it was luck or pure instinct but Daley, standing in for an injured Morgan, dived to his left and pushed away a well struck penalty by Lurgan Celtic, Armagh supports breath a sigh of relief.

Four minutes later Lurgan were making an attack in Armagh’s half making their way into the box where they managed to get a shot off only to be saved again by Daley.

For the next ten minutes Armagh and Lurgan battle it out with no one side coming out on top. During an attack run by Armagh saw McGerrigan taken down just outside Lurgan’s 18yard area. Stephen Murray set up for the free and was saved by the Lurgan’s keeper.

Twenty minutes in Lurgan gave away a corner, taken by Mc Gerrigan, Lurgan managed to get the ball out of the box only finding the feet of Cullen, Cullen crosses into Cusack when he found himself in a decent position but blasted well over the top.

The game developed into a battle of the midfield for the rest of the first half with both sides struggling to create any worthy openings.

Into the second half and City were denied the lead on 50 minutes thanks to good defending from Lurgan.

Shea McGerrigan took a free on the edge of the box were Dale Montgomery slipped the ball to Cusack who was unfortunate to see his shot cleared off the line by Lurgan.

The midfield battle continued until McKenna went in for a slide tackle, missing the ball to take down Lurgan’s No.11 at the half way line giving away a free kick.

Lurgan put a fantastic ball into the box were Lennon was beaten in the air to allow a Lurgan attacker to head the ball to the top left of the net out of the reach of Daley, Lurgan Celtic take the lead 1:0.

For the next 20 mins Armagh and Lurgan exchanged halves. Armagh missed chances when the ball was sent up the pitch and intercepted by Murray who could not seem to find the net, a problem that he hadn’t had with prior matches.

City could have levelled the game with missed chances, but for the last quarter a loose seemed to be on the cards as City did not look like scoring.

With Armagh City out of the Bob Radcliff cup this will allow the team to concentrate on the more important league games. Armagh will be at Holm Park this Saturday and will play against Knockbreda, the second place team in the league, this will be a very import match for City so why not show support and watch them take on Knockbreda on Saturday 3pm kick off at Holm Park.