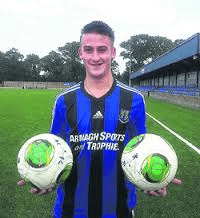 Armagh City will be hoping to topple the mighty Glentoran when the sides clash in the sixth round of the Irish Cup on Saturday.
And the local side should be at full strength for the encounter – the biggest occasion at Holm Park for almost a decade.
Several hundred fans are expected to accompany the east Belfast giants – current holders of the trophy.
City will be underdogs to win the tie but were boosted on Saturday with the return of flying winger Shea McGerrigan after several weeks out with a severe hamstring injury.
Armagh will also look to their current home form which has seen them unbeaten for 22 matches – dating back to last February – with a record of 21 wins and one draw.
That draw was against Ards in the last round of the cup but then City were able to see off their Premier League opponents in the re-play by 3-1.
That win was built on the back of a powerful second-half performance, showing that the local players should be more than capable of lasting the pace against their senior opponents.
Certainly, the Holm Park outfit have class all over the pitch, starting with goalkeeper Sean Morgan, who has been playing with increased confidence in recent weeks.
The central defensive partnership of Dara Noonan and Ultan Lennon is easily the best in Championship Two, while wing-backs Ryan McGerrigan and Dale Mongomery have been in fantastic form all season. Young Luke Grimley is a superb replacement across the back-four, if required.
With Shea McGerrigan now back in contention after his return from injury, there could be a midfield headache selection for manager Marty Rice.
Eamon Kelly, Liam Cullen, Matthew Hynds, Philip Donnelly, Paul Carvill, Kevin Keegan and Gareth Grimley (pictured) will also be bidding for a start in the glamour tie but one or two will have to be content with a place on the bench.
Up front there should be no such worries. For Stephen Murray will lead the line and try and improve on his 27 goal scoring tally this season. In all, he has notched up 56 successful strikes for the Holm Park club, putting him currently in seventh place on the all-time scoring list!
Glentoran should be aware of that threat as both their Director of Football, Roy Coyle, and manager Eddie Patterson, watched City in their recent 4-0 Intermediate Cup win over Comber Rec, when Murray hit a hat-trick! However, that match was played in atrocious conditions and they may have learnt little overall about an Armagh team which was greatly changed from the one which knocked Ards out of the tournament!
The long-awaited Armagh City v Glentoran sixth round Irish Cup tie kicks-off this Saturday, February 8, at Holm Park, Armagh, at 3pm. All welcome.
But before that epic encounter the local outfit will have a competitive dress rehearsal!
For tomorrow, Tuesday, February 4, City meet Banbridge Town in the quarter-finals of the Mid-Ulster Cup at Holm Park, kick-off 7.45pm.
It will be interesting to see if manager Rice decides to field a full-strength team in this encounter or, instead, brings in several fringe players to protect some of his senior side.
Armagh will certainly want to win this match against their County Down rivals but, at the same time, be mindful of incurring injury to key players.
However, City do have ready-made replacements all over the park. Gavin McParland is very much in the Murray mould and Andy Moore and Mickey Toland can add power and drive to the centre if called upon. Also, utility defenders Luke Grimley and Sean Mallon may also come into the manager’s mind for selection.
A very busy week of cup football for City and, hopefully, they will be celebrating on two fronts!