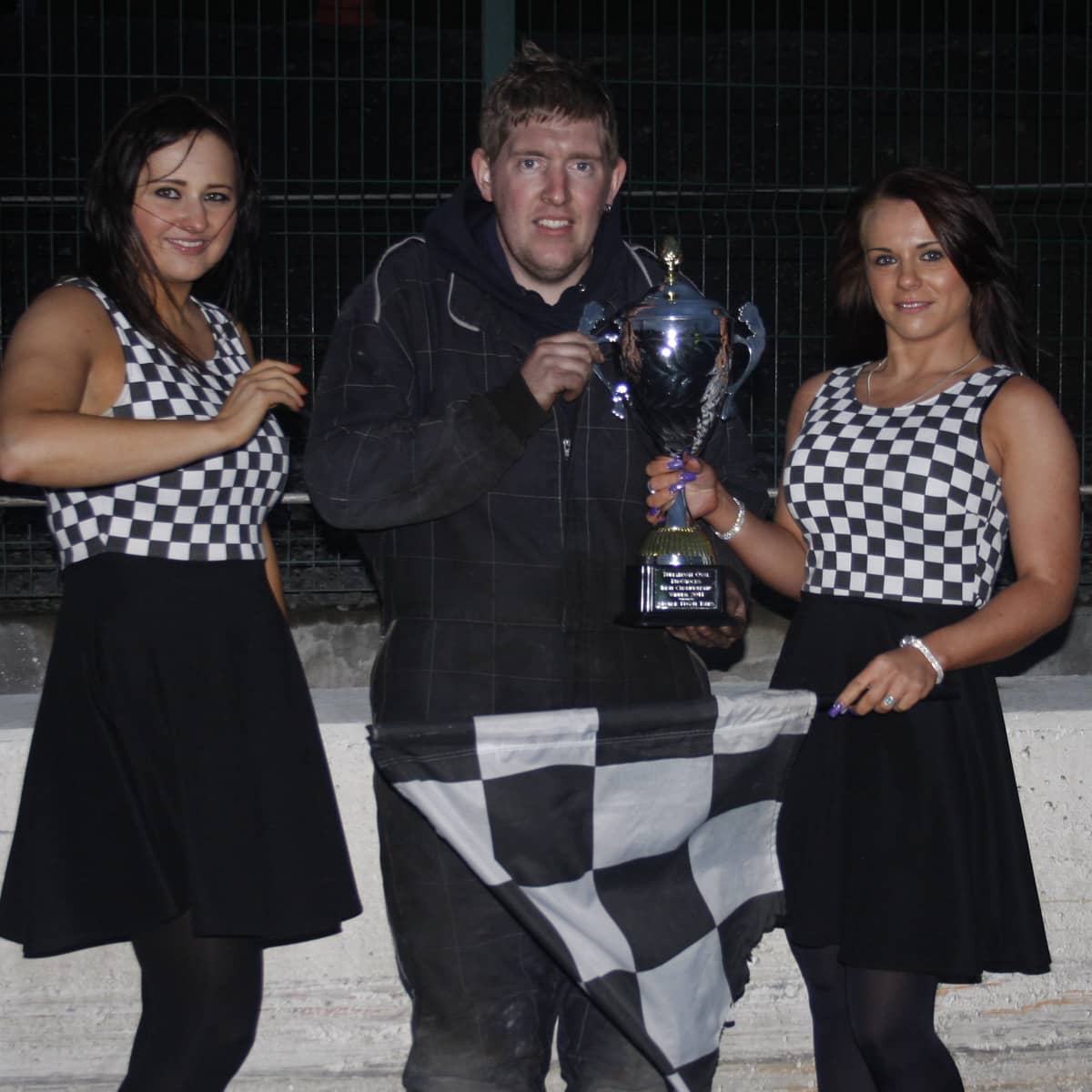 Strabane’s Dean Fleming was the big winner at Tullyroan Oval on Sunday, when he added the ProStocks Irish Championship crown to the European title he won earlier in the season.

The victory was tinged with controversy as on-the-road winner Billy Finnegan was excluded for a technical infringement at post race scrutineering. The ProStocks Irish Championship was always going to be a lively affair, and not surprisingly we had an early caution period for Mark Kinghan and Sean Mark stranded in the turn one wall. Polesitter Alan Haugh stretched ahead at the restart on the very slippery track, with Dean Fleming settling into second ahead of World Cup Champion Stuart Agnew. The status quo remained until the final stages of the race, when Raymond Harper and Billy Finnegan joined the fun from down the grid. As Haugh continued to hold a slender advantage, Harper went out after being nudged to the wall, leaving Finnegan now on Fleming’s tail for second.

With just two laps to go, Haugh came across the backmarking Jason Kee who was obviously determined to cost the leader time. It was not very sporting at all, but he held up Haugh who tried to spin him out, only to get caught up as he did so. In a flash his chances had gone, handing Kee’s running mate Fleming the lead. Finnegan had his eyes on the trophy though, and shunted Fleming wide on the final lap to land the Championship win in some style. There was more drama to come in the scrutineering bay though, as a rear axle infringement saw Finnegan excluded from the results. That handed the Irish Championship title to Fleming, ahead of Agnew and Haugh.

The Irish Revenge race later in the day saw a deserved win for Nikki McClelland over Ashley Hawe.

Both Superstox heats were dominated by Billy Finnegan, as he strolled to two impressive wins from an 18 car line up. Unfortunately, Billy then got into problems in scrutineering with his ProStock, and that, coupled with the antics of his crew towards some race officials saw him loaded up from the meeting in all formulae and excluded from all results.

Denver Grattan and David McMenemy thus inherited the heat wins, with the pair sharing the front row for the Tullyroan Challenge Cup final. It was frantic from the off with the bumpers crashing into turn one. McMenemy and Gary Grattan got dispatched in no uncertain terms, leaving Denver Grattan clear at the front. He went on the take a polished victory over Graham Fegan, who was having a very rare outing at the wheel of the usual Mark Murphy car. Irish Champion Kyle Beattie got the better of a good scrap with his brother Nathan and Jack Gilpin for third.

Scottish star driver Kerr Paterson was amongst the field of 2.0 Hot Rods, and with the NI Points Championship finely balanced between Adam Hylands and Shane Murray it was an interesting afternoon indeed. Murray showed his hand with a great drive to victory in heat one, reducing the deficit to Hylands to just one point. Local Tullyroan driver Allen Cherry took a great win in heat two over Hylands, as the Birches man cemented his lead ahead of the last race of the campaign.

Mervyn Emerson stepped off pole position to the lead in the final, and he wouldn’t be challenged right throughout the 25 laps. There was plenty going on behind though, as the star men were going at it hammer and tongs. As Emerson took a morale boosting win, Stuart Cochrane and Mark Madill followed him home. Fifth was good enough for Hylands to clinch the win in the NI Points Championship, just reward for his efforts right throughout 2014.

The Ninja Karts for the 6-11 year olds once again produced some absolutely fantastic racing, with Irish Champion Matthew Nicholl charging through to victory in the opening heat over Sam McNiece and Sophie Willis. Heat two saw the ever improving Stewart Hanna take the chequered flag over another excellent novice grader, Sam Percy.

The final was one of the races of the day, with Hanna charging ahead but he soon had the faster drivers bearing down on him. With one lap to go it looked as though Shea Fegan, from the meeting sponsors George Fegan Tyres, would scoop a great home win as he powered to the head of the field. It was a tremendous tussle, but Fegan, Nicholl and Sam McNiece all argued over the same piece of tarmac into turn one and crashed out. That left the door wide open for Ballymena’s Cole McFall to come through for a dramatic but deserved win. Nicholl recovered for second ahead of Hanna in third.

His younger brother just failed to lift the family silverware in the Ninja Kart final, but Graham Fegan Jnr made no mistake in the Junior Productions feature, although he did leave it very late indeed! Cameron Dynes earlier won the opening heat over Shea Duff, before Ian Riordan led Fegan home in the second race of the day.

Drew McKeown looked like he could well be the man of the moment in the final as he opened up a sizeable lead, but Fegan was soon on his case and reeling him in. He arrived on his bootlid with just over a lap to go, but the pressure told and McKeown made the slightest of mistakes. Fegan didn’t need a second opportunity, and he burst through for victory over McKeown and Riordan.

This weekend at Tullyroan Oval sees the big Gala Night, topped off by a Huge Fireworks Display for all the family. There will be other activities for the children too, whilst the 2L National Bangers Irish Championship will provide the fireworks on track. Support racing comes from the 2.0 Hot Rods, ProStocks and Reliant Robins.