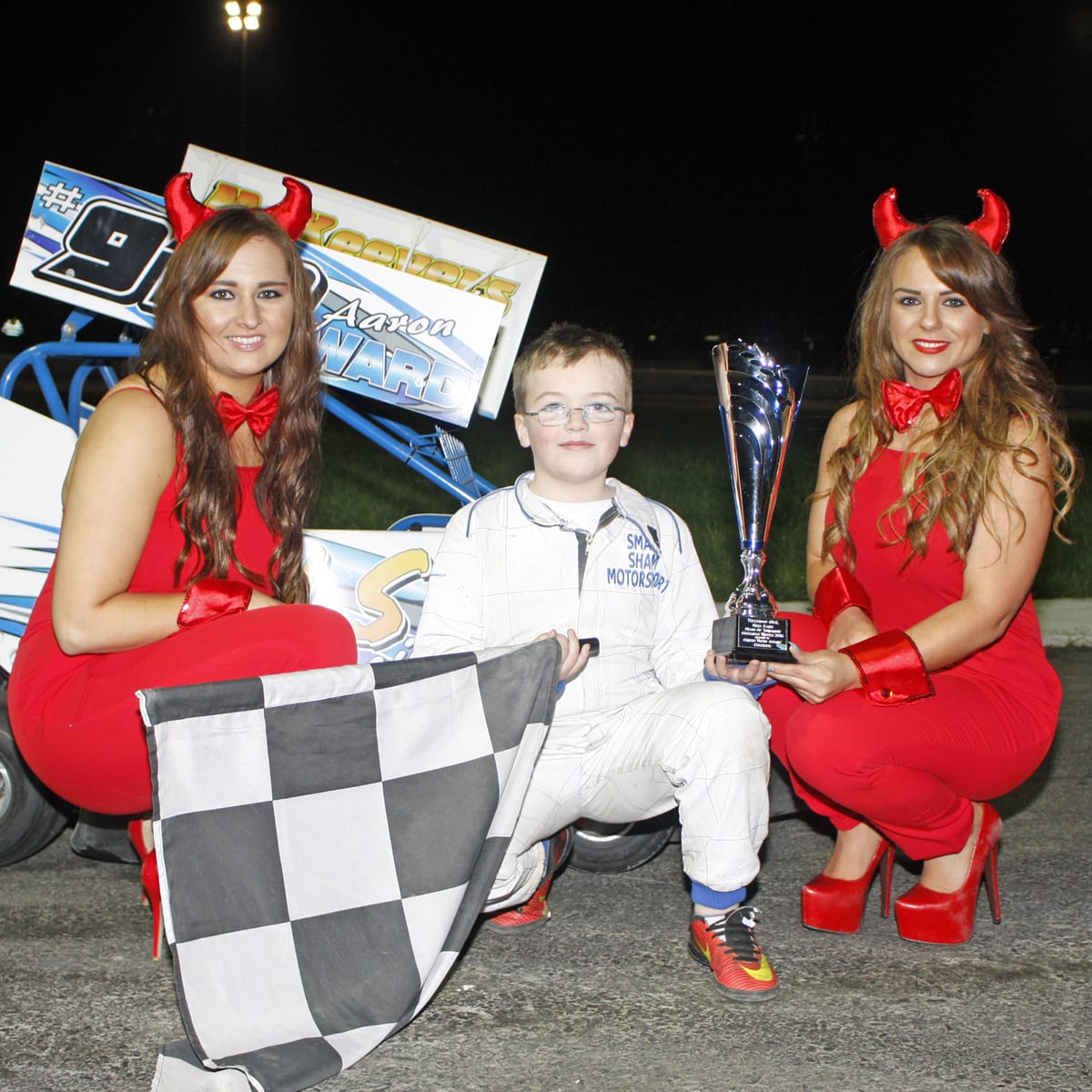 Amidst some great action and more than a hint of controversy, Portadown’s Dave Haugh and Glenavy’s Dan Shannon both successfully defended Irish Championship titles at Tullyroan Oval on Saturday evening.

As the bumper crowd enjoyed a superb end of season fireworks display, Haugh took the National Bangers Irish title and Shannon the ProStocks version, whilst other victories in the Greers Volvo sponsored meeting fell to Banbridge’s Denver Grattan in the Superstox NIOvalTV Series, Ballymena’s Aaron Ward in the Ninja Karts and Portadown’s Feargal McNally in the 2.0 Hot Rods. An excellent field of 2L National Bangers lined up in points scoring order from during the season for the Irish Championship showdown. Dublin duo Steven Reynolds and Stevo McGrath shared the front row, with McGrath hitting the front as all hell broke out behind. John Murray took a hefty knock on the Annaghmore Bend which brought about a race stoppage, with John unfortunately requiring medical attention for a nasty leg injury.

Another stoppage quickly followed when Mark Hughes upturned his car, and the atmosphere was at fever pitch as they set off for the restart. McGrath again led over Dave Haugh and Willie McFaul, with little between them as the race entered its final stages. With just over a lap to go Haugh made his move, spinning McGrath out to take up the running, before Hughes, who had been excluded as the cause of the earlier stoppage, returned to the track to illegally remove Haugh whilst going against the flow of traffic.

Amidst the ensuing confusion, the Race Steward instigated the ‘Malcolm Girling Rule’, which sees the leader reinstated to the win if illegally removed inside the last three laps of a championship event. Haugh thus retained the Irish title he won 12 months ago, with McFaul and Reynolds the podium finishers.

The Allcomers race saw Steven Bolton remove Reynolds very early on, only for Reynolds to exact his revenge illegally on the infield. As their feud continued, Race Control were left with no option but to stop the race. At the restart Leonard Dunn, the current ProStocks World Champion, showed that he can handle a National Banger too by grabbing a solid victory over Aaron Kelly and Paul Compelli. The meeting finished with an excellent DD, which had a couple of stoppages for Compelli in trouble and then a fire on Marty McKiernan’s car. It boiled down to a fight between McGrath and Stephen Boyd, with Stevo managing to finish off Boyd to take the win.

Boyd took both the Best Presented Car and Entertainer of the Day awards, whilst Murray had some satisfaction despite his injury as he received the Best Wreck trophy.

The other Irish Championship title on offer was in the ProStocks, and as the pack battled furiously behind it allowed the pole man, European Champion Stephen McCready, to edge clear of defending champion Dan Shannon. The two were right on the ragged edge as they circulated little more than a car’s length apart, and as the laps dwindled away it was going to be a do or die effort from Shannon on the final lap. Into turn three for the final time he went for the kill, taking McCready wide but not unseating him from the lead. As they came off the final turn, Shannon knew he had to spin McCready out to retain his title, but although he managed to spin the lead car McCready got the verdict on the line despite crossing it backwards!

It was a sensational finish, but McCready’s car then failed the post race technical checks for a minor infringement, but an infringement nonetheless. That elevated Shannon to the championship win ahead of Stephen Boyd and Robbie Wright.

The reverse grid Irish Revenge race saw a huge tussle between two former World Champions, Tam Agnew and Ryan Abernethy. They swapped hits and the lead on numerous occasions before Agnew made the telling move nearing the end by dumping Abernethy out wide to the wall to land the win. Ryan recovered for second ahead of Raymond Gurney, but it was Agnew who tasted his first victory in some time with a great drive.

The Grand Final of the lucrative NIOvalTV Series was the main event for the Superstox, with Cyril Hawe leading the opening heat until rapid blue grader Lee Davison charged past to record the win. As Aaron McNeilly and Sean Mark rounded out the top three, there was a huge battle between all the star men further back. Heat two followed a similar pattern with Hawe losing his early lead to Davison, who romped home to secure a rise to the red grade which has been on the cards for some time now. Mark and Denver Grattan chased him home.

Points scored over the three series meetings decided the grid for the NIOvalTV Grand Final, which saw McNeilly take a very impressive pole position ahead of Grattan, with Gary Chambers and Jordan Robinson on row two. Grattan quickly surged ahead as McNeilly spun off early on the Tullyroan Bend. Davison was on a charge from down the grid, relegating Chambers to go second at half distance. Try as Lee might, he couldn’t get on terms with Grattan as Denver took the victory in fine style to receive a superb trophy and some race tyres courtesy of the sponsors. Davison and Chambers completed the podium finishers.

The local kids in their Ninja Karts were joined by welcome Scottish visitor Scott Allardyce, with Crumlin’s Corey Stirling taking a commanding win in the opening heat from pole position over Sam Percy and Bobby Henderson. Heat two saw Lily Gallagher and then the impressive Brandon Litter takes turns out front, before Irish Champion Stewart Hanna took over to take a fine win over Litter and Gallagher.

The track was somewhat slippery for the final of the Stars of Tomorrow Challenge, with Litter the first to show in the lead ahead of Percy. The man on a mission however was Aaron Ward, who had started well down the field after a heat two disqualification. He was relishing the tricky circuit, and swept past Litter to take up the running and race home to a great victory indeed. Hanna and Gallagher completed the top three at the end of a thrilling championship race.

Aaron Beattie, a recent newcomer to the 2.0 Hot Rods ranks, led their opening heat from flag to flag for a morale boosting win ahead of Christopher Kincaid and Feargal McNally. Brian Cherry was the first to show in heat two, leading until half distance before succumbing to pressure from Kincaid who took a fine win over McNally and Ryan McClure.

Cherry led the final for the opening laps, before he was unceremoniously bumped into a spin by McClure, which earned the latter a disqualification. That handed the lead to McNally, and he never looked back as he gave his new Vauxhall it’s maiden victory over Kincaid and Beattie.

The next meeting at Tullyroan Oval is the first of the winter series on Sunday, November 27th at 2pm, featuring National Bangers, Ninja Karts, 2.0 Hot Rods, ProStocks and Lightning Rods.

Inset: Portadown’s Dave Haugh retained his Irish Champion status by winning the big race of the night for the Bangers at Tullyroan Oval on Saturday night in a meeting sponsored by Greers Volvo of Antrim and Coleraine.