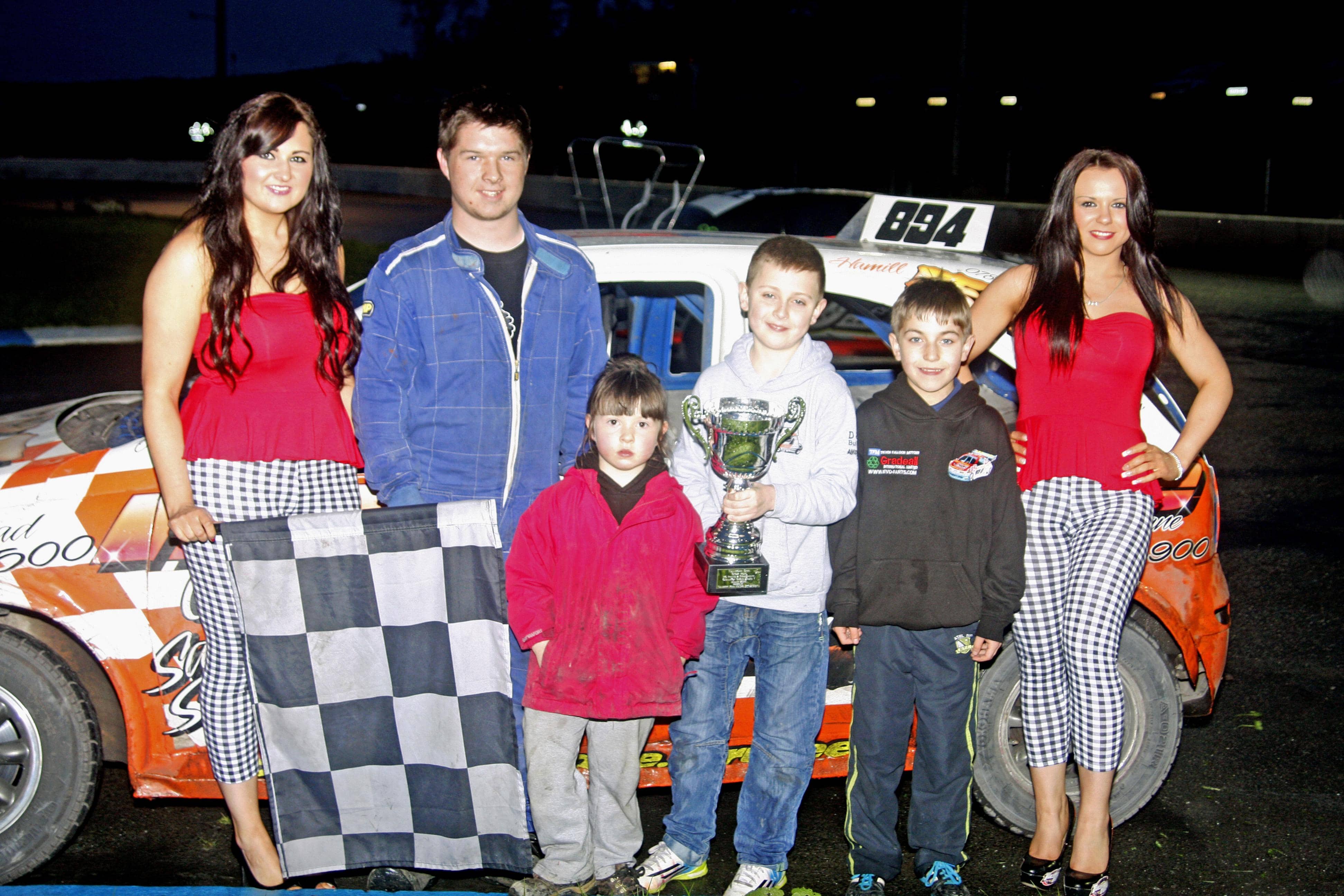 Portadown’s British Champion Glenn Bell mastered the tricky conditions on a damp evening at Tullyroan Oval on Saturday, taking the honours in the National Hot Rods final. There was some top class racing on the slippery track from all the classes on show, with other feature race wins falling to Limerick visitor Colm O’Sullivan in the Stock Rods, Irish Champion Kyle Beattie in the excellent Superstox and Jordan Robinson in the Junior Productions.

It was Round 11 of 14 in the National Hot Rods World Championship qualifying series, and novice grade driver Bill McCurdy from Broughshane set the pace in the opening heat. Simon Kennedy soon took up the running, before fellow Dungannon man Keith Martin swept through to take the opening win of the night ahead of Bell. Series points leader Andrew Murray then took the win in heat two, with Bell again the runner up ahead of Stewart Doak.
McCurdy again built up a healthy advantage in the final, but Bell had the bit between his teeth as he sought to go one better than his brace of runner up positions in the heats. He gradually whittled down McCurdy’s lead, before surging ahead to take the flag in emphatic style. Murray came through for second ahead of newly crowned European Champion John Christie, who had earlier been given a rousing reception as he showed off his European silverware to the local fans.

The Stock Rods are arguably the most competitive formula on the local tracks at present, and close wheel to wheel action featured throughout the evening. Ballymena’s Micky McFall was the pacesetter in the opening heat, leading all the way to take the chequers ahead of Kells man Carl Sloan. Another Kells based driver, Derek McMillan, took the spoils in heat two over Colm O’Sullivan.
Aggregate points gave O’Sullivan pole position for the final, which was the opening round of the PC Paints & Components Challenge Series. Welcome Republic of Ireland visitor Colm made no mistake in the big race, leading all the way to the line to land the win. McFall and fellow Ballymena ace Victor McAfee chased him to the flag.

A very healthy 17-car grid of Superstox came under starters orders, and produced some of the best contact Stock Car racing seen at the track in some time. Nathan Beattie hit the front just after midway in the opening heat, but he was unable to stave off a superb last bend hit from reigning NI Points Champion Gary Grattan, with the Banbridge man taking a fantastic victory. Lee Davison held sway at the front for much of heat two, before Irish Champion Kyle Beattie swept ahead. Grattan was right on his case though, and moved into top spot with 5 to go. Beattie wasn’t to be outclassed though and came back hard into the final corner, but was just unable to unseat Grattan who completed his double of heat wins.
The final was another superb encounter, as star men Kyle Beattie, Gregg Hyndman and the Grattan brothers Gary and Denver traded blows for many laps. Jeff Minish got himself in on the action too, with the crowd loving every minute of their titanic battle. A caution period brought the star men into touching distance of early leader Davison, and Auchnacloy’s Beattie was able to power ahead and record a pleasing win after a top class session from the open wheelers. Gary Grattan and Hyndman filled out the podium.

The young teenagers in the Junior Productions were contesting the opening round of the Murrays of Randalstown Young Guns Series, and promising novice Drew McKeown held the more established stars at bay to collect his first ever win in the opening heat over Ethan Dilly and Edmund Davis. Jordan Robinson then took a deserved victory in heat two over top lady racer Caoimh Donnelly, which was enough to secure pole position in the final for the young Portadown man.

Despite heavy pressure right throughout the feature race from Davis, Robinson was able to hold on all the way to the flag for one of his biggest wins to date. It was a well deserved victory after an excellent drive, with Davis and Waterford’s Ian Riordan chasing him over the line.