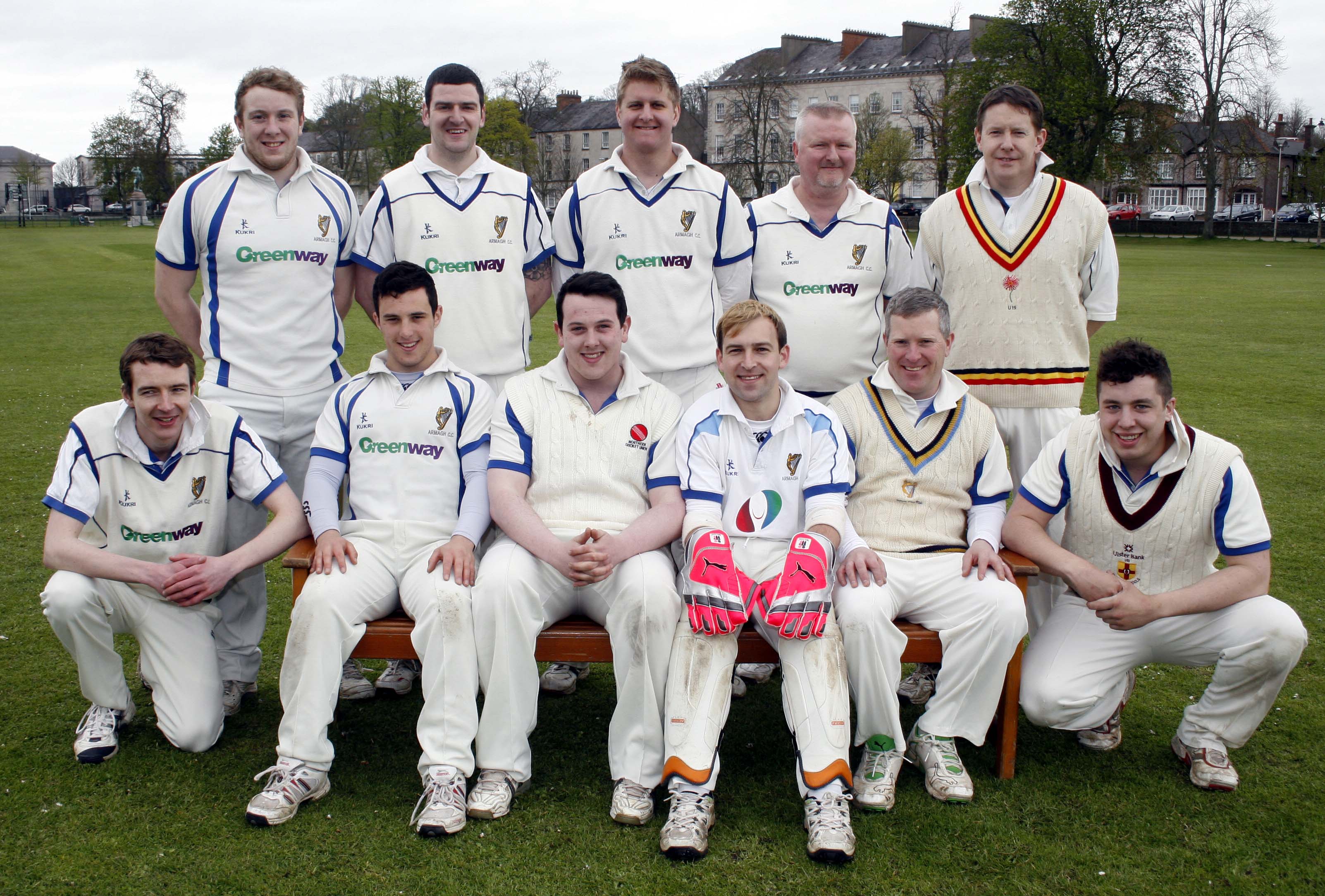 ARMAGH got a crucial win in their Ulster Bank Section 2 campaign when they won a tightly-contested encounter against local rivals Millpark in a contest that ebbed and flowed and could have went either way.

Armagh were delighted to welcome back some senior players to field a stronger looking lineup as Armagh were invited to field first by a Millpark team delighted to bat first after winning the toss. The delight was with Armagh though when they claimed the big early wicket of Charles McCrum when Andrew Smyth bowled him with a seaming delivery.

Smyth was at it again when he removed Ikram courtesy of a catch behind the stumps by McCarter and when Doyle had McCart caught at square leg after a sharp bouncer Millpark looked in trouble. Smyth continued his great spell after the first drinks break when his lethal combination of pace, bounce and movement off the pitch saw the dangerous Dempster and SZ Ali both caught at the wicket by Armagh wicketkeeper Gareth McCarter as he finished a terrific spell of bowling with ten overs and four wickets for only 28 runs.

When Michael Hoey had the aggressive Talbot sharply caught at backward point by substitute fielder William Dougan Millpark looked in turmoil but to their credit they battled hard throughout and their lower order made the most of some sloppy Armagh fielding and bowling to increase their score to a competitive level through Glover, Wright and Jose who all scored 23 each.

Stuart Lester took two wickets in an unusually expensive spell while Andrew Walbran and Matthew Steenson took one each, the latter finishing the Millpark innings at 191 when Wright gave McCarter a fourth catch at the wicket. Millpark’s score of 191 was probably slightly below par on a good pitch and outfield but would undoubtedly prove a testing target for the home team batting second.

Armagh would have been hoping for a good start in pursuit of a challenging score but didn’t get it with the loss of three early wickets. Michael Villiers was caught at mid-off and Michael Hoey was caught at square-leg attempting an ambitious hook shot off the pace bowling of SZ Ali. What followed was a hugely controversial moment when new batsman Gareth Robinson edged the ball seemingly well short of the slips only to see the “catch” claimed by McCrum.

After deliberation from the umpires the Armagh batsman was given out to his clear disbelief and disgust. Stumbling at 28-3 the Armagh innings was desperately in need to stability and rebuilding and this was provided by Matthew Steenson and Colin Russell who mixed good defensive play with ruthless punishment of any poor bowling as the score crept up and the change bowlers were seen off with seemingly little trouble. Steenson was arguably the more fluent of the two, striking the ball crisply around the ground but as he moved into the 40s he seemed to grow frustrated with the tight bowling and was caught in the leg side.

It was a shame as his score of 46 was a wonderful knock containing 3 boundaries and 3 sixes as part of an important partnership of 81 with Russell. With this Armagh suffered another wobble as Russell was unable to get the support he needed from Philip Doyle or Lester as Armagh stuttered from 108-3 to 120-6. Harry Doyle came to the crease and looked to play sensibly as he and Russell looked to move the ball around the ground taking as few risks as possible and this looked to be working as their stand grew and Russell passed an assured half century that contained six boundaries. Armagh then suffered another blow when Colin Russell smashed Charles McCrum towards the long-on boundary that looked set for six all the way but the home players were shocked to see Talbot take a quite superb catch on the boundary as the Armagh player departed for an excellent knock of 51. Andrew Smyth was trapped lbw soon after by McCrum leaving Armagh 147-8 and in dire trouble with 45 runs still needed for victory as Gareth McCarter joined Harry Doyle at the crease.

Millpark will have been confident of victory at this stage but the Armagh pair are more than capable batsmen and with a combination of assured strokes and their speedy running between the wickets the total required decreased steadily and as a result Millpark’s bowling and fielding became ragged and nervous as the tension grew.

Doyle struck boundaries in successive balls off McCrum and as the excitement grew amongst the large assembled crowd after the 3rd XI Cup success on the back pitch. Millpark’s opening bowler Stu McCart returned from the Courthouse end of the Mall but without success as McCarter launched a poor full toss delivery over the mid-wicket boundary for six. With this blow Millpark seemed to lose belief and with the runs required now in single figures the Armagh pair were able to pick off the remainder of the target with comparative ease and when the Armagh captain Gareth McCarter flicked McCrum through mid-wicket for the decisive single the crowd roared to cheer an exciting and potentially crucial two wicket victory with two overs to spare.

After the game, Armagh captain Gareth McCarter was delighted with the way his team had battled to a crucial victory that had looked unlikely at stages.

“We certainly knew how to make things hard for ourselves today but we came through that to get the job done in the end and get the points that we needed,” he said. “Andrew Smyth was absolutely terrific with the ball but we lost focus in the field and let them back into the game with some sloppy play. We shouldn’t have been needing to chase as many as 190 and made hard work of it when we did. We need all of the batsmen to put the same value on their wickets as Matthew Steenson, Colly Russell and Harry Doyle did because that’s what wins games. It was a relief to get over the line and I’m sure it was exciting for the people watching at the Pavilion. I am an incredibly nervous watcher of situations like that, I would nearly rather be in the middle! Credit to Millpark for what was a well contested game of cricket and one we are delighted to take the points from.”

This weekend Armagh will look to build on their success against Millpark when they face the long journey to Larne. The game starts at noon.