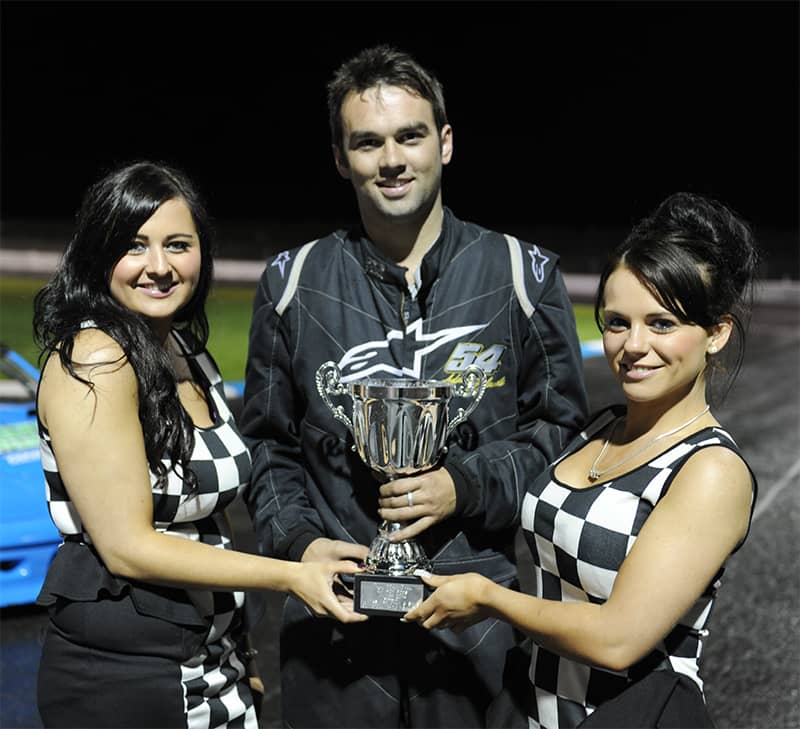 After having a weekend to forget at the recent World Championship meeting, Portadown’s Adam Hylands bounced right back to form at Tullyroan Oval on Saturday night when he won a pulsating 2.0 With 16 cars on track for the opening heat, there was little sign of post-World Final blues in the 2.0 Hot Rods. Philip Beatty drew first blood with a controlled victory over former World Champion Wayne Woolsey, with the big talking point a huge crash for Mark Madill which saw the recently crowned gold roof Shane Murray start his reign with a disqualification.

Woolsey went one better to win heat two at an absolute canter over rapidly improving novice Jeff Riordan and veteran John Murray. In the final Richard Stewart quickly demoted Riordan on what was now a very wet track, before a clash between Stewart, Stuart Cochrane and Denver Grattan saw Cochrane’s demise and the yellow caution out. At the resumption, Beatty surged ahead before Hylands made his move for the lead. There was contact between the two, but a Stewards Enquiry at the end of the race proved the Hylands was in fact inside Batty when he tried to close the door, and Hylands held on to the win. Beatty had to make do with the runner up position ahead of Stefan McClelland.

Once again the Stock Rods had three eagerly contested races, with Kells lad Derek McMillan the victor in the opener over Colin McNiece and Marc Morrell. Waringstown’s Ben McCully put his recent bad run behind him with an excellent drive to the win in the second race of the night, with Morrell and McMillan this time the placemen

Come final time and Bobbie Johnston set the early pace, before Morrell pushed hard on the outside line to take up the running after a great pass. Marc quickly pulled clear but towards the finish McCully was coming on strong and worked his way onto terms with Morrell. The Ahoghill lad was more than equal to it though, and hung on gamely for a very welcome return to victory lane. McCully was a well pleased runner up, with Jonny Cardwell in third.

A perfectly timed last bend lunge by Steven Haugh saw him take a splendid victory in the opening ProStocks race of the night over Ashley Hawe, before Mark Kinghan took heat two with a controlled drive over Haugh and Hawe.

Come final time it was all about Ashley’s brother Cyril Hawe though, as he withstood some huge pressure from those behind, and a late caution period too,  to lead Haugh and Kinghan to the chequers for an impressive victory.

Breakneck speeds and side by side action were once again the order of the day from the young Ninja Kart pilots, who produced three different winners from their three races. A late race stoppage in heat one when Joel McPeake and Sam McNiece tangled brought the star drivers right into contention, and opened the door for Adam McFall to take the win over Aaron Ward and Shea Fegan. Belfast driver Fegan then took  a great win in heat two, slipping past leader Sophie Willis to take the flag.

In the final Ward made a great getaway from the blue grade to storm into the lead, and despite Fegan keeping him in his sights the young Ballymena man marched home to collect yet another trophy from his recent burst of form. Behind runner up Fegan, Willis caught the eye with another great drive to third ahead of Adam Weir.

Once again we had yet another debutant in the ever improving field of 1300’s, with Dungannon’s Kyle McClean the latest to take up the gauntlet of the rough and tumble formula. Former ProStocks star Tam Agnew took the opening heat win over Curtis Greer and Ben Armstrong. It was role reversal in heat two, as Greer got the better of Agnew this time to land the victory, with Armstrong again in third.

The final had more than its fair share of drama, with the hits handed out in every direction early on. There was a long delay when Armstrong had a heavy hit on turn one and was very fortunate to avoid rolling right over. A quick trip to hospital gave him the all clear with just severe bruising to his shoulder. Once hostilities resumed Greer made light work of the depleted field to take his second win of the evening, with McClean second on his first outing ahead of Ryan Patton.

Racing continues at Tullyroan Oval on Sunday August 17th (2pm), when the exciting Micro Bangers return to the track for what promises to be some great racing and most likely some major carnage too! The Lightning Rods will contest their Tullyroan Challenge Cup, with the programme completed by the Superstox and Reliant Robins.