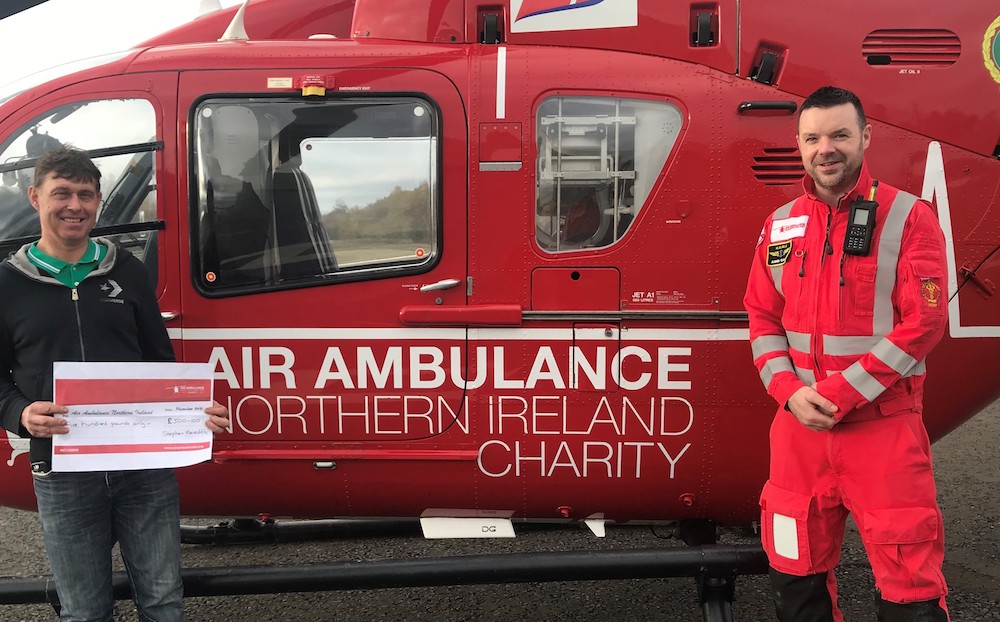 Tandragee man Stephen Meredith and Dr Aidan Cullen, a Consultant at Craigavon Area Hospital and one of the doctors manning the Air Ambulance NI

A Tandragee man left in a coma after an horrific accident while working at a yard at his home has visited the NI Air Ambulance to hand over a cheque and say ‘thank-you’ to the medics who came to his aid.

Stephen Meredith was out working with his son on the family yard in August 2020, when a steel beam they were moving dropped.

It crashed into Stephen, knocking him to the ground with landing on top of him.

Additionally, Consultant Dr Aidan Cullen, who had just finished up for the day at Craigavon Area Hospital, was notified about the incident and drove straight to the scene.

On arrival, Dr Aidan, along with the NIAS crew, delivered pre-hospital care that would enable Stephen to travel comfortably in the road ambulance until his transfer to the Royal Victoria Hospital, Belfast for his further treatment and care.

Stephen sustained multiple broken bones, a punctured lung and was in a coma at the Royal Victoria Hospital for 11 days.

Although Stephen’s injuries were severe, against all the odds he managed to get home to his family the following month.

Stephen said, “It was a traumatic experience, and I am so grateful for the care I have received at scene from NIAS and Dr Aidan Cullen, coming in his own time to help, as well as the fantastic care from all of the medical team at the Royal Victoria Hospital.”

Dr Aidan had responded in his role as BASICS, the British Association for Immediate Care Scheme.

Stephen wanted to relay his particular thanks to Dr Aidan for going out of his way to help and, as Dr Aidan is also one of the Helicopter Emergency Medical Service (HEMS) Doctors, flying on the air ambulance, he decided to donate to the Air Ambulance NI charity.

Stephen added: “It made me realise the great work that the medics like Dr Aidan do every day at life threatening scenes that the air ambulance flies to.”