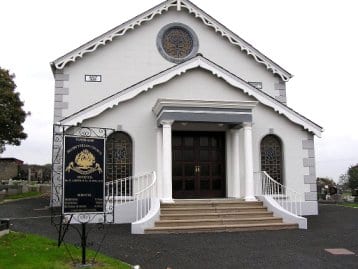 A Tandragee church’s hopes of providing a new graveyard to allow families to be buried close to their place of worship have been dealt a cruel blow by DoE Planning Service.

The town’s Presbyterian Church, on the Markethill Road, had submitted a planning application for the new graveyard, which would have had more than 300 plots and served congregational needs for decades to come.

The application, which also included tree planting and other associated site works, was lodged with Planning Service last October.

But Planners will return a recommendation to refuse the development when they meet with Armagh City and District Council next Monday night, March 2.

In supporting information submitted with the plans, it states that, after discussions with Church Session, it was estimated that there was an annual burial rate for the Tandragee congregation of 11 a year.

It was pointed out that the new graveyard – a good 250 metres away from the existing burial ground – would have lasted “considerable time” as there was an adequate number of plots provided.

Planners were also informed: “The graveyard – in terms of layout and appearance – would be in keeping with the area and surrounding graveyards.”

It was stated that there was no presence of any water features nearby, including rivers, streams, wells, ponds, springs or land drains that could be affected.

“With this in mind, there should be no reason why this project cannot go ahead as planned,” the design team point out.

The graveyard would be situated on a relatively level piece of ground, and in close proximity to the church – which dates back to 1828 – and the church hall.

Planners were told that the new graveyard is essential.

The submission stated: “We feel there is a need for a graveyard in this area as it allows church members and families to be buried in the area where they worship.”

Widespread consultation was carried out into the plans and Transport NI, Roads Service and Armagh City and District Council’s environmental health department all came back saying they had “no objections”.

Nor were any objections raised by members of the public, and the Northern Ireland Environment Agency’s Historic Monuments Unit noted “no architectural concerns” in relation to the proposed development.

The NIEA’s Water Management Unit, however, reported: “This type of development can have potentially significant ground water issues associated with them.”

DoE Planning Service is refusing the application on the grounds that it states it is contrary to Planning Policy Statement 1  General Principles, in that it has not been demonstrated that the proposal will not have an adverse impact on the ground water and the water table.

It also states that, having notified the agent and applicant under Article 7 (4) of the Planning (General Development) Order (Northern Ireland) 1993, that further details regarding the proposal were required to allow it to determine the application – and having not received sufficient information – it “refuses this application as it is the opinion of the Department that this information is material to the determination of this application”.

As is normal procedure, the applicant will have the right to appeal against the decision to refuse.