Somme benches to be dedicated in Armagh, Tandragee, Markethill, Loughgall & beyond 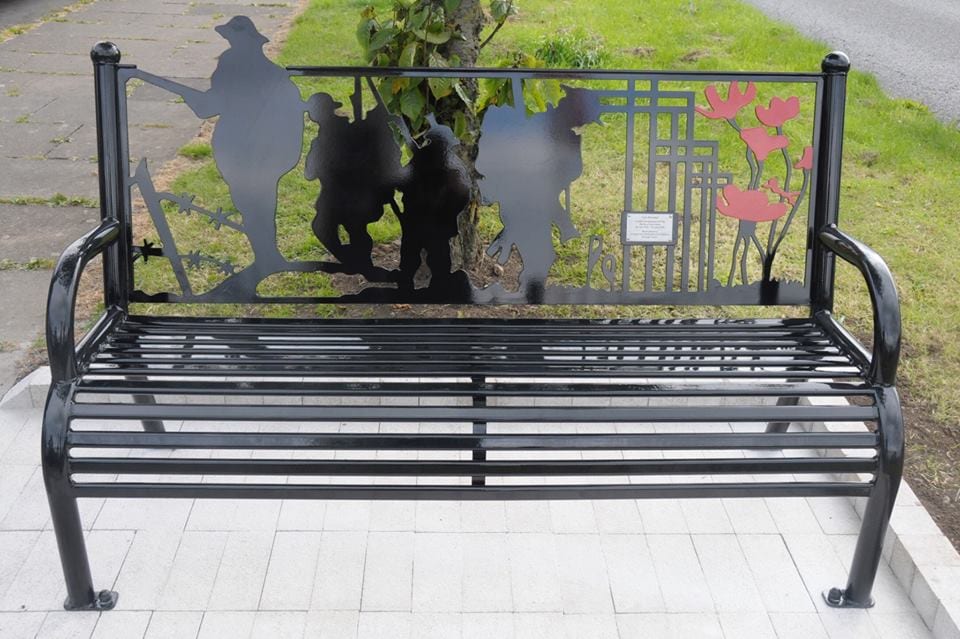 It will be with pride and poignancy that specially-crafted benches to commemorate the centenary of the Battle of the Somme will be dedicated across the borough this Friday.

Various events and ceremonies are being held locally for the unveiling of the new seats – 15 in total – which are being placed at war memorials and cenotaphs across the Armagh, Banbridge and Craigavon borough.

The seats depict four soldiers going into battle and, in the top right hand corner, the blood-red poppy which represents remembrance of those who died.

Friday, July 1, marks the 100th anniversary of the first day of the Battle of the Somme in 1916,which was expected to produce a major victory which would bring to an end the carnage of the First World War. But it did not end until the following November, when more than one million soldiers from both sides had been killed. The total number of Irish casualties, north and south, cannot be calculated with certainty but they affected every part of the island.

The ABC Council agreed to the purchase of the benches as a permanent commemorative installation at all war memorial for which council is responsible for maintenance.

The local branches of the Royal British Legion have been largely involved in leading and planning events with the assistance of council.

And, most recently on Sunday past, the village of Richhill saw a large turnout as the bench there was dedicated.

Focus this Friday, July 1, will fall on Armagh, Tandragee, Markethill, as well as other towns and villages within the borough.

In Armagh, there will be two events.

City of Armagh Branch RBL, like all other branches in the county, will be holding events to mark the Somme centenary.

There will be a short service at 7am on Friday morning at the Cenotaph on the Mall.

This will include a silence being observed at 7.20am to mark the time the first soldiers of the 36th Division went ‘over the top’ on the Somme.

Later that day there will be a parade from the Legion at Dobbin Street to the Cenotaph for a service starting at 7pm. It will include the laying of wreaths and Act of Remembrance.

Lord Caledon and Alderman Freda Donnelly will each be unveiling a memorial seat dedicated to those who fought at the Somme.

As a branch, Armagh RBL have been dedicating a memorial seat each centenary year in tribute to those who sacrificed their lives in the name of freedom in the Great War.

Friday’s seat will be the second of four which will be placed on the Mall memorial to compliment the three Irish Yew Trees, which were dedicated in 2014 in tribute to the three Irish Divisions.

This year the ABC Council will also be providing a memorial seat so this too is being dedicated during that service.

As the branch has done so over the past two years, the names of those who lost their lives in battle and were from the Armagh area will be read out.

Because there were so many casualties in 1916, only the names of those who died up until July 4, 1916, will be read on Friday.

The names of those who died after July 4 – and up until December 31, 1916 – will be read out during the Armagh Remembrance Day ceremony on Armistice Day, November 11. Meanwhile, in Tandragee, proceedings get underway at 7pm, assembling at the mini-roundabout on the Markethill Road at 7pm, before setting off at 7.15pm. Participants will make their way to the War Memorial at the top of the town where a service will be held, and the bench dedicated at 7.30pm.

The parade will leave off again afterwards, walking a short distance before disbanding.

In addition, in a separate event – being organised by the Tandragee RBL branch – an ‘All Night Vigil’ is being planned at the town’s war memorial.

There will be a presence maintained at the memorial from 10pm tomorrow, Thursday, June 30, remaining throughout the night until 7.30am on Friday, July 1 – again marking the time the soldiers ventured out into no man’s land 100 years ago.

In Markethill, the evening’s bench dedication takes place at the later time of 10pm.

Again the town will join in a ceremony at the war memorial, which will include an Act of Remembrance and the laying of wreaths on behalf of the local Legion branch and others.

Earlier in the day, Markethill District LOL No 10 will hold another event to commemorate the Fallen, gathering at 7am for an Act of Rembrance, before a whistle sounds out at 7.30am, signalling the very moment the soldiers’ advanced to be cut down under enemy fire.

As in Armagh, the names of those from the Markethill area who perished at the Somme will be read aloud in a ‘roll call’ of Remembrance.

A bench is also being dedicated on Friday, in Portadown at 7am. Portadown District Orange will hold a wreath-laying ceremony and drum head service at the war memorial, moving off from Carleton Street at 6.50am to meet up with the Royal British Legion.

Other benches will be dedicated on Friday in Rathfriland at 7am, Banbridge and Donaghcloney at 7.30pm and in Lurgan at 8.15pm.

Meanwhile, the last bench to be formally unveiled will be in Loughgall.

That event is due to take place on Saturday, July 9, at 3pm. There will be a small gathering of the village committee, as well as local clergy and representatives of the Royal British Legion, who will lay wreaths and take part in an Act of Remembrance.

During the course of bench proceedings, additional paving stones to honour two Victoria Cross recipients will be unveiled.

The special stones – dedicated to the memory of William Frederick McFadzean and Geoffrey Shillington Cather, who died on July 1 and 2, 1916 – will be unveiled in Lurgan and Portadown respectively.

If you are planning any events to mark the centenary of the Battle of the Somme, please email to info@armaghi.com and we will add them to this report to make others aware.

Pictures: Councillors at the unveiling of the commemorative bench in Dromore, and, local Legion representatives are present for the ceremony of dedication for the new Battle of the Somme seat in Dollingstown.