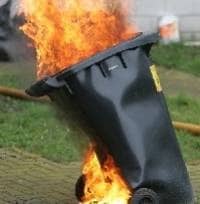 Armagh City councillors have praised the actions of a local community activist who defused a potentially violent situation on the evening of the 12th July. Councillors Roy McCartney and Cathy Rafferty said his intervention was greatly appreciated by the local residents and showed real leadership.
Explaining the situation Councillor McCartney said: “A small number of drunken youths stole bins from local resident’s gardens in Emania Terrace and set fire to them on the Killylea Road. I can only surmise that they were hoping to draw the PSNI into a confrontation.
“The young people who did this do not have a relevant political thought in their heads.  Their actions on the 12th at that time of night, in that location, only affected the local Nationalist community.
“There was absolutely no justification for this behaviour, and the local residents are sick of it.
“Speaking to them it seems those involved in this nonsense were not from the immediate area. The same local residents praised the actions of a community representative from Drumarg who halted further theft and burning of bins and cleared debris from the Killylea Road, and I add my admiration and sincere thanks to that individual for relieving the pressure on an already stressed community.
“I will endeavour to get those residents who have had their bins stolen and vandalised issued with replacements as soon as possible.’Councillor Cathy Rafferty added: “The actions of this community representative is typical of the good work he, and others like him, do week in week out, all year round. They represent their communities, seeking neither limelight or recognition, yet showing leadership and thinking of other people, even in situations where they are putting themselves at risk.
“I only wish such leadership could be shown by others given the recent actions by the Orange Order.  I know, and the people of Emania Terrace, Nialls Cresent and Navan Terrace know where real leadership was shown on the 12th July.”