'On set, the DIY SOS team are amazing. Every one of them is down to earth, helpful and ensuring all the volunteers are safe and managed' 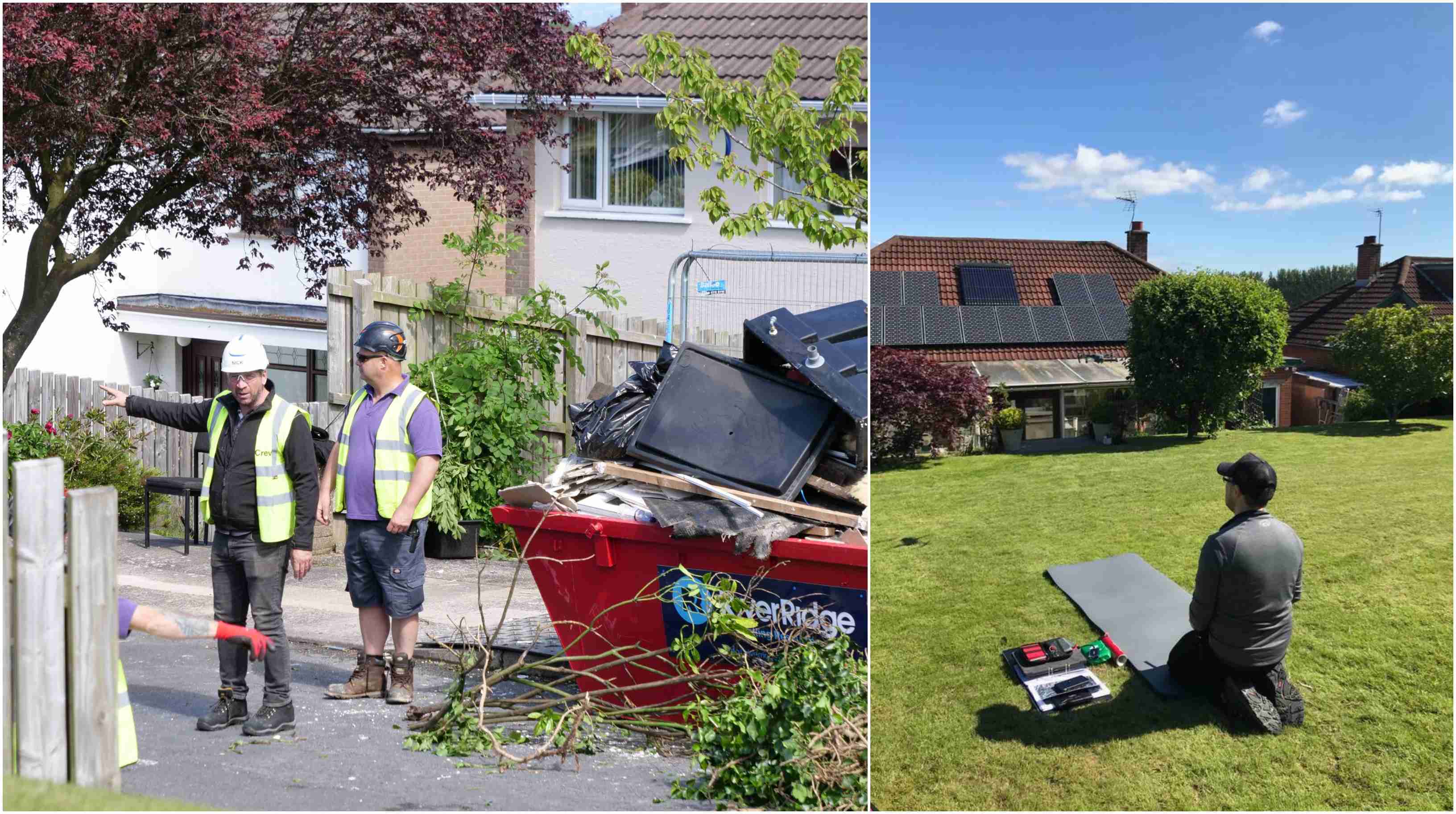 A Richhill man has been enjoying a bird’s eye view as shooting starts on one of the BBC’s most popular daytime TV shows.

Paul Gywnne, of Airwolf Visual Ltd, has been working to supply drone footage on the first ever episode of DIY SOS: The Big Build to be filmed in Northern Ireland.

TV host Nick Knowles and his crew – including Bangor man and the show’s project manager Mark Millar – began the first day of filming on Tuesday.

It was in April that the show launched an appeal for people to come out and help make the McCreight family’s dream come true.

Mum Mandy (46) and the two kids, 16-year-old Ben and Kara (13), have complex health needs attended to by their main carer, dad Davey (57), in a house that is totally unfit for the family’ many medical needs.

Mandy has Ehlers Danlos Syndrome, Postural Orthostic Tachycardia Syndrome, Fibromyalgia and Gastroparesis and she is bed bound over 80% of the time, so often stays upstairs in her bedroom for days at a time, as the stairs are too difficult to negotiate.

Son Ben is working hard at school but he has a learning disability, Autism and Ehlers Danlos Syndrome. He doesn’t like to visit his mum in her bedroom, so they rarely get to spend any time together, so he spends all his time at home downstairs with his dad.

Daughter Kara also has Ehlers Danlos Syndrome and currently has only been able to attend school when her symptoms allow. She has mobility issues and chronic fatigue, and she finds the house difficult to negotiate so spends a lot of time in her room.

Coping with all this is dad Davy – now medically retired – who has a back injury, burning feet syndrome and now problems with his knees.

He is registered as Mandy’s full time carer and a full time dad and carer to the kids.So the entire family are under real stress and the house is making the situation unbearable.

Their home is not wheelchair adapted and it needs to be to future proofed for the entire family before it reaches breaking point and that’s where the kind DIY SOS volunteers step in – to help a deserving family in need.

The build is to reconfigure the entire house, to include disabled friendly bedrooms, a wet-room with direct access for carers.

Widened doors throughout, with a new lift to access the first floor would allow the families wheelchairs to move freely and end the isolation of each family member in their individual bedrooms.

A redesigned and wheelchair friendly kitchen is needed for all and to help Ben, who is keen to learn catering as he needs one to one supervision.

Access to the garden would bring health benefits to the whole family.

The show relies on the generosity of strangers and in April launched an appeal for help, calling upon neighbours, the local community, tradespeople and suppliers to donate their time, space, expertise and products to volunteer.

The response was overwhelming and filming began on Tuesday, with the shoot due to continue until Thursday, June 28.Among those selected to play a part was Airwolf Visual Ltd.

The company specialises in aerial and ground based media production and are fully CAA licensed and insured to complete drone-based operations.

While based in County Armagh, they undertake work throughout the UK.

And Paul said they are delighted to be involved in this popular show as filming concludes on day one on set.

He told Armagh I: “It is DIY SOS’s 20th anniversary year and they chose Northern Ireland for the first time – Bangor in particular as this is where the DIY SOS build manager Mark Millar is from.”

Airwolf Visual were notified of the programme coming to Northern Ireland early in 2019 and we emailed in to offer our services as fully qualified, licensed and insured aerial drone operators.”

And they were thrilled to get the nod!

Said Paul: “We were contacted just this month by the production team and following a series of pre-flight assessments we agreed to provide the aerial media to assist the BBC with the show production.”

It has been one of the most memorable commissions yet for the Airwolf team.

And those behind the scenes – the integral cogs who gel together and keep this televisual wheel rolling year on year – have been fantastic to work with, according to the Richhill man.

Added Paul: “On set, the DIY SOS team are amazing. Every one of them is down to earth, helpful and ensuring all the volunteers are safe and managed.”It is a very professional set-up and one that is needed in order to turn the build around in just nine days.”

For all involved in the show there’s a huge sense of satisfaction and for Paul and Co they share in that glow.

He said: “It is a great cause for a deserving family and we cannot wait to see the family reaction on the reveal day – and to see the final show aired on BBC.”