Three decades of service in Bosnia, Kosovo, Iraq and Afghanistan but fear remains 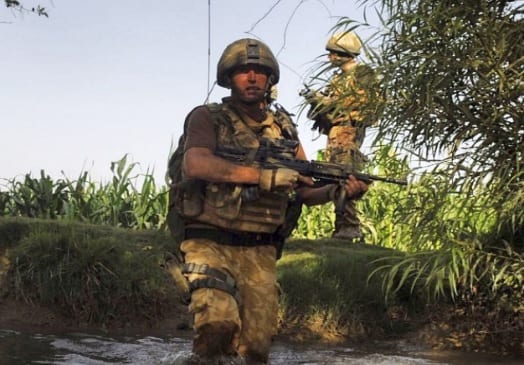 I screamed as the large calibre bullet flew past my face, too fast to see, too quick to dodge, the distinctive cracking noise known only to those who know battle.

Fear. You won’t hear soldiers talk about it. It’s a word suggesting weakness or worse, what they once would have called a lack of moral fibre. But the question is not whether soldiers feel fear – for they do – but how they react to it.

It can be a powerful motivator, allowing you to do things you never thought you were capable of. But fear can also be mentally and physically debilitating, preventing men from carrying out the actions needed for survival.

I have known fear, felt it, saw it in the eyes of my men and in the faces of my enemies. It strikes without warning, not just in the heat of battle but in those quiet reflective moments.

In war there is much to be fearful of: the threat of death and injury, of having seen your family for the last time; of letting down your friends and colleagues, your regiment, your hometown, your country.

I have felt physically sick deploying on a routine patrol, almost debilitated with fear as I watch children and women flee an area we’ve just entered, their dispersal a prelude to attack. But as a commander I must lead by example, it is the loneliest of feelings, the loneliness of command.

With increasing regularity my mind drifts back to winter in Southern Afghanistan were the fighting and killing is done in the open, in mud-heavy fields freshly ploughed and irrigated. There is nowhere to hide, the irrigation ditches that could give cover have been seeded with improvised explosive devices, the bare tree-lines no longer providing cover from view or fire. The mud is everywhere, it clings to your boots like glue and sucks the soldiers’ legs into the saturated terrain

It is a scene and experience that would not be alien to those who served in the Great War.

When the bullets come there is no quick dash to safety, the mud rooting you to the spot. As the enemy engages, the cursing and high-pitched screaming of men starts. But very soon, the training and the adrenaline really do kick in and the job of war truly begins.

The shouts are workmanlike and purposeful, orders are given and information passed. Insurgent positions are identified and fire is returned. For most the fear has been elbowed aside, the controlled violence and frenetic activity offering an escape.

However for some the fear is persistent…

Throughout the UK the media carry stories of heroism as young men and women overcome adversity in the face of the enemy. But where is the glory for the man who has overcome the most incapacitating fear? The one who has – against every instinct – unfurled himself from a foetal position and used his inner strength to haul himself up to face the enemy?

What recognition for the soldier who has lost a colleague in horrifying circumstances and yet the very next day will return to the scene despite uncontrollable vomiting and emotional confusion?

For many men and women on operations the biggest battles every day of every week throughout their deployment are with themselves. Only when those are won can they turn their attentions to the enemy.

Even for me – a soldier of 34 years with service in Bosnia, Kosovo, Iraq and Afghanistan – those battles are still to be won daily, each time harder than the last and well beyond the confines of military service.

But they are never fought alone, they are fought with those who share your experiences – your friends, your colleagues, the men left and right of you when the bullets fly.

On Remembrance Sunday we will stop to remember our war dead in solemn silence, but let’s not forget our war living, for many of them have never left the battlefield.

I screamed as the large calibre bullet flew past my face, too fast to see, too quick to dodge, the distinctive cracking noise known only to those who know battle.

I woke in my bed sweating. For even in sleep and many year after the fear is there.