Despite his ordeal, Kevin McCaffrey, says Colombia is one of the most amazing places on this earth 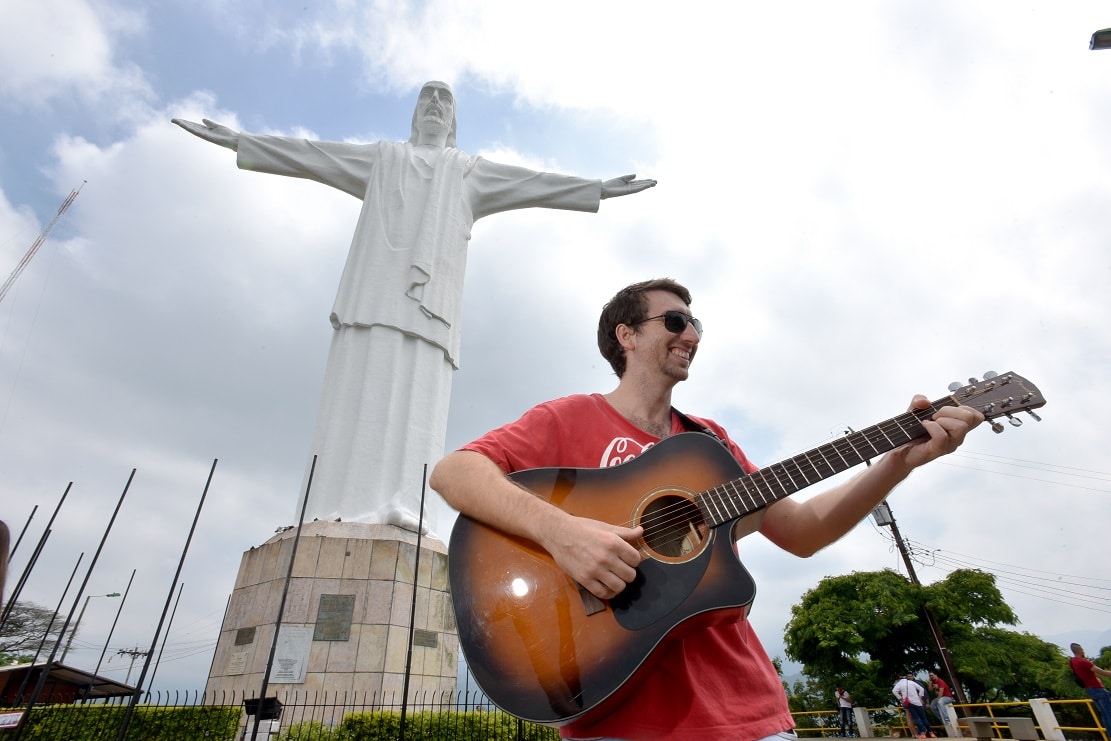 A Portadown man, who has been teaching in Colombia for more than a decade, was unwittingly drugged before having his bank account – years worth of savings – drained in a terrifying ordeal just a few weeks ago.

The substance scopolamine – commonly referred to as the ominously sounding ‘Devil’s Breath’ – is derived from a particular type of tree common to South America, and is reportedly involved in approximately 50,000 cases of poisoning in Colombia each year.

Kevin McCaffrey has called Cali province in Columbia – the Salsa capital – home since 2009, working as an English-speaking teacher at the bilingual school, Colegio Jefferson.

The  recounted his ordeal of being drugged and robbed of 60 millions pesos – ten years of savings – in a video which he shared on social media.

Armagh I caught up with the 34-year-old this week as he recalled the nightmare which took place on October 6.

Kevin was in the historic centre of Cartagena, Colombia – in the north of the country – having a drink with his friend when, shortly after 9pm, they were approached by a couple of women who they struck up a conversation with.

Before leaving, Kevin was asked by one of the ladies if he would like to meet up again, and numbers were exchanged. He, along with his friend, then returned to their hotel

After messaging back and forth with the girl, Kevin decided to invite her for dinner at the hotel the next evening before a walk in the historic Cartagena centre.

However, Kevin explained, when she arrived she did not have the right form of identification and so was refused entry to the hotel. So the pair took that walk as the sun began to set and stopped at a very popular site for tourists. It was around 6.30pm.

They sat on a bench and grabbed a drink from a street vendor, and after about ten minutes of chatting, the lady said she recognised a friend, who was invited to join.

Five more minutes and that is the last thing Kevin can remember of the night.

Hours passed and the next thing Kevin recalls is feeling “disorientated, dizzy, and nauseous” in the back of a taxi near his hotel.

The driver was agitated, stating Kevin had been drugged and was demanding to be paid, having been driving round most of the night.

Fortunately for the Co. Armagh native, he located some money in his hotel room to pay the fare, as his phone, cards and cash from his wallet had vanished.

He collapsed and slept through the night. When he awoke in the morning he checked his bank balance and noted multiple transactions totalling 60 million pesos, around £12,500.

Kevin rushed to the bank but was told there was nothing they could do; they accepted that this had been fraudulent but could offer nothing to help.

Speaking to Armagh I, Kevin said, despite the trauma of it all “it has been an amazing experience living here”.

“I would like to make it as a clear as possible and highlight how amazing Colombia is,” he continued.

“The people here are so incredible friendly; the landscapes are absolutely stunning. Before I came to Latin America, I always dreamed of going to two places, the Amazon, and the Galapagos.”

Those dreams have turned into reality as Kevin has in the last decade travelled to the Galapagos and has visited the Amazon on six different occasions.

He reiterated that this event has not put his off the country, which he described as an beautiful place both to live and travel, and one he would recommend without a second thought.

“Unfortunately, people have seen the series Narcos,” said Kevin. “They know of the history of Colombia and the drug trade, so the country does not get a lot of positive press.

“That was never my intention in releasing my story; I did it to help other people. I don’t feel bitter about what happened or towards those who were involved, it is a problem with organised crime.”

Explaining his knowledge of ‘Devil’s Breath’, Kevin said: “It is a really crazy drug; it actually comes from a really beautiful flower.

“It grows in the streets here. I was aware of it before, but I all I knew was that it was a drug which was used to rob people. I knew it made you lose your senses but I didn’t know the actual properties.”

According to Kevin, the drug resembles cocaine as it can be administered by being put into a drink or even just blown into your face – it acts within minutes.

“Whenever you are under it, you will do literally anything someone tells you, with a smile on your face,” he added. “To the onlooker you will appear totally fine.

“You lose all memory of the event, generally sort of between five and six hours; the other thing is it doesn’t stay in your system for very long.”

Since initially sharing his story on social media, Kevin has been overwhelmed by the support he has received and messages from others who have similar experiences.

“It’s commonly used, when people have an unattended drink in a club, that type of thing. But in my case I was sober at 6.30pm in the middle of the day in a public place.

For Kevin, the reason stories are not heard that often is because it can be a traumatic and embarrassing experience, however, he says he has nothing to be afraid of.

“I was a victim of it in the middle of the day and in a public place, when I was recalling the incident I just thought there is nothing else it could be, it had all of the properties.

“Incredibly, I found that some of my friends have also been victims. I have since been told stories from all over Colombia and the world and my story has had a lot of attention.”

Kevin has been contacted and told of many horror stories from others.

Determined to make this a positive learning experience, Kevin said he feels his story has already served its purpose, “because I know from the response that people are going to be more vigilant”.

He added: “Since the incident, I feel more thankful and appreciative of every single thing I have, you know, in terms of friends, family, material things, because whenever something like this happens it does makes you think.”

Kevin said he made the conscious decision not to become angry or bitter about the incident but was initially anxious and weary about sharing his story.

“You’re opening yourself up to people obviously pointing the finger, so that was always in the back of my mind. I was a bit apprehensive.

“But then a couple of my friends said look, if you really  up for it. You’re going to help a lot of people by doing it.”