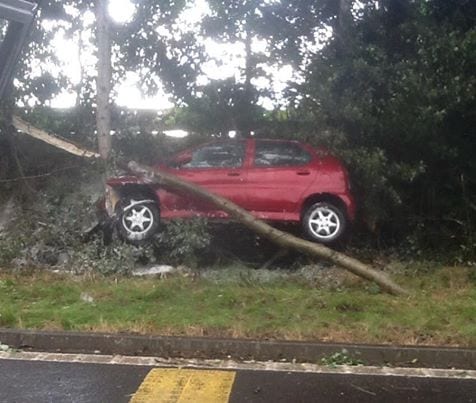 Police have praised the community spirit which came to the fore after a road traffic collision in Portadown.

An elderly motorist had a lucky escape after the rtc, which happened on the Portadown off-slip of the M1.

The car left the road and ended up in the hedgerow.

But it was what happened next which has led to the PSNI to praise the “selfless” actions of those passing by.

Ladies at the scene also worked together to lift a tree from the man’s car.

The PSNI shared a picture from the scene and hailed those who helped.

“It was a wonderful sight pulling up in our police car and seeing so many people already out and helping the elderly male involved including an off duty doctor,” the PSNI in Craigavon posted on Facebook.

“As you can see from the photo the driver had a very lucky escape.

“Please be careful on the roads especially when they are wet and if your feeling tired or ill, please pull over and take a break.”