Mother and son due to undergo procedure in Belfast this afternoon 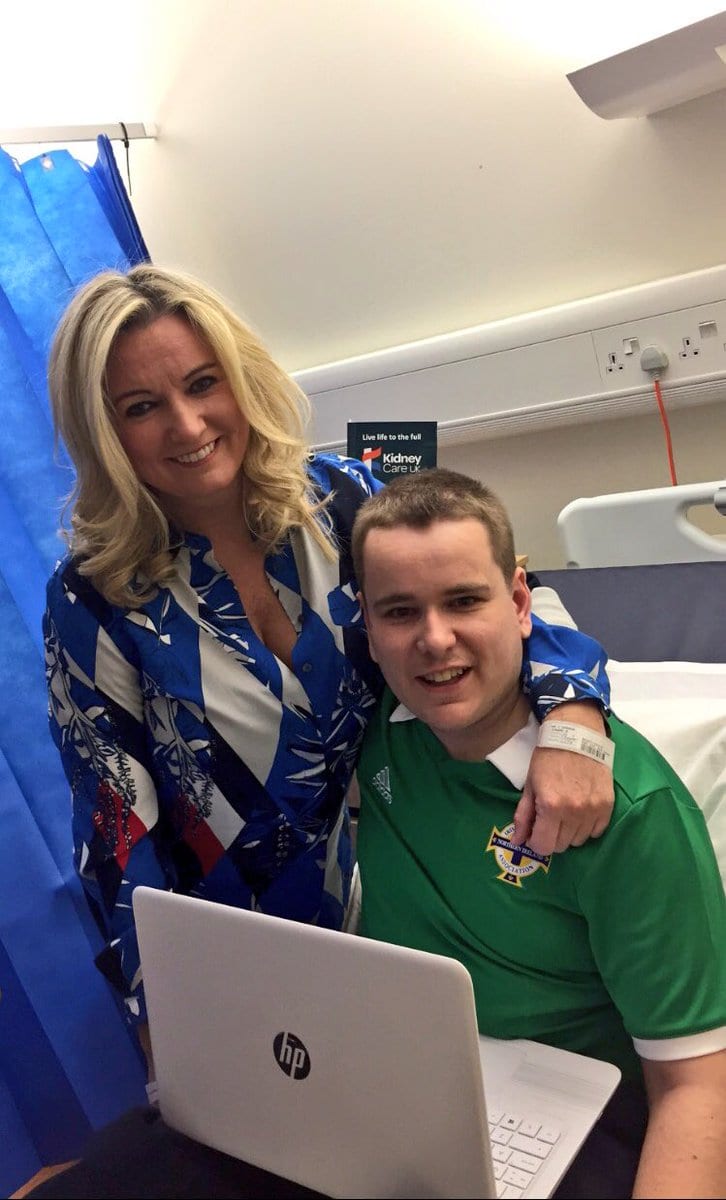 Jo-Anne Dobson tweeted a picture of she and Mark as they prepared for surgery.

A Co Armagh mother is undergoing surgery today to donate a kidney to her beloved son – the ultimate gift of life through love.

She has been committed to the cause because of her son, Mark, who was diagnosed with renal reflux at just five weeks old.

It meant that one of his kidneys only had 19 per cent function.

In 2009, brave Mark underwent a kidney transplant at the Royal Belfast Hospital for Sick Children, thanks to a donor being found.

But devastatingly his new kindney began to ‘shut down’ and had to be removed in August last year,  meaning Mark going back on dialysis.

Now mum Jo-Anne is donating one of her own kidneys to her son.

They have tweeted about the life-changing surgery which they are undergoing today (Tuesday).

As they spent last night in Belfast City Hospital, Jo-Anne tweeted that it was “an emotional night for us”, as they awaited the procedure today, and “a new day dawns & Mark receives new life from me for a 2nd time as I donate a kidney to him”.

She said she and Mark would be placing “our lives in the hands of a hero!”.

Mark – a huge Northern Ireland football fan – tweeted that he was looking out over Windsor Park as he waited to be taken to theatre.

And he thanked mum Jo-Anne for her courageous decision – and well-wishers for their support.

“LOVE you Mum, you are making my dreams come true this morning! XX Mum’s just gone down to surgery to donate a kidney to me – I’m heading down around lunchtime! Thanks for all the lovely messages of support,” he tweeted.

Among those people who have been rushing to offer their support was veteran Sky news journalist David Blevins, who tweeted: “If you thought standing for election was the most courageous thing @JoAnne_Dobson ever did, think again. Let’s send her and Mark our best, regardless of your politics.”

Writer and broadcaster Mike Philpott tweeted: “I salute the courage of both you and Mark. Love to you both x”

All at Armagh I would like to add our own best wishes to Jo-Anne and Mark for a successful procedure and a full and speedy path to good health.