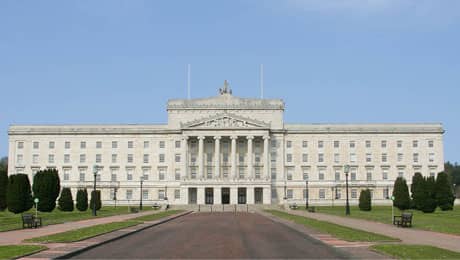 The Northern Ireland Executive’s 12 departments is to be reduced to just nine – and the number of MLAs sitting at Stormont will also be cut back.

Currently there are 108 MLAs across all 18 constituencies here.

But the plan is to be reduce this to just five for each constituency.

It is just one of the measures agreed upon in a deal brokered after 10 weeks of intensive negotiations to get the political process here back on track.

It aims to tackle issues surrounding paramilitarism and also sets a way forward on the divisive issue of welfare reform.

An international body will be established and funded with a £3.2 million budget to monitor paramilitary activity.

A cross-border task force will also be established.

A tri-lateral cross-border Ministerial meeting will take place in December 2015, involving the UK Government, the Irish Government and the Northern Ireland Executive.

It will agree new measures to enhance law enforcement co-operation aimed at tackling organised crime and criminality, including that linked to paramilitarism.

In a concerted and enhanced effort to tackle cross-border organised crime – and to bring to justice those involved in it – the Joint Agency Task Force will be established, led by senior officers from the PSNI, An Garda Síochána, the Revenue Commissioners and HM Revenue and Customs.

It will operate on a budget of around £50 million.

The PSNI, meanwhile, will also get an extra £160 million over the next five year period.

There has been no agreement on legacy issues on dealing with the past, however.

From May 2016, the new Agreement says this will provide better co-ordinated and more efficient services.

A Bill to reduce the number of MLAs to five per constituency will be introduced into the Assembly and will have effect from the first Assembly election after May 2016.

The Welfare Bill will be debated and approved by the Assembly by way of a Legislative Consent Motion no later than next week.

The Executive has agreed to allocate a total of £585 million from Executive funds over four years to ‘top-up’ the UK welfare arrangements in Northern Ireland, with a review in 2018-19. This sum incorporates the present discretionary fund.

In terms of infrastructure, a number of key developments feature.

The Northern Ireland Executive and the Irish Government have agreed to undertake a review with a view to identifying options for jointly developing future phases of the Ulster Canal restoration project, for consideration by the North South Ministerial Council in June 2016.

The Irish Government also says it remains committed to the concept of the Narrow Water Bridge, which would provide a valuable North-South link between counties Louth and Down, with potential to provide jobs and a significant boost to tourism in the area.

The Northern Ireland Executive and the Irish Government would agree to undertake a review of the project with a view to identifying options for its future development, for consideration by the North South Ministerial Council in June 2016.

While Sinn Fein and the DUP have signed up to the deal, backed by the British and Irish Governments, other parties have yet to.

But the two largest parties believe it is the way ahead.

First Minister Peter Robinson said: “After many months of discussion and many difficulties along the way we are publishing the agreement entitled ‘A Fresh Start – The Stormont Agreement and Implementation Plan.’

“At the heart of this agreement is a desire to build a better Northern Ireland for all our citizens. We set out further steps to develop our economy, support those most vulnerable, assist working people and build on the political progress to date. The decision to reduce our Corporation Tax rate from April 2018 to 12.5% will act as a game changer in our efforts to grow the Northern Ireland economy.

“The additional half billion financial package will allow us to protect front-line services ensuring we become efficient in how we deliver for the public.

“Today represents another milestone along the way as we normalise and build our society. The agreements and plans we set out represent our desire to overcome the difficulties of the last number of years. We must ensure through co-operation and common purpose the spirit, vision and promise of the document is fulfilled.”

The Deputy First Minister Martin McGuinness said: “At the heart of this agreement is our common commitment to a better future. We have secured more than half a billion additional funding for the Executive plus flexibilities that can be invested in growth and public services.

“We have agreed a package of £585million to support the most vulnerable in society and low income working families.

“We also addressed directly the issue of paramilitarism. There can be no place for armed groups in our society. That is why the agreement includes additional resources for policing and mechanisms to challenge armed gangs and criminality.

“Our political institutions are the best way to ensure we can protect our people. This agreement offers a new beginning, a new way of working, a new era. The opportunity is there for everyone to work together and turn the vision of this agreement into a reality.”