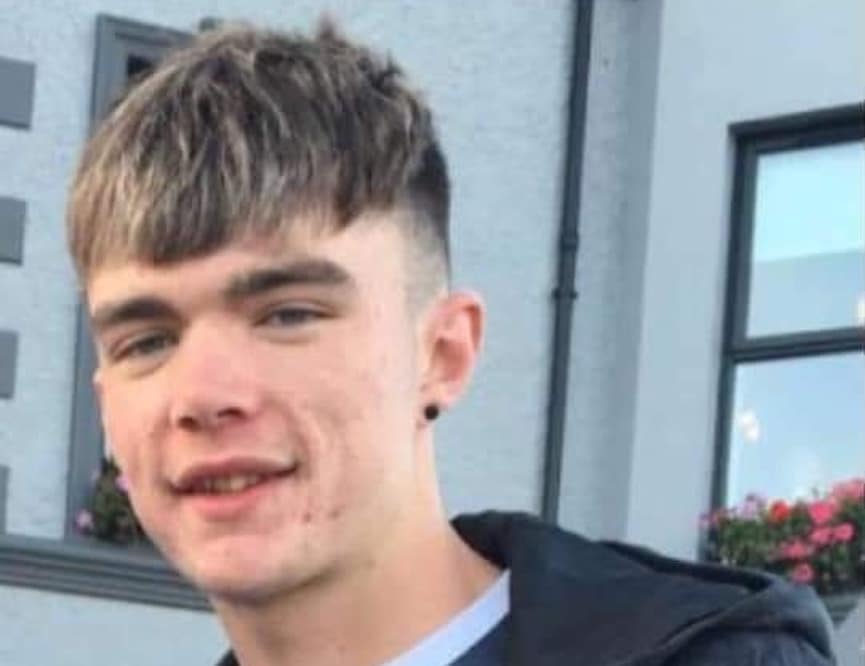 A Warrenpoint teenager who sadly passed away less than a year after he was involved in a road traffic collision which claimed the life of his friend will be forever remembered as “someone who loved people and lived life to the full”.

Richard Weir was one of five people travelling in a car which crashed on the Hilltown Road in Kilcoo last October.

He suffered catastrophic injuries while the collision claimed the life of 18-year-old Dawid Blenski.

Richard’s family had recently set up a GoFundMe page for their son in a bid to transform his home to allow for it to be adapted to his complex needs for when he returned home from hospital.

Unfortunately that was not to be the case.

As chronicled by his dad in the GoFundMe page, Richard had remained in a vegetative state since November, despite earlier promise and movement.

Richard’s brave battle for life came to an end on Monday morning.

At the Requiem Mass in St Peter’s Church in Warrenpoint today (Thursday), Canon John Kearney said: “Fewer burdens are heavier that the coffin of your son, your brother or your best friend on your shoulder.

“Our hearts go out today to Richard’s family and to the friends who shared the adventure of his young manhood. We grieve today that a light full of promise seems to have been cut short.”

He proclaimed: “By beginning with the word life, we think of a young man brimming over with irrepressible energy, with promise, with laughter. He was someone who never lost the capacity to surprise us, he was never predictable.

“God has taken him to Himself at a time when he was most full of life. He will be forever fixed in our memory, and in our hearts, as someone who loved people and lived life to the full.

“That may be his parting gift to us. A reminder that life is exuberant and ever youthful. If it is eternal, then it will be ever new, ever full of surprises bursting with promise that there is more to come.”

Reflecting on the young man’s education, Canon Kearney added: “Richard went to school in St Dallan’s and then on to St Mark’s and then to the Southern Regional College in Newry for a few short weeks.

“He is well remembered by fellow pupils and teachers. One of the things that teachers both in St Mark’s and St Dallan’s would have said about him was that no matter where you met him he always would say a word, and deep down, I do think he appreciated what the teachers had done for him, during his years in education here in Warrenpoint.”

The clergyman commented that Richard loved his style and would never leave the house without having a “generous helping of Lynx”.

“In St Mark’s, pupils are expected to have the full uniform each day, and rightly so, and they always looked well, a credit to their school and the community,” he said.

“But this was the rung on which Richard perished. The uniform, more or less. Yes. His mother Yvonne tried her best to send him out in order, each day.

“Dark socks. No, Richard wore white socks and invariably Mrs McNulty would meet him and all she had to say was, Richard!”

He continued: “Indeed it’s strange but Mrs McNulty, I think, was the last teacher to talk to him one day in the shopping centre in Newry. I don’t think she bothered about the colour of his socks that day.

“He had celebrated his birthday on the 26th of October, Dawid, Finnon, Cara and Sophie and themselves were travelling between Kilcoo and Hilltown.

“When they were involved in an accident Dawid died at the scene. Richard went to hospital and Sophie and Cara and Finnon have recovered, and we welcome them with us today.

Canon Kearney paid tribute to those who had shown their  support in the days and times following the accident,

He said “I think of the evening we gathered here in St Peter’s in prayer and support of families who have been tragically bereaved. And we do the same today, many people in the community have supported the families since then.

“I think of Micheal Magill, the Canal Court in Newry, who came together and brought many bands from all over the North in support of families at this difficult time.

“We think of Mrs McNulty and the entire staff of St Mark’s for the sensitivity, and the care that they brought to the families, and their pupils in such a tragic situation.

“And I know Richard’s family are ever grateful to you all, and they are eternally grateful to the doctors, nurses and staff, first of all, in the Royal Victoria, in Belfast, for the tremendous care that they gave to Richard, and in recent months in Musgrave Park Hospital in Belfast.”

Finally, Canon Kearney told mourners: “Today, we come in tribute to Richard’s parents, for the love and the care that they have given him all through his life, but particularly during his days in hospital.

“My work as a priest obviously in the parish brings me to hospital many times. And I have to say that every time I visited Richard, his family were always at his bedside.

“For sure they will miss him and as you look back down the years from this day, you will have your own memories special to you alone, but you have done your best.

“You have put your lives on hold, since the accident. You need have no regrets. On this day, we stand in silent admiration of all of you, his family.”