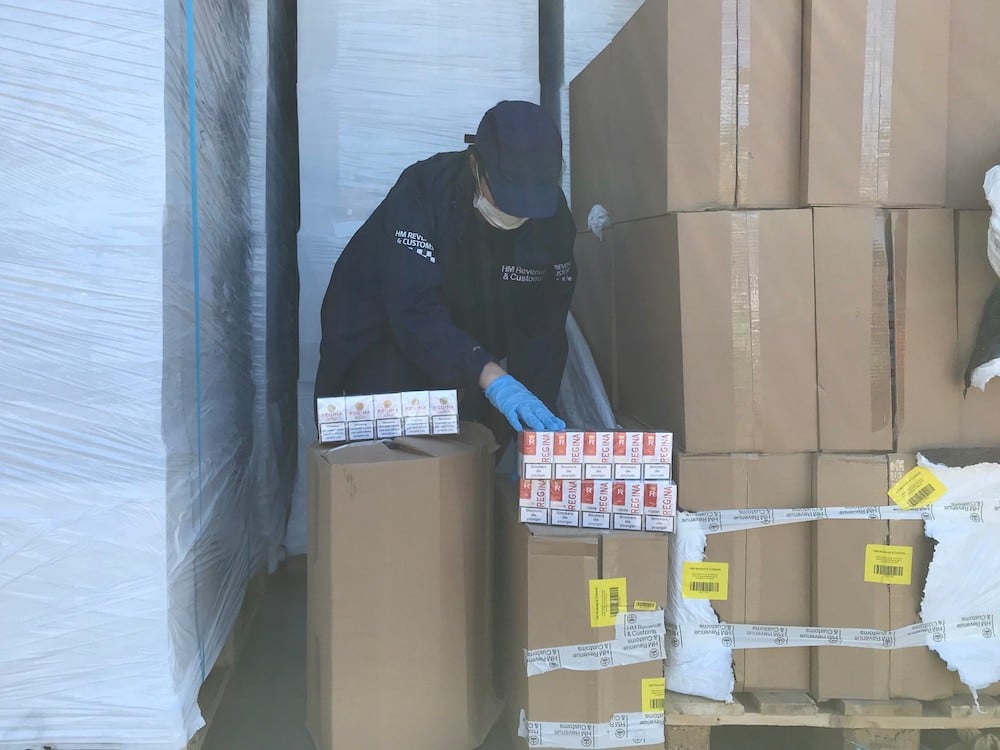 Two men who were arrested following a joint HMRC and PSNI investigation which led to the seizure of eight million illicit cigarettes in south Armagh have been granted bail.

Lisburn Magistrates’ Court heard on Monday that follow-up searches by An Garda Síochána at an address linked to one defendant had allegedly led to the uncovering of thousands of duty stamps and approximately two and a half tonnes of hand rolling tobacco.

Gavin McCloskey, 34, of Bush Riverstown, Dundalk, and Brian Ruddy, 37, of Castle Hill, Carlingford, both appeared at court via videolink, charged with fraudulent evasion of excise duty.

Giving evidence to the court, a PSNI constable said he believed he could connect each man to the offences while Officer McShane from HMRC said she was objecting to the men being released on bail.

The court heard the charges arose from a joint PSNI and HMRC operation at a yard in the Newry area on Saturday.

During this officers searched a lorry and uncovered the eight million cigarettes, said to be worth an estimated £3m in lost taxes and duties.

Follow on searches carried out by An Garda Síochána at an address allegedly linked to Ruddy, thousands of duty stamps and approximately two and a half tonnes of hand rolling tobacco were uncovered.

Officer McShane from HMRC, said it was not clear who was the driver of the lorry but that both men were apprehended at the scene.

She alleged they had been in the midst of unloading the illicit cigarettes into a shed at the yard, when police and HMRC attended.

During interview, it was heard that McCloskey made no comment other than to say he had a lawful reason to be present at the scene but would not explain what this was.

In a second interview, he was asked again why he had been at the yard, to which he replied: “I don’t want to get into that.”

Officer McShane stated bail was objected to as an address in the Republic of Ireland had been put forward which led to a fear of risk of flight.

She also believed there was a risk of further offences with the defendant seeking to recoup the losses.

Court heard McCloskey had a previous conviction for fraud in 2018 which occurred in Jonesborough for which he received a six month sentence suspended for two years.

Defence barrister Michael Chambers, who represented McCloskey, stated that the officer from HMRC had been given no background on the intelligence in the case.

He stated: “There is no other evidence which shows that Mr McCloskey was doing anything other than unloading.”

Mr Chambers added that a third co-accused had been released on police bail since the incident.

Officer McShane stated that this had been the case as an address in Northern Ireland had been put forward.

Mr Chambers said that an address in Kilkeel had been put forward but as of yet had not been checked.

A short break was taken, and during this the address was subsequently checked and agreed.

District Judge Amanda Brady stated: “I am minded to grant bail given that this investigation is in its infancy and a third co-accused has been released on bail to an address in this jurisdiction.”

McCloskey was freed on his own bail of £500 to reside at the address in Kilkeel, with his sister offering a surety of £10,000.

Conditions attached included a curfew from midnight until 6am and he is to sign with police once a week.

Similarly defence barrister David McKeown, who represented Ruddy, stated that a £5,000 cash surety had been offered by his client, along with an address in Newry.

He too was released on bail with the same terms.

Both cases were adjourned to Newry Magistrates’ Court, sitting on June 24.