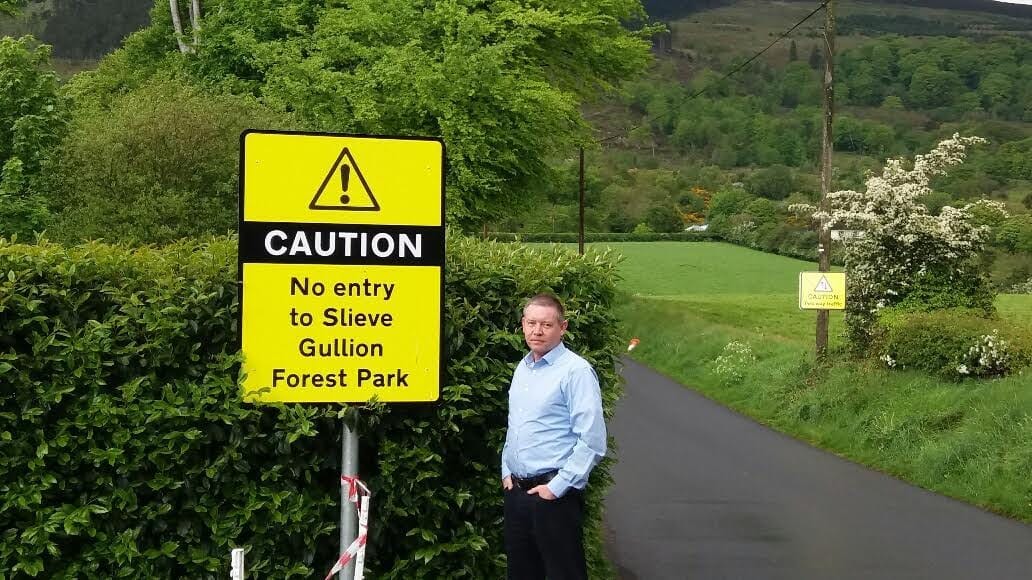 Councillor Mickey Larkin at one of the newly-erected signs

Efforts are being made to resolve parking issues which are proving a real nightmare for residents living near Slieve Gullion.

Like Gosford Forest Park outside Markethill, the Bank Holiday and warm weather has seen an increase in visitors.

And it has also brought with it problems around Slieve Gullion.

But this time it is not dodging the entrance fee, but confusion over roads which has been at the core of the problem.

Sinn Féin Councillor Mickey Larkin said he had raised issues concerning access to and from the Wood with Newry, Mourne and Down District Council.

And now he has welcomed the response.

“Over the recent Bank Holiday weekend residents found themselves either trapped in their homes or unable to return due to the vast number of visitors to Slieve Gullion,” explained Councillor Larkin.

“Cars were parked in a haphazard fashion along the Wood Road blocking field gates and driveways.

“Visitors believed that it was still part of the one way system and residents endured consistent blockages in their attempts to get home.

“I raised a number of issues with the Council, the PSNI and Transport NI in an attempt to ease the traffic problems caused by increase in tourism at Slieve Gullion.

“The council has put in place signs informing visitors of two-way traffic, new exit signs, direction signs for Newry and signs warning of no access through Wood Road.

“Staff have been placed to guide and advise visitors on leaving the site and cones placed to discourage parking.

“Along with 80 temporary parking places on site more are planned.

“The PSNI have assured me that they will monitor traffic flow and I will be liaising with Transport NI in relation to this.

“As the council continues to develop this site along with links to the Killeavy Castle project, it will be necessary to take on board the concerns of local residents to ensure that enhancing the visitor experience also has a positive effect on the lives of those who live here.”