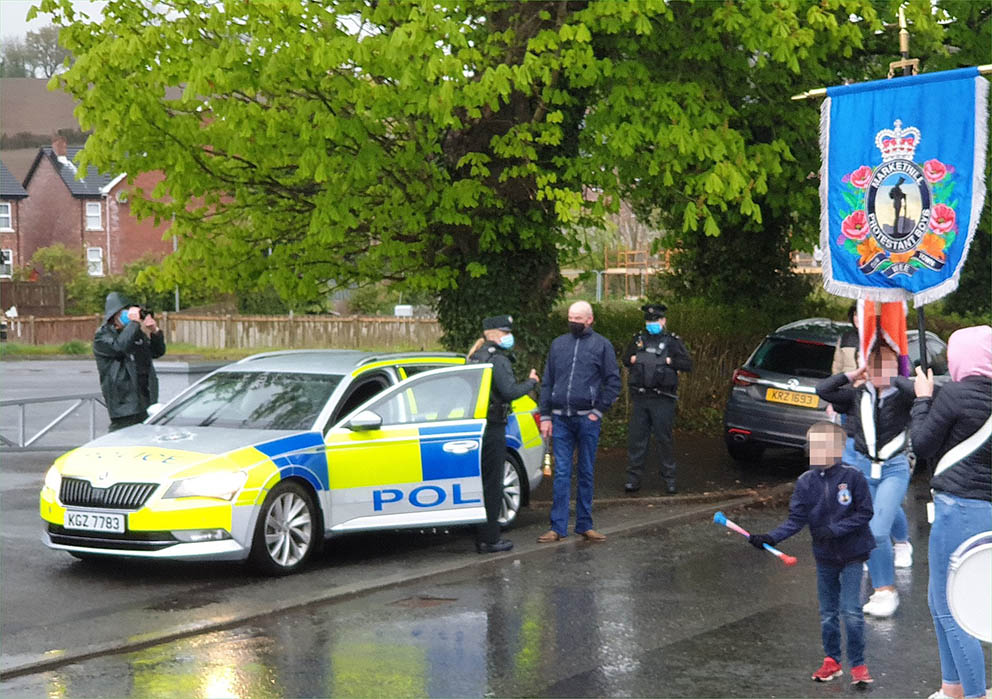 A large-scale police presence at a parade in Markethill – celebrating 100 years of Northern Ireland – has been branded “deeply disturbing” and “disproportionate”.

Markethill District LOL hit at both the PSNI for their ‘intimidatory’ approach to overseeing proceedings through the town on Monday night, and the Parades Commission who deemed the legally-notified event as “sensitive”.

As a result, a determination (restrictions or conditions) was subsequently issued and acted upon by police.

A spokesperson for the Lodge said that while the streets were lined with cars, smiles on faces with the band playing excellently, the evening was marred by police surveillance.

“This is Markethill. This is one of the most band and loyal order orientated towns in Northern Ireland, if not most,” said the Lodge spokesperson.

“Never before in history has there been trouble or controversy surrounding a procession in this town. Yet it was marked sensitive by the Parades Commission! The determination issued was devoid of conditions or restrictions, but nonetheless it was a determination.

“The Parades Commission received no representations from any statutory or private organisation or individual, and does not have the power to reference any health legislation when making judgements. The Parades Commission must answer why they are negatively labelling and stigmatising a group of law-abiding men, women and children.

“This is one marching band. A highly respected marching band, who has never been involved in any illegality or even accused of same.

The Lodge claimed several police officers began to gather around the band – “the ultimate model and good example for social distancing” – with three police cameramen / videographers focussing directly on the band.

The spokesperson added: “As they formed to start parading, a loudspeaker rang out directly at the side of the band. They were informed that they must disperse. As they moved off, several PSNI cameramen followed the parade akin to the ‘blocks’ of soldiers some will remember from past bad days.

“One PSNI cameraman continued to take images/ video for about half of the procession. If that were not intimidating enough, it was observed that there were at least, at least, eight marked police vehicles present in and in the vicinity of the town.

The spokesperson continued: “To have this single band of young men, women and children videoed and photographed in what many would consider as an overtly intimidatory manner, is worrying enough, but to have eight police vehicles present for an event of a few dozen people is blatantly disproportionate. What possible reasoning and justification can be given for such an approach?

“These issues need immediately addressed. Our political representatives locally and beyond need to make representation now and get questions asked.

“All efforts to get the PSNI to officially detail the restrictions upon legally notified parades and the related legislation in advance, have been ignored. We are in the situation that so-called ‘illegal’ protests are not permitted, travelling with legal events not being permitted! For any outsider it would appear that these exercises are not about the law or health.

“To any outsider it would appear we are in the midst of an attempt to ensure Unionism and Loyalism voices are silenced..”

Newry & Armagh DUP MLA William Irwin stated: “This is obviously a very sensitive issue and the current Covid-19 restrictions are a real challenge for everyone in Northern Ireland across many sectors.

“The fact that the fall-out from the Bobby Storey funeral continues, with stark differences in approaches, the out-workings of what would be in normal circumstances a straightforward band parade is causing concerns to simmer significantly.”

He added: “With this firmly in mind, I will be meeting with the local PSNI senior representatives to discuss these concerns directly and try and establish a way forward given the community tensions that exist.”