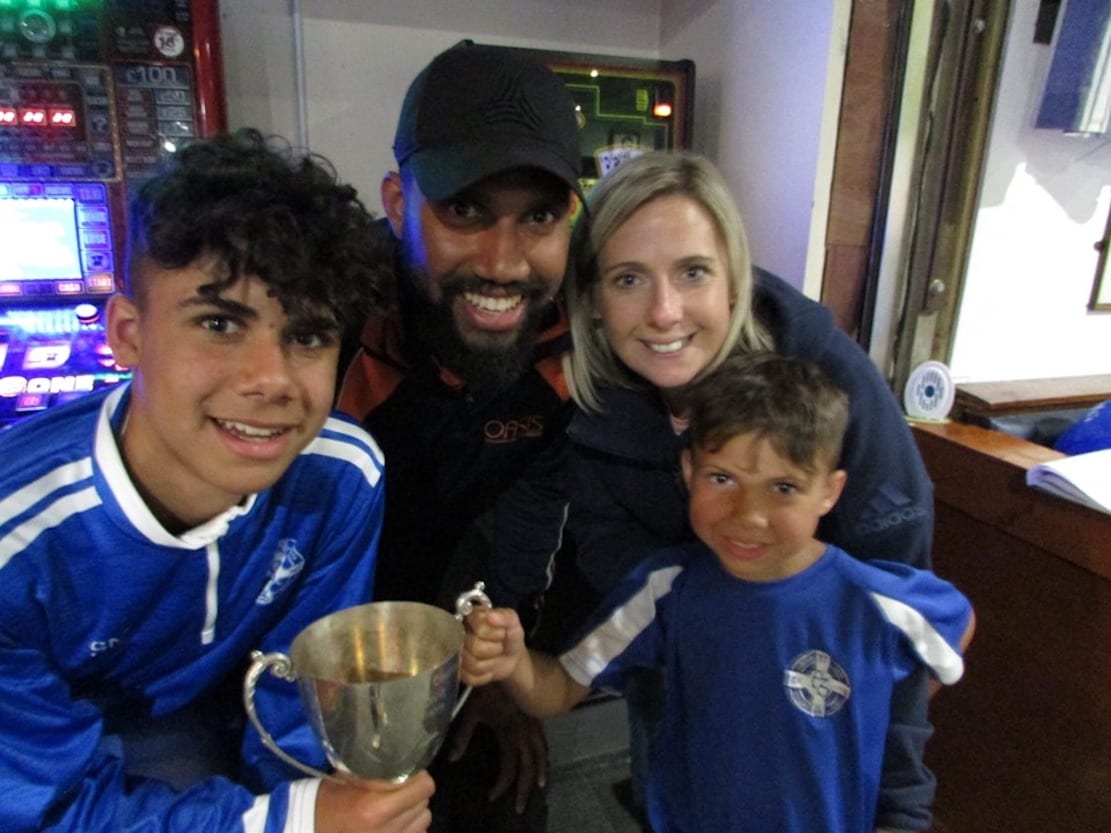 Tuda Murphy with his wife Nadine, sons Shay and Luca

Tuda Murphy turned 39 this week and it could be a double celebration should Clan Na Gael’s under 16 side make history this weekend.

The Lurgan side are hoping to win the Ulster title on Sunday against Burren of Co. Down in the final of the prestigious Paul McGirr Cup.

The former Cayman Islands international goalkeeper, who had spells at Donegal Celtic, Portadown and 59 appearances for Glenavon in the Irish League, will be keeping a special eye on his son Shay who will be in goals for the Lurgan blues in the Provincial decider.

When Tuda says he wants to play for his country, he is referring to the newly formed GAA team back home.

“I have just found out that the Cayman Islands have formed a Gaelic team,” commented Tuda. “I would love to play for them, but for the moment my focus is with the Clans,” who he described as “a brilliant club”.

Young Shay Murphy, who has another three years playing for the Clan’s Under 16s has played a huge part in his club’s success to date, including an all-county Feile and Under 16 title.

His dad Tuda is delighted with his progress.

He said: “To be honest, when he first played for the under 16’s I was a bit concerned, there are some big lads who are in their final year, but he has adapted well and loves the game; he is also with Portadown, but with the Gaelic season still going he has committed to Clan Na Gael.”

Looking for a Cayman Island’s Gaelic jersey was a bit of a task, suggested Tuda.

“When I found out there was a new Gaelic team back home I began the hunt for a jersey; thankfully O’Neill’s were able to help, but now both Shay, and my other son Luca, are looking jerseys which has added to the expense,” he mused.

Looking beyond next weekend Tuda, who feels totally at home at Davitt Park, said: “I don’t think I could coach the game; there are a lot of rules to catch up on, but you never know about the Clan’s B’s (reserves) as he describes them, I could possibly do a job for them , even at my age, so we will see what next season brings.”

Being over 4,500 miles from his home country isn’t a problem for Clan Na Gael’s adopted son, who said: “With my wife Nadine and the boys we all love the Clans; the team managers have the lads in superb form at the moment, but in a final anything can happen, even when you are underdogs.

“To be honest I can’t wait, our boys love the game, so we can expect a huge crowd turning out to support the lads on Sunday”.

The Lurgan blues will be contesting their first Ulster final since 1992, when Barry O’Hagan and Diarmuid Marsden lined out in an Ulster minor final.