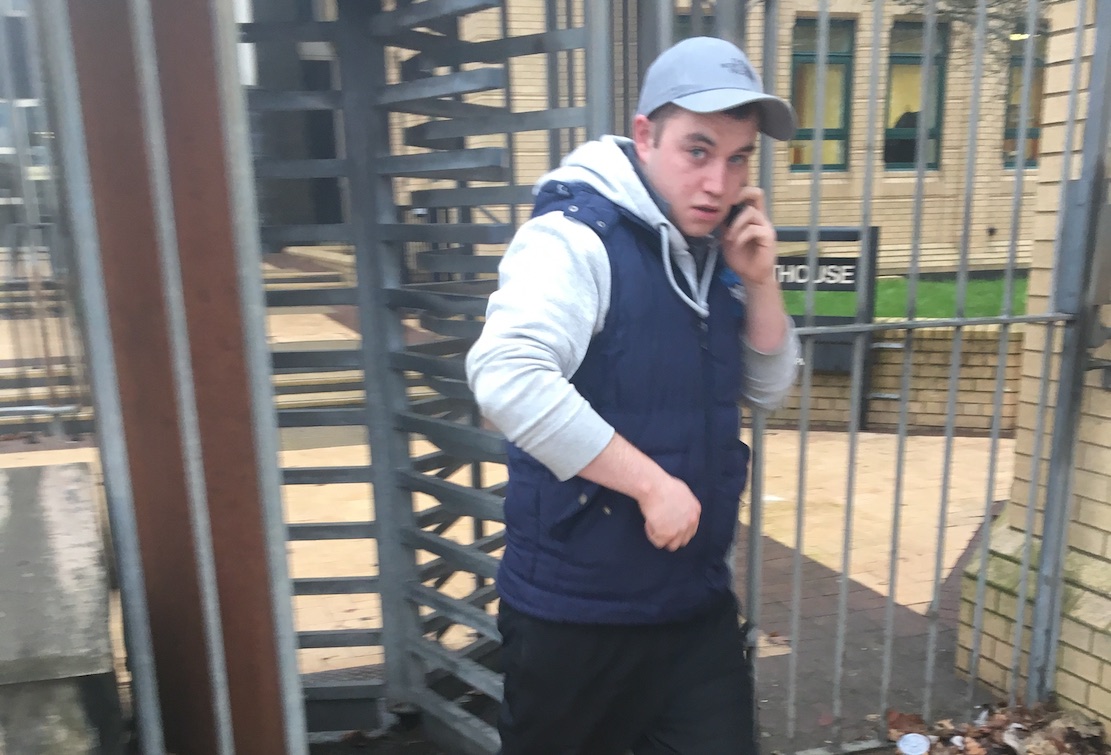 Court heard that the 24-year-old’s DNA was found on a latex glove just 17 metres from a burnt out car believed to have been used in the murder.

Jake O’Brien, of Rectory Road, appeared charged with murder at Craigavon Magistrates’ on Friday, via videolink from Maghaberry.

CCTV from the scene identified a blue Volkswagen Passat – which had been stolen from the Republic of Ireland in February – in the area at the time of the murder.

Further CCTV from Green Hill Park in Lurgan, showed a male get out of a green Volkswagen Golf, which was registered to the defendant, before getting into a dark car believed to be a Passat at around 5pm.

The vehicle remained there and is only seen leaving on CCTV at 7.20pm following the gunshots.

A black latex glove found at the scene had proved a positive match to O’Brien – the co-accused.

Speaking on Friday, a constable stated that expert ballistic analysis was due at the end of the month, with other forensic reports still outstanding.

He said he had met with the prosecution to discuss further lines of inquiry.

The file was also awaiting CCTV expert analysis from England which related to the identification of vehicles and persons.

Outlining objections, the constable stated: “Mr O’Brien was on court bail for drugs, and was also on licence, at the time of the alleged offence.

“This is crime is serious and the risk of him fleeing is always a possibility as it is not know when the the full facts will be known”.

He continued: “The is also the risk of interference with witnesses, Lurgan is a small area, it is very possible either he or his associates would know those who gave statements.

“There is a risk to others, this was part of a long running feud between rival gangs, firearms have been brought on to the streets and these have never been recovered”.

The constable also stated there was a fear that O’Brien would pervert the course of justice as the Golf used and owned by the co-accused had yet to be recovered.

Defence barrister Michael Forde said: “Both of his parents reside in Northern Ireland, his five sisters reside here and prior to his arrest he had been working as a tyre fitter.

“You say this was a gang feud, no witnesses have been intimidated since last August, you have no evidence to substantiate that this defendant would interfere with witnesses”.

“We have provided an address outside the Lurgan area but I understand you have not had the chance to speak to the gentleman who lives there”.

The constable commented that the address had only been given to him that morning and was different from the one he had previously discussed with the prosecution service.

Mr Forde stated that his client would take no issue with curfews and electronic tagging conditions.

The constable said: “If he were to have bail granted we would like conditions including tagging, a curfew and signing three times a week”.

Mr Forde commented that there were no eye witnesses or CCTV to place the defendant at the scene, there was no DNA placing him there either.

He also established that O’Brien had no been positively identified at the scene of the burnt out Passat believed to have been involved in the murder.

The constable stated that the defendant had been picked out by four officers on CCTV which showed two men making their way to the alleged getaway car.

He also said that latex gloves found just 17 metres away from the burnt out car had tested positive for O’Brien’s DNA.

Mr Forde stated: “He worked as a tyre fitter and said that he used up to 50 latex gloves a week”.

He finished by saying the family of the defendant were willing to put up a cash surety of £2,000.

District Judge Steven Keown said: “The police believe he is connected to the most serious charge a person can face, this is still an ongoing investigation.

“He does have somewhat of a significant record and I believe the risk of reoffending is too great.”

Bail was refused, O’Brien was remanded in custody to appear via videolink on February 7.