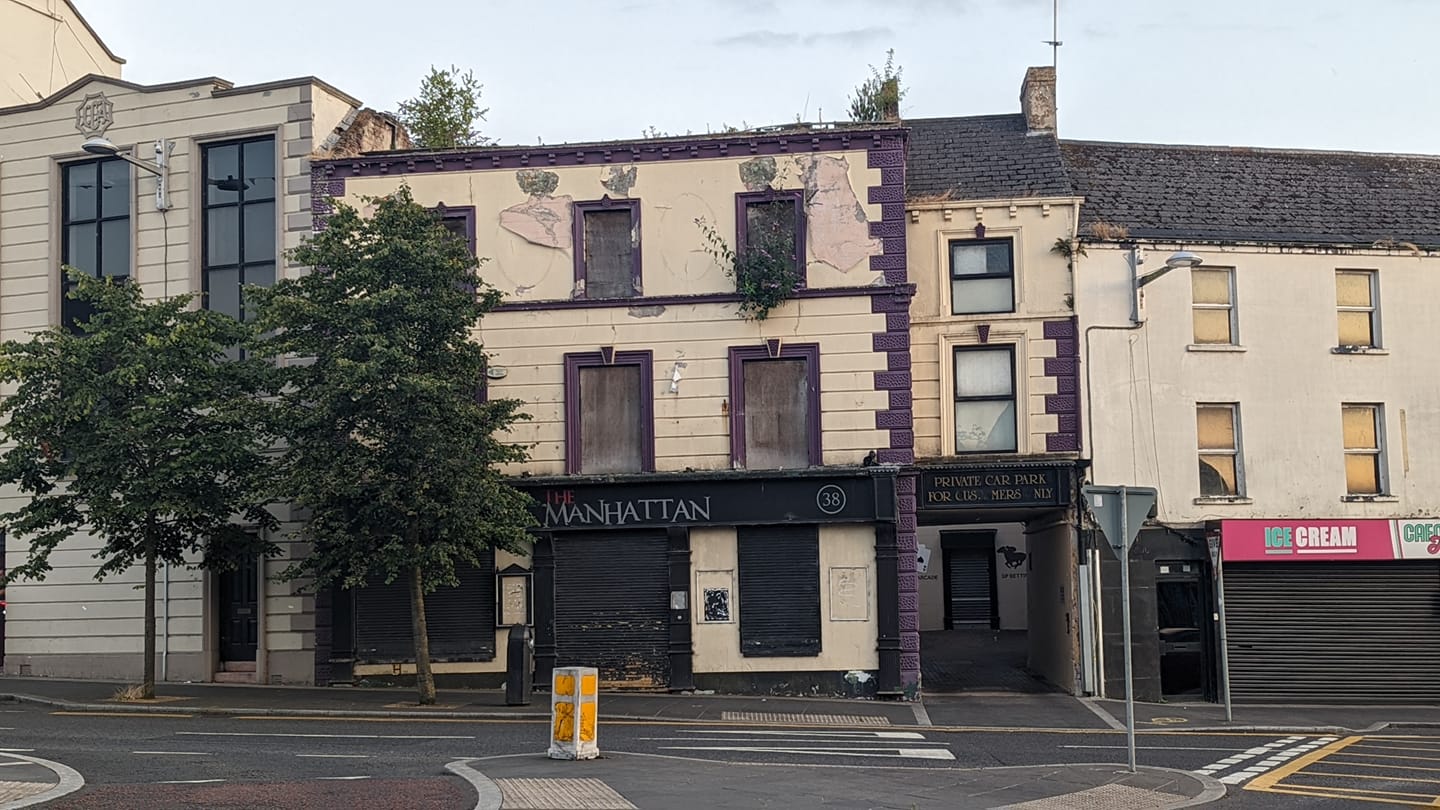 An historic County Armagh pub which was destroyed in a fire eight-and-a-half years ago looks set to rise from the ashes, Armagh I can reveal.

The famous Manhattan Bar, at the heart of Lurgan town centre, could be about to make a spectacular comeback.

A ferocious blaze back in 2014 left the property at Church Place – which was built in the mid-1800s – gutted.

But now proposals have been drawn up for the reinstatement of the bar and extensive rebuilding of this popular watering hole.

It will be largely similar in terms of facilities with public bar at ground floor, lounge bar on first floor and restaurant on the second floor.

There will also be a new lift installed too to allow for customers to move between floors as well as a protected staircase restored as part of the project.

It involves “alteration, conservation and renovation” works being carried out.

And, in terms of jobs, the application indicates numbers will be “as existing prior to fire”.

It was shortly after 5am on a Sunday morning in April 2014 that the alarm was raised that the Manhattan was on fire.

Originally it had been feared that there were people on the premises but fire personnel soon ruled this out.

A total of five fire appliances and over 40 firefighters spent hours battling the town centre inferno, using jet reels either side of the building to prevent the flames from spreading to neighbouring properties.

It took until almost 11am to bring the blaze under control.

The prominent landmark pub was well and truly gone and the property has remained vacant and unused ever since.

But now the three-storey building will be sensitively and lovingly restored and should once again come alive to the sounds of laughter, socialising and friendly bar-room banter.

Described in papers before council currently as a “vacant fire damaged public house”, all that could be about to change if the owners are given the go-ahead.

The plans would involve repairing the “historic fabric” of the building, with internal alterations involving the reinstatement of fire damaged floors and ceilings, roofs, and collapsed gables and chimneys.

Gas fired central heating, fire and burglars alarms will be installed, with rewiring throughout.

“Inappropriate and fire damaged windows” will replaced with alterations to the front of the building and to a number of door and window openings.

The fire damaged roof structures will be replaced and pitched roofs will be re-slated with natural Welsh slate.

The entire property will also be entirely redecorated throughout too.

The work will involve a significant investment by the owners to get the bar up and running again.

But the re-emergence of a popular haunt which many believed gone for good would be a huge lift for the town of Lurgan.

The proposals will now be advertised shortly with a decision expected in due course.