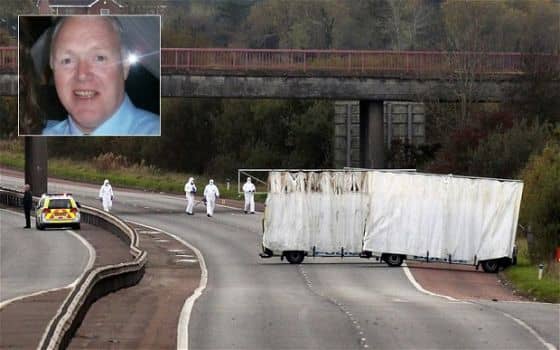 Detectives have welcomed the sentence handed down to a Co Armagh woman who lied about her former partner’s movements after he was arrested by officers investigating the murder of prison officer David Black.

Thirty-year-old Fiona McFadden, with an address at Killough Gardens in Lurgan, pleaded guilty today (Monday) to perverting the course of justice.

She was sentenced to 18 months in prison, suspended for three years.

All charges against her former partner were dropped by the Public Prosecution Service last July. And they also made a fresh appeal for information into the murder of the 52-year-old prison officer.

The father-of-two was driving from his home in Cookstown, Co Tyrone, to work at Maghaberry prison at 7.30am on Thursday, November 1, 2012 in his black Audi A4 car along the M1 motorway between Portadown (Junction 11) and Lurgan (Junction 10).

Detective Inspector John Caldwell said: “Approximately one mile from the Oxford Island exit ramp, a dark blue Toyota Camry car with a Republic of Ireland registration, 94 D 50997, pulled alongside and a number of shots were fired, fatally injuring Mr Black.

“The Toyota Camry was found burnt out in the Inglewood district of Lurgan a short time later at 7.50am.”

Continuing, Detective Inspector Caldwell said: “Police are still appealing for people to come forward with information. I am making a particular appeal to people in Lurgan to think about what they know and what they saw at the time of the murder.

“The dark blue Toyota Camry was in Lurgan prior to the shooting on the evening of 31 October and was set on fire about 20 minutes after David’s murder a few miles from the M1 at Inglewood on the morning of 1 November.

“A number of men were seen running away from the Toyota Camry car.

“I would urge anyone who can help us with this specific inquiry or who knows anything about David’s murder to come forward.

“I would remind people there is a reward of up to £10,000 available from Crimestoppers for information leading to the arrest and conviction of those responsible.

“I would also appeal to people in Cookstown to think about what they saw in the days and weeks before David’s murder. Did you see any unusual activity around David’s home or the places he frequented? If you have any information, please contact us.”

Information can be provided to detectives on 101 or anonymously to Crimestoppers on 0800 555 111.