A trip down memory lane for lovestruck Co. Armagh couple 60 years after tying the knot 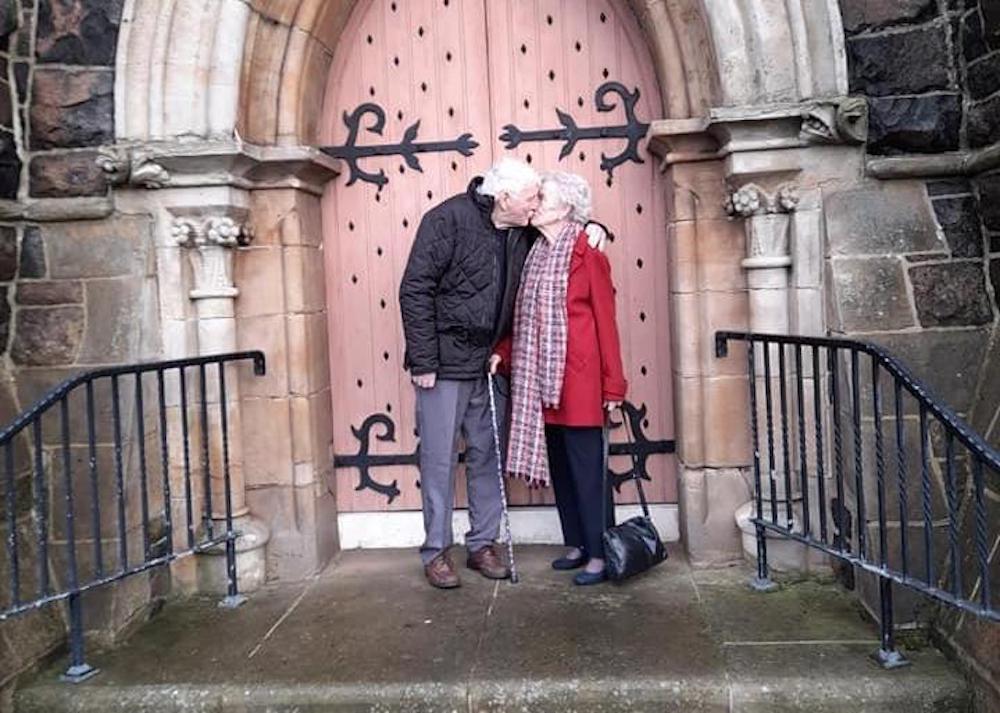 A Lurgan couple on their diamond wedding anniversary have retraced the steps of their nuptials sixty years to the day.

Walter and Eileen Mitchell said ‘I do’ back on December 10 of 1960 and have been inseparable ever since.

Speaking to Armagh I, a still-smitten Walter joked that his wife referred to him as her “toy boy” – being that he’s two years her junior.

Like many, their celebrations were perhaps not as grand as they would have been due to the pandemic, but their children Janice, Lisa, Walter and Tom made sure the date was marked.

The couple were taken down memory lane; first stop was Shankill Parish Church for a quick photo shoot before then heading on to Brownlow House, where they had their reception all those years ago.

Said Walter: “It was the kids that organised it all, I first caught on that they were doing something when they asked me for my marriage licence, the reason was for it to be sent to Buckingham Palace to get a card from the Queen.”

Unfortunately, the retracing of steps did not extend to the couple’s honeymoon.

“We left that night from Nutt’s Corner Airport to go over to London for seven days to see the Christmas lights, that was Eileen’s idea – that’s what she wanted to to do,” recalled Walter.

If you are a fan of soaps, you may have realised that one also celebrated 60 years on air this month. Walter and Eileen Mitchell on their wedding day, December 10, 1960

“I will never forget, the night before, the Friday night that was first time Coronation Street was ever on, everyone was watching that, I think she was but I was out with my brother for a stag night.”

The couple even had a very special call from Charlie Lawson, originally from Enniskillen, who is best known for playing Jim McDonald in the ITV soap opera.

The well wishers did not stop their either, along with a card from the Queen, they also received correspondence from Boris Johnson and video messages from DUP leader Arlene Foster, Health Minister Robin Swann and local DUP representative Carla Lockhart.

But topping the list for Walter was favourite music artist of all time, Charlie Landsborough.

They spoke at length on the phone, with the English country and folk legend sending Walter personally signed merchandise.

Interestingly, this was not the Mitchell clan’s first letter from the Queen for a diamond anniversary. Walter’s father, Tommy Mitchell, also reached the milestone, making it 63 years before his wife sadly passed away. “My dad was a well-known referee,” explained Walter, “he refereed the Battle of Belfast and internationals between England and Scotland and all sorts.

“I organised their anniversary, we had it at Brownlow House, there were about 120 there. I celebrated with just my sons and daughters but at the moment with Covid it is all about family.”

Asked for advice to others, Walter said: “There is no secret, It is two people working together, she’s there for me, I am there for her and the kids are there for both of us.”